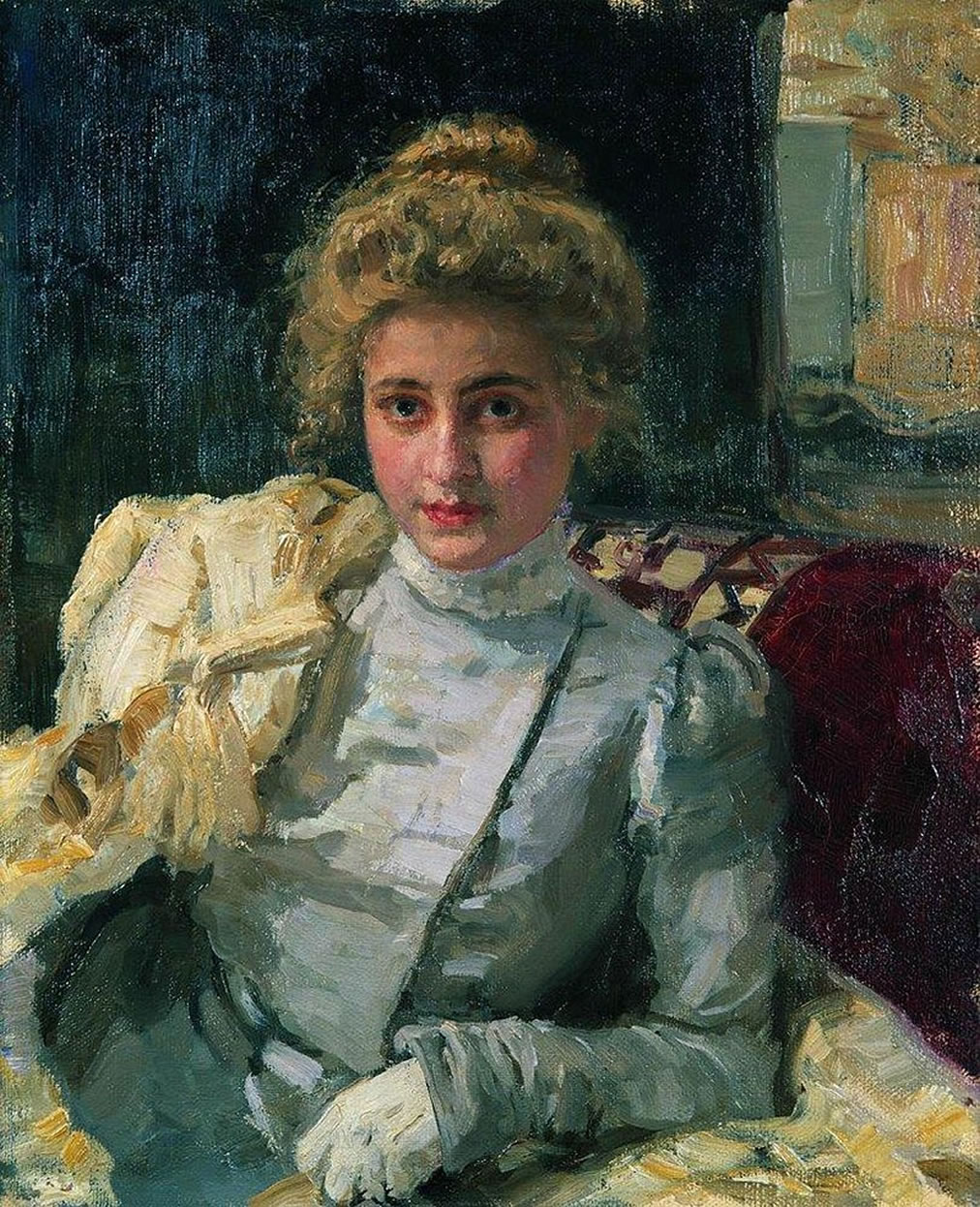 lya Yefimovich Repin (1844-1930) was the leading exponent of Russian realism. He was born in Chuguyev, in the Kharkov Governorate (now the Ukraine) and began his local apprenticeship by painting icons. But in 1863 he went to St. Petersburg Art Academy, met many painters later important, exhibited at the Paris Salon in 1874-6, and became an academician. Celebrated paintings followed: Reply of the Zaporozhian Cossacks (1891), Religious Procession in Kursk Province (1883), and Ivan the Terrible and His Son Ivan (1885). He became well off and purchased an estate, the Penates, in Kuokkala, Finland..


The machine code translation is:

In the evening, so golden and clear,
In this breath of spring the all-conquering
Do not remember me, my dear friend,
You are about love our timid and poor.

Breathes the earth with all its aroma,
The sky unfolds, only sighs;
The sky itself with the incorporeal sunset
In a quiet bay itself repeats itself.

What are we or our happiness?
How and think about it is not to be ashamed of?
In brilliance, which is no wider and more beautiful,
It is necessary to be mad - or to put up!

Afanásy Afanásievich Fet was the son of a Russian squire named Shenshín and a German wife, but the marriage, contracted abroad, was not recognised at home. It was not until 1876 that a royal decree allowed Fet to adopt the surname Shenshín, and in fact he kept the earlier name for his publishing life. Fet's progress was rapid. He published, at his own expense, a volume of poems in 1840 that showed little promise, but  was sending to the Moskvityánin some of his most perfect lyrics only two years later. He entered military service and served in various cavalry regiments for the next fifteen years. Promotion was slow, however, and it was only in 1856 that Fet could leave as Captain of the Guards and a title. After a short journey abroad, he married sensibly and settled down to make a success of his estate. Fet was exceptionally reserved, but his poetry was well received, making him one of the best-known literary figures in the 1850s, familiar with Turgénev, Tólstoy and other luminaries of the day The exclusively aesthetic nature of his poetry made him enemies among those promoting civic poetry, however, and in 1863, after the third edition of his poems appeared, Fet retired from the literary scene. Twenty years went by. After 1883 Fet occasionally issued small volumes under the title of Evening Lights, but he was never prolific, preferring to work instead on three volumes of memoirs and translations of the Roman poets. {2}

Fet was a devotee of the aesthetic aspects of poetry, and was appreciated as such by the creative writers of his time, but not by critics who saw these gently melodic pieces as little better than 'moonshine'. But for Druzhinin the chief property of Fet's talent was 'the ability to catch the elusive, to give an image and a name to what was before him nothing more than a vague, fleeting sense of the human soul, a feeling without an image and a name'. {3} After 1863, and especially in the 1880s, Fet's poetry becomes more difficult, metaphysical and condensed. {4} The greatest achievements in the last years were the love poems, remarkable in a man of seventy, but more so for the saturation of experience compressed into hard outlines. {2}

We could translate the lines as tetrameters, but their ternary or amphibrachic nature suggests the pentameter would be better: the lines have ten or more syllables. There should also be a quiet musicality:

Clear and golden is the sunlight’s end,
nor from their breaths the conquering springs withdraw.
Do not remember me, my dearest friend
nor think our love was all too shy and poor.

The breathing earth gives up aromas yet;
and sky unfolds into its breathy wealth:
rich and imperishable will all suns set,
and quietly, bay on bay, repeat itself.

What is happiness, and what is there
to feel ashamed about? Surely now because
of that great light and beauty everywhere
it’s madness not to take it as it was.