Nekrasov Poem: 'At the Entrance' 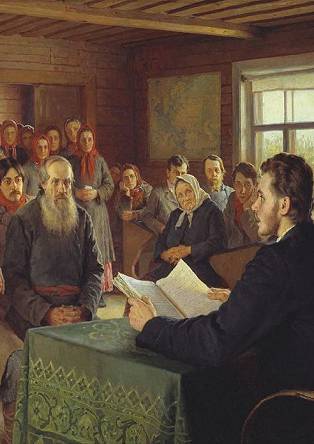 Sunday Reading at a Village School by Nicklay Bogdanov-Belsky 1895. {1} Bogdanov-Belsky (1868-1945)was active in St. Petersburg to the early 1920s, but then worked exclusively in Riga, Latvia. He became a member of several prominent societies, including the Peredvizhniki from 1895, and the Arkhip Kuindzhi from 1909. Most of the work is genre paintings, notably of the education of peasant children, portraits, but also includes some impressionistic landscapes and commissioned portraits, including those of the nobility and royal family. He died in Berlin. {2}

Here is the main entrance. On solemn days,
Obsessed with the slave's illness,
A whole city with some kind of fright
He drives up to the cherished doors;
Having written down his name and his name,
Guests go home,
So deeply satisfied with themselves,
What will you think is their calling!
And on ordinary days this magnificent entrance
10.They beset the squalid faces:
Spotlights, place searchers,
And an old man and a widow.
From him and to him then and know in the morning
All couriers with papers skip.
Coming back, another hums the "tram-tram",
And other petitioners cry.

Once I saw, the men came up here,
Rural Russian people,
Prayed at the church and stood in the distance,
20. Bracing fair-haired heads to the chest;
The porter appeared. "Allow it," they say.
With the expression of hope and flour.
He looked at the guests: ugly in appearance!
Tanned faces and hands,
Armchyushka skinny on the shoulders,
On the knapsack on the backs of the bent,
Cross on the neck and blood on the legs,
In self-made bast shoes
(To know, they walked a long time, they
30. From some distant provinces).
Someone shouted to the porter: "Drive!
Our does not like ragged rabble! "
And the door slammed shut. After standing,
The pilgrims were unleashed,
But the doorman did not let him in; he did not take a meager mite,
And they went, the sun of the palima,
Repeating: "Judge his god!",
Waving her hands hopelessly,
And, as long as I could see them,
40. With bare heads went ...

The poem is written in the ternary metre, generally amphibrachic (u-u),sometimes a little less regular. In the more lyrical sections the metre is probably better called dactyllic (- u u). The rhyme scheme is aBBa or AbbA:

Nekrasov's main theme was, as he put it, 'the suffering of the Russian people.' In this he was entirely sincere, though his own life was often very different from what he espoused — a reason perhaps for the bitter irony, gloom, distraction and guilty conscience that featured prominently. Yet, though subjective, that tortured compassion for his fellow men allowed Nekrasov to get inside his characters, identifying with their humour and native cunning as much as with the monstrous suffering they received at the hands of land-owners and officialdom. Sometimes he idealized the serfs, which could lead to sentimentality, and that flaw is not entirely missing from the later stages of this poem, where  Nekrasov turns his savage invective on:

You inhabiting great luxury
will in your deepest slumber see . . .
Who say that’s life’s a blessing all the same
with comfort and a need for name . .

The poem ends with:

Wherever people are, you’ll hear them sigh
and groan, so have the heart to ask them why.
You will wake and see and, gathering strength,
observe your destinies, obey what’s right
All you could have done is here at length
set down: I’ve made this aching song to light
the spirit on to its eternal strength.

A pentameter is suggested by the ternary rhythm — is indeed required to capture the content and strict rhyme. Nekrasov's verse is also a little rough, which I've tried to keep with:

We’re at the entrance now. A solemn date.
As though beneath the will of some enslaving rite,
the town compelled there out of fright,
they drive up to that all-compelling gate.

Thence, having written down their name and rank,
our visitors go home; each one
delighted with importance won
you’d think their status was the thing to thank.

On other days this most imposing entrance sees
10. a press of squalid faces, each aware
what words will do. An old man there,
or widow cursed by life’s infirmities.

Indifferent to them, shuffling papers, come and go
the buzz of various flunkies. Still they wait
all morning sometimes on this specious show,
while more petitioners besiege the gate.

And once I saw a group of men, our nationhood
of good plain rural Russian folk, each blest
by church attendance. They at distance stood
20. respectfully, with blonde head bent to chest.

They begged admission of the porter; he
observed how hope and terror had unmanned
each features. Ugly too, for one could see
the skin on hands and head was rudely tanned.

Armchyushka’s shoulder bones poked through, but shored
up heavy knapsack on his back.
One had a cross, another’s legs were scored
with blood, and sported shoes of bast.

(In fact they’d walked a goodish length, and some
30. indeed had come from distant provinces)
but someone shouted at the ragged scum,
affronted by life’s wearied instances.

The porter, therewith, in a proper fright,
rammed shut the door on such affray,
refused entreaties, and the pilgrim’s mite,
and stoutly sent them on their way.

‘May God who judges show what’s right,’
so said the hands there flailing helplessly.
I watched them filing out of sight;
40. It seemed their heads were bared eternally.