Russian Text and Machine Code Translation. At 180 lines, the poem is too long to be given in its entirety here, but opens with: {1} 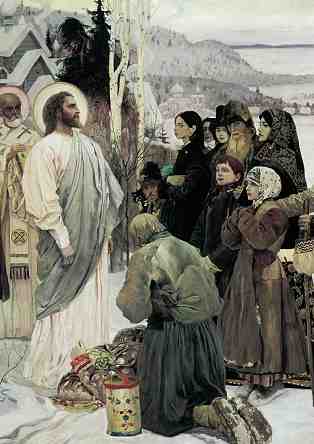 Holy Rus by Mikhail Nesterov 1901-06 Russia Museum {1}. Mikhail Nesterov (1862-1942) came from a strongly patriarchal merchant family, trained at the Moscow School of Painting, Sculpture and Architecture,and then entered the Imperial Academy of Fine Arts. He supported himself with magazine and book illustration until, in 1889, his 'Hermit' was purchased by Pavel Tretyakov and the artist was able to visit Austria, Germany, France and Italy. Nesterov joined a right-wing nationalist party in 1905, survived the Revolution and purges of the 30s to be eventually awarded the Stalin Prize and then the Order of the Red Banner of Labour.

All the rye is round, like the living steppe,
Neither castles, nor seas, nor mountains ...
Thank you, my dear,
For your healing space!

Behind the far Mediterranean Sea,
Under the sky is brighter than yours,
I sought reconciliation with grief,
And I did not find anything!

I'm not there myself: I'm muffled, I'm numb,
Not having overcome my destiny,
I ducked there before her,
But you have died - and I will,
Perhaps, to withstand the struggle!

I am yours. Let the murmurings be reproachful
Behind me on the heels ran,
Not heaven of a stranger to our homeland -
I wrote songs to my native land!

And now I'm avidly believing
My beloved dream
And in the sentimental send
All hello ... I find out

Severity of rivers, always ready
With a thunderstorm to withstand the war,
And even noise of pine forests,
And the villages are quiet,

And the fields are wide ...
The temple of God on the mountain flashed
And a childlike pure sense of faith
Suddenly he smelled like a soul.

The poem is written in tetrameters rhymed aBBa or AbbA, generally iambic, but with the occasional extra or missed syllable making it more dol'nik verse — unless this Nekrasov's rather casual versifying. {2}

The flavour of Russian country life is best grasped through the pages of Turgenev, Leskov, Chekhov and Bunin, but not the bald facts. Serfdom in fact arrived in Russia much later than in Europe generally, and survived longer. It was not a leftover from a feudal world, but a system gradually imposed in the 14th and 15th centuries as tsars created a more centralised state, and noblemen sought to protect their lands from Tartar depredations, particularly those from the Khanate of Crimea, the successors of the Mongol Golden Horde. Peasants were prohibited from leaving their lands in 1597, and flight was made a criminal offense in 1658.  Landowners could trade in serfs, i.e. sell serfs to neighbours, but not kill them. Runaway serfs had to be returned, and often suffered barbaric punishment.  ‘House servants for hire’ and similar advertisements applied to the sale of landless serfs. At Emancipation in 1861, some 10.5 million serfs were privately owned, some 9.5 million were in state ownership and another 900,000 serfs were under the tsar's patronage.

Serfdom was inefficient but gave political stability. The serfs had lifetime tenancy but little incentive to improve their land or lot. Unrest was frequent, moreover, and often exploited by Cossack uprisings, where the serfs sometimes took Cossack identity to escape bondage.

Change came gradually. Peter III’s measures in 1762 ended the compulsory military service for nobles which had served to justify serfdom, but many were nonetheless conscripted into the Napoleonic wars. An increasing proportion were ‘mortgaged’ to state credit associations: 20% in 1820 and 66% in 1859. The bourgeois were also allowed to own serfs for factory work: 52% of factory workers were in fact serfs by 1825. But serfdom was abolished from 1816 to 1819 in Estland, Courland, and Livonia, though  the land stayed in noble hands and labour rent lasted till 1868. Serfdom was replaced by landless laborers and sharecropping, where workers had nonetheless to ask permission to leave an estate.

The Great Emancipation of 1861 was on contentious terms, which only increased revolutionary pressures. The nobles kept most of the meadows and forests, and had any resulting debts forgiven by the state. Ex-serfs had to pay well over the market price for the small plots they kept, and such redemption payments were not abolished till 1907. Serfs also had to work for the landlord for two years, and landless serfs (domestic servants) naturally stayed landless. Alexander II's decree was in response to western ideas and the threat of widespread rebellion, but the social attitudes persisted. Serf families were strongly patriarchal, and marriages were often arranged, with landowner help if necessary. Agricultural and domestic jobs were group efforts, with the wage going to the family, supplemented by factory earnings if children had left the land. Livestock and land were in the husband's name, but wives were responsible for clothing and home utensils.  {3-4}

The real difficulty with Nekrasov is reproducing the tone: how formal or colloquial should it be? A point in question is line 3. Literally speaking, Спасибо, сторона родная, means simply Thank you, my dear — which I have expanded to meet stanza requirements as My dear, in gratitude accept. I'm also not wholly happy with Not heaven by foreigners belied, which is anything but idiomatic, but tight rhyme schemes create many problems in Russian verse translation. Clearly, the piece needs much more work.

The rye’s around, the breathing steppe:
no forts or seas or stony place.
My dear, in gratitude accept
my thanks for this remedial space

The Mediterranean brought relief
for sky is brighter there than yours
I, who would make good this grief,
found nothing there but barren shores.

I had no business there, was numb
at destiny, what we must do
have to these poor evasions come.
Though you have died, and I will too,
I will see this contest through.

I’m yours: let murmurings not chide
me, though it’s on my heels I go.
Not heaven by foreigners belied,
I write of native lands I know.

Belief in you I’ll not suspend,
that dream I love and apprehend.
And in my touching you I send
such truth in finding, to the end.

How fast and hard the rivers run,
and me from thunderous war defend.
The trees and houses have begun
to settle to their quiet end.

God’s temple on the mountain smiled
with blessings, and the fields are broad:
So faith, which is a little child,
became a soul and dwelt in God.