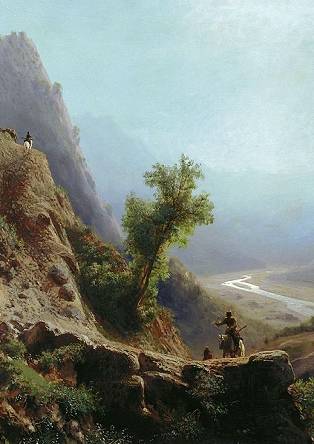 In the Caucasus Mountains by Lev Lagorio 1870 (53cm x 76cm) {1}
Lev Lagorio (1826-1905) was the son of Genoese merchant serving as Vice-Consul for the Kingdom of the Two Sicilies. He received his first art training in the studios of Ivan Aivazovsky but later attended the Imperial Academy of Arts. In 1852 he became a Russian citizen, visiting Paris (1853) and then Rome (1853-59) before settling in Russia as a full professor. {2}

The Caucasus is under me.  Alone in the sky
Standing over the snows at the edge of the slopes;
Eagle, with a distant rising of the top,
It floats motionless with me on a par with.
From here I see the stream's birth
And the first terrible landslides movement.

Here the clouds humbly walk beneath me;
Through them, overthrown, noisy waterfalls;
Beneath them are cliffs of naked masses;
There below the moss is lean, the bush is dry;
And there are already groves, green canopies,
Where the birds chirp, where the deer leap.

And there too people nest in the mountains,
And the sheep creep along the grassy slopes,
And the shepherd descends to the cheerful valleys,
Where Aragva rides in shady banks,
And the poor rider lurks in the gorge,
Where Terek plays fierce fun;

He plays and howls like a young beast,
Seen food from an iron cage;
And it strikes against the shore in a feud of useless
And licks the cliffs with a hungry wave ...
Here it is!  there is no food for him, no consolation:
The threatening dumb masses are pressing.

PoemHunter has this unattributed translation, perhaps not in a contemporary style but useful nonetheless: {2}

The Caucas lies before my feet! I stand where
Glaciers gleam, beside a precipice rock-ribbed;
An eagle that has soared from off some distant cliff,
Lawless as I, sweeps through the radiant air!
Here I see streams at their sources up-welling,
The grim avalanches unrolling and swelling!

The soft cloudy convoys are stretched forth below,
Tattered by thronging mad torrents descending;
Beneath them the naked rocks downward are bending,
Still deeper, the wild shrubs and sparse herbage grow;
But yonder the forests stand verdant in flora
And birds are a'twitter in choiring chorus.

Yonder, cliff-nested-are dwellings of mortals,
There pasture the lambs in sweet blossoming meadows —
There couch the herds in the cool deepening shadows —
There roar the Aragua's blue sparkling waters,
And lurketh the bandit safe hid in lone caverns,
Where Terek, wild sporting, is cutting the azure!

It leaps and it howls like some ravening beast
At first sight of feeding, through grating of iron —
It roars on the shore with a furious purring,
It licks on the pebbles with eagerest greed.
Vain struggle and rancor and hatred, alas!
'Tis enchained and subdued by the unheeding mass.

The Caucasus is written in ternary tetrameters, rhymed abbacc. There there is no constant pattern to masculine and feminine rhymes, though they tend to aBBaCC.

Translation is straightforward if we dispense with feminine rhymes:

Below, the Caucasus. To view
comes crest on crest without a pause,
that from a cliff, an eagle soars
as solitary as I am too.
Here mighty rivers have their birth,
and rockfalls thick with snow and earth.

The clouds pass humbly underneath,
and here the noisy waterfalls
give way to bare rock mountain walls
with thin, dry moss, a upland heath
that, lower down, sees deer and trees
and birds singing in green canopies.

Folk live within these mountain flanks,
sheep meditating in the grass.
Through sunny valleys shepherds pass
as Aragvi shady banks.
No riders are by gorges sought,
where Terek brims in fearsome sport.

It howls, an animal that's grown
incensed by food beyong its cage.
It rasps the shore with frothing rage
as thirsty for the driest stone.
No food or comfort come, but force
to hold it to a senseless force.

That is a little free and omits several key words, but let's press on. We have two problems still: the feminine rhyme and the amphibrachic metre. The first I don't propose to consider: there is nothing mannered or playful about the tone of this poem to make the feminine rhyme appropriate. The metre is another matter: The amphibrachic is common in Russian verse but scarce in English, even as an unstressed syllable plus anapaestic measure (x   | | - x x  | - x x  | - x x as in Byron's The As sy  | rian came down | like the wolf | on the fold, |) or iamb plus dactylic measure (x - | |  x x - | x x - | in Tennyson's Half a league, | half a league, || | Half a league | on ward). {4} The dirge-like dactylic hardly seems appropriate but 'Caucasus' has a natural falling rhythm, as does 'solitary'  Since ternary rhythms are common in Russian verse, and we shall need some approximations when translating Nekrasov and others, it is worth seeing what can be done. The following is not entirely regular, and for several reasons. Entirely x - x metres are difficult to write in English, and appear not wholly natural, indeed bravura pieces. And, in practice, even Byron slows the rhythm with When the blue wave rolls nightly on deep Galilee. So:

A few lines are passable, perhaps, but the rhythm overall is gullumping and contrived. More work might mend matters a little, but reproducing the amphibrachic in English will always produce something like this. As we noted with the feminine rhyme, what works in one literary tradition won't necessary work in another. The solution is not 'free verse' I think, as the form is alien to Pushkin, and indeed all Russian poetry till comparatively recently, but another variety of the iambic. This most flexible of forms, the great workhorse of English poetry, can be adjusted is various ways, and here I'd suggest we try to get closer to the meaning, where I think a paraphrase will be acceptable at times, as Pushkin does not achieve his effects by image and metaphor but through 'le mot juste', by finding the exact word . {5}

Round me are the Caucasus:
I stand upon great slopes of white.
An eagle distant, out of sight,
soars solitary as one of us.
Here great rivers have their birth,
and avalanches, threatening earth.

From clouds, a humbly moving coverlet,
long drops with thunderous waterfalls
to echoing chasms of mountain walls:
thin moss and with dry bushes set.
Below, thick canopies of green
with leaping deer and birds unseen.

People nestle in these mountain flanks,
and sheep that venture slopes of grass.
Through cheerful valleys the shepherds pass
as Aragva through shaded banks.
No horseman keeps to gorge today
while Terek boils in dangerous play.

An animal that howls the more
that, seeing prey beyond the cage,
its strikes can be but helpless rage.
It scours the cliffs with hungry paw
but, twisting to a headlong force,
the huge rocks hold it to its course.

But of course we are rendering the Russian tetrameter as an English tetrameter, forgetting that the amphibrachic tetrameter has some ten or eleven syllables, i.e. is closer to the pentameter in length. So:

Around me loom the Caucasus: a constant view
of snow-draped cliffs and slopes, where now my eyes
pick out an eagle, solitary, whose distant rise
will leave it motionless, where I am too.
In these great heights whole rivers have their birth,
and levelling avalanches, threatening earth.

The humble clouds spread out, to cover all below
but give a glimpse of thunderous waterfalls
that echo emptily through mountain walls.
Here mosses starve and shrivelled bushes grow.
Beneath are groves, rich canopies of green
where deer leap and birds sing on unseen.

And there are people nestled in these mountain flanks,
and sheep that venture down long slopes of grass.
How cheerfully through valleys shepherds pass,
as must the Aragva through shaded banks.
No timid horseman takes the gorge today
while Terek leaps and foams in troubled play.

An animal it is, that howls the more
for prey outside the iron bars of cage,
although it strikes at banks with helpless rage.
Along the cliffs it runs its hungry maw
but finds no food or rest: the senseless force
of huge rocks holds it on its headlong course.

The Caucasus is one of Pushkin's southern exile pieces. In 1820 he wrote his 'Prisoner of the Caucasus' poem, which became enormously popular, but his political verse and lampoons nonetheless earned the deep distrust of Alexander I. From 1820 to 1823, Pushkin was exiled to the Caucasus and Crimea, where wrote 'The Fountain of Bakhchisarai'. {6}  Pushkin was then recalled, but a revealed interest in atheism earned him a further two years of exile, now on his mother’s estate near the north-west frontier town of Pskov, where he wrote most 'The Gysies'. With the accession of Nicholas I, Pushkin was again  recalled from exile, married and found a nominal position at court, more as the husband of the impecunious beauty Natalya Goncharova than on his recognised merits. {7} The 'Caucusus' belongs a later cycle of poems, published in 1836. That southwest-trending mountain range now occupying parts of Georgia, Armenia and Azerbaijan, is linguistically diverse terrain, {9} and was even more so in Pushkin's day. Its peoples were fiercely independent, and therefore trouble to the Russian government right through to their 'pacification' in the protracted Caucasian Wars (1817-64). {10} Artists saw the area differently, delighting in the romance of a country so different from the unchanging steppelands, matched by a wild history and clash of  colourful peoples, each with their strange customs and exotic dress. More than anyone, however, it was Pushkin who created its literary character. {11}. His  Prisoner of the Caucasus (1822) was inspired by the poet's exile in Pyatigorsk, and successfully worked in Romantic and Orientalist themes around the Byronic figure of a Russian officer captured by tribesmen but rescued by a beautiful Circassian woman. {11} Despite its obvious Romantic and Orientalist themes, borrowed in part from Chateaubriand, Pushkin's use of academic footnotes and reliable ethnographic material his Prisoner gave the poem almost factual credibility. {12} It was highly influential on popular perceptions of this troublesome region. The poem indeed remains one of Pushkin's most famous works, and is often referenced in Russian popular culture, in films such as the Soviet comedy Kidnapping, Caucasian Style.

By 1818, Pushkin had acquired the accent that is his alone. The early poetry, that of Ruslan and Ludmilla, for example, was cold and brilliant, astonishingly assured by technical standards, but essentially French, depending on the exact word and use of metonymy and similar figures of speech rather than any persausive emotion. His greatest successes were Prisoner of the Caucasus (1822) and The Fountain of Bakhchisaray (1824), where the form (verse and diction) were perfect but more impressive than the content. Byron was an inspiration, here, but not much of an influence:  Eugene Onegin has none of the sweep and satiric power of Don Juan. The first chapter is the crowning achievement of Pushkin's youth — brilliant, light-hearted and ebullient, growing slowly into the resigned and muffled tragedy of the eighth chapter. It has spontaneous vitality and an unerring sense of artistic measure, plus that peculiar Russian realism that is poetical without idealising anything way from reality — one which continued in Lermontov, Turgenev, Chekhov and Bunin. {15}

Caucasus is a little later, appearing in the 1823-36 collection, which includes impressions of journey Pushkin made to the region between May and August 1829. {13} Here again there is the love of freedom, denoted by the eagle and the turbulent Aragvi and Terek Rivers. The Caucasus is still a breath-takingly beautiful place, of course, {14} and Chechnya independence continues to trouble Russian autonomy. {16}

The Caucasus ends on the point of saying more, and Pushkin did indeed write an incomplete stanza that would have been difficult to publish at the time. It was added to the 1936 collection of his works, and runs: {8}


So long is liberty oppressed by laws,
so will the tribes resist until they're free:
at length the smoldering Caucasus will be
unburdened by this monstrous foreign cause.