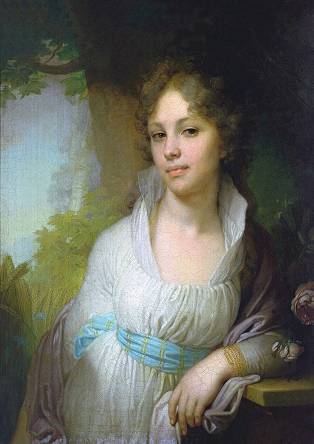 Portrait of Maria Lopukhina by Vladimir Borovikovsky. 1797 Oil: 72 cm x 53.3 cm Tretyakov, Moscow. {1} Borovikovsky (1757-1825) was born Vоlоdymyr Borovyk in Myrhorod (now the Ukraine), the son of a Ukrainian Cossack and an amateur icon painter. All four of his sons served in the Myrhorod regiment, but Volodymyr retired early, and took up icon painting for local churches. So he might have remained but for the commission from his friend Vasyl Kapnist for two allegorical paintings, which so pleased the Empress Catherine II that she asked the artist to take up residence in St. Petersburg. Accordingly, Borovyk changed his name to the more aristocratic Borovikovsky, and became a popular and prolific portrait painter, running a large studio and turning out some 500 works. {2}


I love you, even though I'm in a rage,
Although it is labor and shame vain,
And in this stupid unhappy
At your feet I confess!

I can not face and not for years ...
It's time, it's time for me to be smarter!
But I recognize all the signs
The disease of love in my soul:

When I hear from the living room
Your easy step, il dresses noise,
Or a virgin, innocent voice,
I suddenly lose all my mind.

You will smile, - I feel good;
You turn away, I am longing;
For the day of torment - reward
Me your pale hand.

When behind the hoop diligently
Sit you, leaning casually,
Eyes and curls omitted, -
I'm touched, silently, tenderly
I admire you as a child! ..

Shall I tell you of my misfortune,
My jealous grief,
When to walk, sometimes, in a bad weather,
Are you going to the distance?

And your tears are on your own,
And speeches in the corner together,
And travel to Opochka,
And the pianoforte in the evening? ..

Alina!  have pity on me.
I dare not demand love.
Perhaps, for my sins,
My angel, I'm not worthy of love!

But pretend!  This look
Everything can express so wonderfully!
Ah, it's not difficult to deceive me! ..
I'm happy to deceive myself!

And the central section rhymes :

Russian society was essentially composed of two classes, the aristocracy and the peasants. The middle class of merchants, professional and the intelligentsia naturally feature strongly in Russian literature, but was a small and rather ephemeral entity, arising largely in the 19th century, disappearing again after the 1917 Revolution (and now reappearing as Russia develops into a 21st century country, though very unequally).

The  Boyars were the old Russian nobility — grand dukes, dukes, princes, counts and barons — usually landlords with large estate who were also engaged in commercial activities licensed from the state. Industrial activity grew in the 18th century: mines, textiles, factories run on steam power. The richest  lived a lifestyle to rival the tsar's, and their splendid palaces were speedily requisitioned by the communist state. The nobility that couldn't make a living from their estates entered the civil service or the military.

The Russian aristocracy enjoyed social gatherings at their estates, picnics in the country, and trips to the seashore. Some escaped the Russian winter by heading to warm climates in Venice, the Crimea and southern France. The spa of Baden Baden in Germany became popular with rich and influential Russians after the czarina Elizabeth took regular vacations there with her huge entourage. Tolstoy visited, Turgenev carried on his perpetual affair with a Spanish diva, and Dostoevsky gambled away the money he obtained from pawning his wife’s wedding ring, recounting the experience in his novel The Gambler. {11}

Society became less rigid in the later nineteenth century. The civil service and the military (colonel in the army, captain the navy, or its equivalent) offered a path to ennoblement, and, conversely, estates were sold off by noblemen moving into business or hard times. Some 70% of officers were of peasant origin by 1917.  Philanthropists, businessmen, and others who had rendered service to government and society were also ennobled, or rewarded by membership in the privileged honored citizen category, and these groups became more diverse over time, including Conservatory graduates from the 1890s. {12-13}

The poem is a favourite of Pushkin lovers, and has been widely translated. {2-7} The crucial question is how seriously we're to take the inveterate womaniser, the scamp who bragged of 113 great loves before marriage. {9} I take the poem as a waggish piece, with tongue firmly wedged in cheek, and so replicate the feminine rhymes. A more charitable view would be simply to take it as accomplished light verse, which was popular in Pushkin's circle. {10}

Enraged by you, for you I sigh
even as my love is shaming.
Against my will am I proclaiming,
vanquished, at your feet I lie.

Away from you I’m bored and yawning,
with you sad, though I endure
again a passion that is dawning
in my soul for one so pure.

How innocent that girlish chatter,
then I hear your step next door:
instantly my poor wits scatter:
what is all this longing for?

You smile, and happiness I’m feeling:
turn away and dark is day,
but at the torment I’m revealing,
one pale hand is all you pay.

Diligent, you’re bent to needle:
against that look the heart proves feeble.
By those eyes and curls beguiled
that I’m astonished, of all people,
wondering at you as a child.

Should I tell you, when together
of the jealousies I know,
or when you walk in frightful weather
I dread the distances you go.

And in the carriage to Opochka
with tears so silent, out of sight,
the corner piece must be the watcher,
as at piano late at night.

I do not dare to ask for love.
Pity me, my dear Alina.
For every sin and misdemeanour
I beg alone of Him above!

My angel: let's pretend it’s so.
How easily you could deceive me
when, my darling, please believe me,
truly I'd not care to know.

Confession was written while Pushkin was still popular, wildly so before his marriage in 1830. The twentieth century sees what was published later as his crowning achievement, but the public of the time was less enthusiastic. His Boris Gudunov (1831) was met with faint praise and loud blame, and by 1834 Pushkin was seen by the younger generation as a relict of the past. Pushkin was never a Romantic, moreover, and the profundity beneath the light touch has often been compared to Mozart: Russian literature, we have to remember, was a decade behind that of the west. {12}