This third and final book of 'That Still Abiding Fire' is again modelled on Dante's Divine Comedy, and again uses the terza rima form, but now showcases those who give themselves to art and aid of fellow human beings. Here the climb is from the misery and depravity of Book Two to the only heaven that human beings can know on this earth: those of altruistic love and artistic expression. 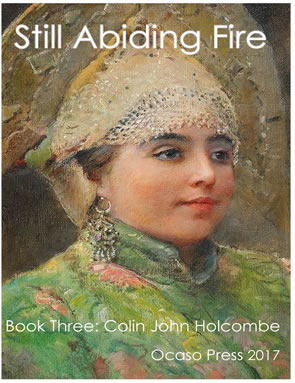 The first to appear is Alexander von Humboldt, the famous explorer and naturalist, who uses his practised sense of honesty and close observation to appreciate the wonders of the world around. Robert Herrick follows, whose eventual acceptance of a country living reconciles him to the dreams and ambitions of youth.

Then comes Stendhal, with his keen appreciation of the feminine, which he would make into a theory of love, of a loved one who is both true and illusory. With Alexander Scriabin and Sergei Rachmaninoff we come to the most abstract of the arts, which is nonetheless continually fighting against the void. Musical composition is the rarest of gifts, and its practitioners often live of the edge of madness. William Orpen was a painter, a dazzlingly successful Edwardian society painter, but he was also Irish and possessed of a troubling social conscience, through which he felt a kinship with the millions sacrificed in the First World War.

Tamara Platonovna Karsavina, a noted Russian ballet dancer,joined the Ballets Russe when revolution swept over her country and destroyed much of what she held dear. Ivan Bunin was also a refugee from Russia, and wrote the most nostalgic depictions we have of old Russia. He became displaced once again when Germany invaded France, his new country of adoption, but never ceased writing.

Dr. Rosemary Walker is the one fictitious character here, but exemplifies the selflessness of foreign aid workers. Marcel Proust's search for time past and recovered comes next, and then Giacomo Leopardi, for whom the present was only pain and boredom. Sri Aurobindo solution was to turn away from the world of the senses, as Indian mystics commonly do, and discipline himself to feel some further deity of all-encompassing love. Rainer Maria Rilke, that most lonely of men, who made poetry out of that loneliness, rounds off the artists depicted.

The book starts with an Introduction and ends with an Envoie, both placing the figures in their larger setting and summarising the themes of the earlier books.

Time takes and moves us dreaming pieces on
as though its measures were that smiling face
that we remember when all else is gone.

Why ask of purpose in this hurtful place
that tells of other ways than what we are
when first of inwardness and childhood grace?

And yet there stays for us perhaps some star
whose homewarding will shed its upright light
and guide belatedly, if from afar.

Some house or hill or tree, some common sight
we saw unchanging on our evening strolls
that yet will reverence its keepsake rite.

Not part of us, it's true, but which consoles
us when we see some tended wayside shrine
that speaks of comradeship in passing souls.

The rest we do not know. The swelling line
of those who've gone before is endless night,
and hopes still-born in us make bitter wine.

Yet lives are various: each morning's bright
with dowered majesty that's plain enough,
if all the rest evade our mundane sight.

But these went questing on, a pathway rough
or smooth, ascending suddenly, or kept
to honest byways and parochial stuff.

They gave their lives to that, and overstepped
the settled limits of their scope and time,
to stare out earnestly while others slept.