Tiutchev's poetry seems insubstantial, hardly worth the writing down: {1} 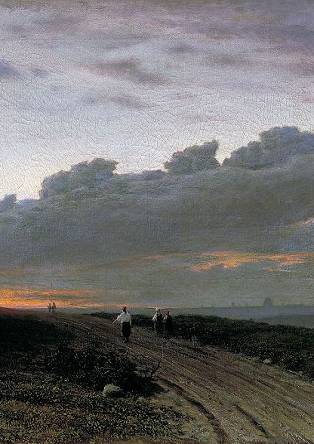 
Is in the lordship of the autumn evenings
A charming, mysterious charm! ..
The ominous brilliance and variegation of trees,
Scarlet leaves languid, light rustling,

Foggy and quiet azure
Above the sad-orphaned earth
And, like a premonition of coming storms,
A gusty, cold wind sometimes,

Damage, exhaustion - and everything
That gentle smile of wilting,
That in the rational being we call
Divine bashfulness of suffering! ..

Outwardly, Tyútchev's was one of the most unpoetic of lives. He was born into the ancient nobility, educated at the University of Moscow, and entered the diplomatic service, remaining abroad in Europe for the following 22 years. He married a Bavarian member of the aristocracy and regarded Munich as his true home. He corresponded with Heine and Schilling, sent some verse to Pushkin's Sovreménnik over the 1836-38 period, where they were published over the signature of 'F.T.' but attracted no attention. Tyútchev lost his first wife but married a second time, again to a Bavarian, and was posted to Turin, which he detested. Without permission he left his post of chargé d'affaires, and was expelled from the diplomatic service, settling as a private citizen in Munich. In 1844 he returned to Russia and there obtained a post in the Censorship. In 1854 his poetry first appeared in book form, but Tyútchev was now a pugnacious and hardened reactionary: the poems were strongly nationalistic and Slavophile, making 'painful reading' for liberal opinion. In 1873 he died, after a stroke that left only his brain operational. {2-3}

Tyútchev was rediscovered by Nekrásov, and remains celebrated for the intense love poetry that has a passion and poignancy like nothing else in Russian.  They were written for Mlle Denísieva, his daughter's governess, with whom he had an affair that tainted his reputation and ruined hers. When, in 1864, Mlle Denísieva died, Tyútchev was plunged into grief and despair, his guilt only sharpened by the forebearance shown by his wife and the brilliant figure he still cut in society as Russia's greatest wit and conversationalist . The poems are the more remarkable in that he used Russian infrequently: his wives did not speak Russian, and Tyútchev's everyday speech and correspondence was in French. {2-3}

Tyútchev is now regarded as the true descendent of Pushkin: the little poems sent to Sovreménnik are known by heart across Russia and the love poems speak with an anguished directness that no one will envy. All the poetry, except some the savage invective of the political pieces, which sometimes rise into true eloquence, is pantheistic, profoundly pessimistic and dualistic, indeed Manichaen. The Cosmos around us is always at the mercy of Chaos. Our existence here is fleeting and precarious. Tyútchev's Russian is a little more archaic than Pushkin's, and he has none of the great poet's range, but the romantic style marries vivid imagery with classical order. {2-6}

In the light of John Dewey's excellent Mirror of the Soul: A Life of the Poet Fyodor Tyutchev (2010, Brimstone Press, but kindly made available as a free Pdf ebook at http://www.tyutchev.org.uk/ MOTS.html) {7} the biographical notes here and on the second Tyutchev webpage are very incomplete and somewhat misleading. Tyuchev is not the dry civil servant who unaccountably managed to write some of the greatest lyrical poetry in Russian, but a much more complex individual: the polished diplomat but also sensitive student of poetry from his earliest days, a serious-minded and gifted man, but also impractical, somewhat lazy and with a genius for romantic attachments that caused no end of grief. I will try to update this note in due course.

We have to convey Tiutchev's restraint and musicality, perhaps as something like this:

What lordly airs the autumn evening has;
what charms are here, mysterious and sweet.
The trees in brilliant reds are various
as leaves fall soft, unthreatening at our feet.

A blue that’s lightly touched with fog now forms
above this sadly-orphaned forest spot:
a premonition too of coming storms,
of cold and gusty winds, as like as not.

Exhaustion, injury, a going hence,
from everything a smile that’s fading out:
and some intelligence around we sense
as modesty in suffering, and devout.