Silentium is a well-known poem that anticipated Symbolism. The Russian is: 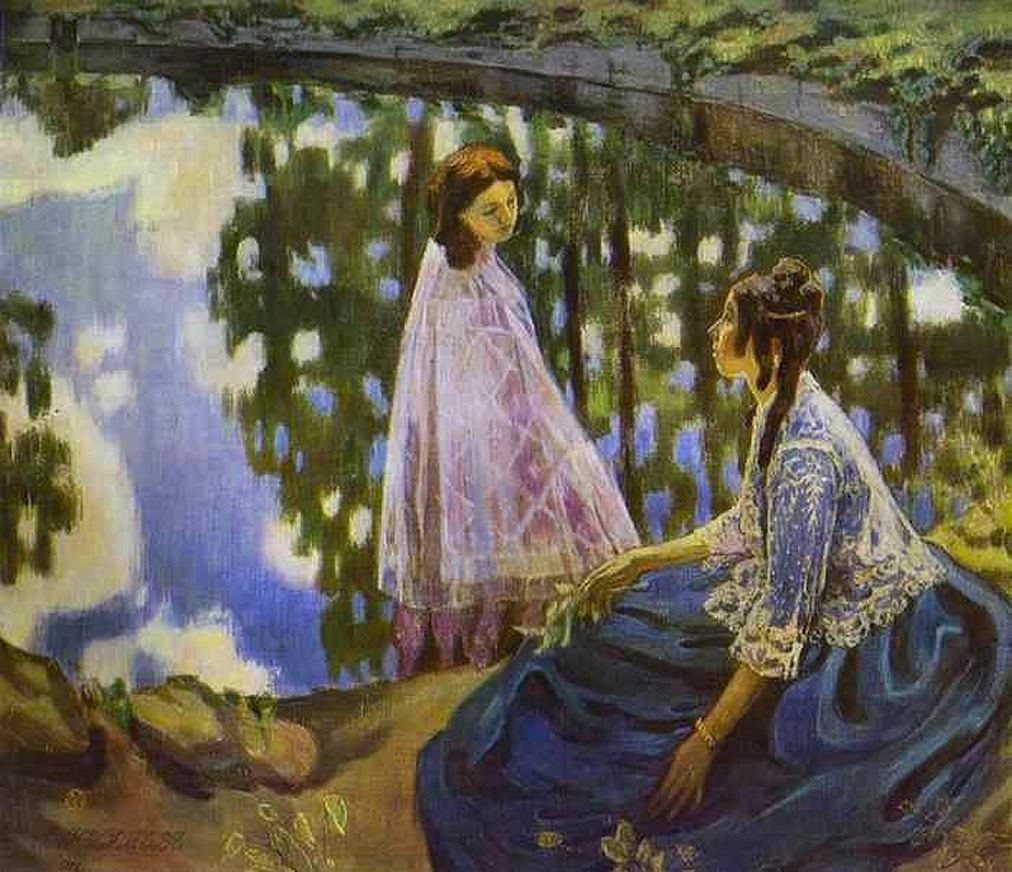 The Pool by Borisov Musatov 1902 (177cm x 216cm) Tempora. Tretyakov Gallery, Moscow {1} Musatov (1870-1905) was born in Saratov, Russia. A childhood injury made him a humpbacked, and his health was never good anyway. He was also plagued with money troubles till the last years of his life, when his work began to sell. Borisov-Musatov returned to Russia in 1898 and was almost immediately overcome by its 'fin de siècle' world-weariness, from which he escaped into  a half-illusory world of the 19th century nobility, their parks and country-seats. {2-3}

Shut up, hide and hide
And your feelings and dreams -
Let it be in the depths of the soul
Get up and go ona
Silently, like the stars in the night, -
Admire them - and be quiet.

How can you express yourself to your heart?
How else can another understand you?
Will he understand what you are living?
The thought that is uttered is a lie.
Blowing up, disturbing the keys, -
Eat them - and be quiet.

Only to live in yourself,
There is a whole world in your soul
Mysterious and magical doom;
They will be deafened by outside noise,
Daytime disperses the rays, -
Listen to them with a whip - and be silent! ..

The piece is written in iambic tetrameters, generally rhymed aabccb, though lines 4 and 5 end in feminine rhymes and are a little irregular. Strictly, they should be scanned as:

but perhaps can be read as:

Otherwise, the poem is regular:

Though Tyútchev professed to see his poetry as a pastime, it has a distinctly metaphysical flavour, where nature is a process, something that extracts order from chaos, as do the Greek myths he sometimes incorporated, and the German philosophy he read. Man's psyche, or 'soul' as he called it, is one of vague troubles, inarticulate aspirations, dilemmas or even perversities. The psyche is aroused at dubious hours and in abnormal states: in insomnias at night, in dreams or over storm-ridden seas. The nighttime sphere gradually emerged in his  thinking as the primordial chaos in the myths of antiquity. In Silentum, the abyss of the ineffable is not the outer world but inside. {2-3}

The nature poems reflect a spontaneous love for the earth, which is expressed in direct statements. Many poems express no more than moods and aimless meditations, often at the turning points of the seasons: spring brings elation, joy and promise, the autumn brings melancholia and reflection. The style throughout is elevated -- solemn and rhetorical in the earlier pieces, with some eighteenth-century relish for pointed comment, but later less formal. All the work was musical, and much is to a consistently high standard, though of course reactionary to liberal opinion in the late pro-Slavic poetry. 'Silentum' anticipated Symbolism. {2-3}

As in the Autumn Evening, Tiutchev's musicality is what we have to aim for:

Be silent, hide yourself, conceal
the things you dream of, things you feel:
As the stars in motion, let
these marvels from ascension set.
Let depths of soul then stay unheard.
In awe reflect without a word!

The flowering heart is not divined
so can some other know your mind?
Or say what you are living by
when words once spoken are a lie?
The water’s clouded when it’s stirred,
so drink the spring without a word:

So live within your self’s control:
a world is centered in your soul:
a world of strange enchanted thoughts
that noisy flare outside distorts.
By day’s hard glare be undeterred
take in those songs without a word