Anna Akhmatova's All Is Traded


The poem 'All is Traded ' was written in 1921, which was a difficult year for Akhmatova and Russia in general. The Bolsheviks were still expelling the remnants of White armies in the south of Russia, and a naval mutiny at Kronstadt was followed by peasant revolts. The White Army was dangerously active in Siberia. Red Army attacks on enemy sympathizers increased in ferocity throughout the year.

After her divorce from Gumilev in 1918, Akhmatova and Gumilev's son found themselves without ready means of support. Akhmatova did receive help from Natalia Rykovoya, however, to whom the poem was dedicated. Natalia's father was in charge of an experimental farm in Tsarskoye Selo, which intermittently provided Akhmatova with an island of normality in the surrounding sea of imposed social change. 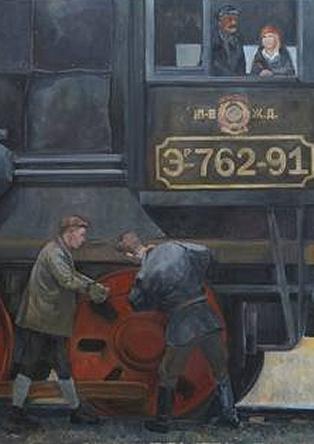 Akhmatova did not accept the Revolution, nor choose to hide her detestation. She bitterly resented the collapse of the old social order, and hoped for its return. The Soviet authorities therefore looked very unfavourably on her work, and the present poem was published only because it seemed to look forward to better times in Russia.

In fact, it was hopes of better times for Akhmatova's family that she was writing about, which proved largely illusory. Life thereafter was even harder. Her son by Gumilev was eventually imprisoned, and her common-law husband died in the gulags.


Analysis of Poem All Is Traded

The poem is in tertiary rhyme, rhymed AbAb but in slightly irregular anapaests:


Previous Translations of 'Song of the Last Meeting'

Ruverses have five renderings. I give the first stanza of each:

All is sold, all betrayed, all is looted;
Death’s black wing has flashed past in its flight.
All is gnawed by a hungering sorrow, —
Why shines there for us such a light?.

All is traded, betrayed, and languished,
Death’s black wing has been flashing in flight,
All is gnawed at by the ravenous anguish…
So how is it that we bask in the light?

Everything is looted, spoiled, despoiled,
Death flickering his black wing,
Anguish, hunger – then why this
Lightness overlaying everything?

Everything’s plundered, betrayed, in ruin’s jaws,
The black wing of death flicks and gleams;
A hungry sick anguish at bowels and guts gnaws,
And yet here we are dreaming our dreams?

All is despoiled, abandoned, sold;
Death’s wing has swept the sky of color;
All’s eaten by a hungry dolor.
What is this light which we behold?

We notice that only renderings 2, 3 and 4 observe the abab stanza form, with number 2 indeed respecting the feminine rhyme. Comparisons between renderings 2 and 5 (i.e. between Maurice Bowra and Richard Wilbur) are particularly instructive, as both were masters of verse craft. Against expectations, Bowra's is the more persuasive, at least until the final stanza, which ends with the rather lame 'Though all longed for it many a year.' Wilbur rhymes his stanzas aBBa or abba throughout, and his last stanza is:

Closer it comes, and closer still,
To houses ruinous and blind:
Some marvelous thing still undivined.
Some fiat of the century’s will.

This is not quite what the Russian says: the houses are not 'blind', and the marvelous thing is not 'undivined', which is over-portentous, as is the last line. Meeting rhyme needs is the obvious culprit. 'To houses ruinous and blind:' has the right rhythm for the poem as a whole, but jars with the renderings of other lines, which are generally in iambs. Akhmatova also seems to me much more 'bolshie' and matter-of-fact: it's an important element in her work, which we need to convey if we are capturing that distinctive voice.

All is betrayed, plundered, brutally sold,
implacable black death is plain in sight,
in none is a gnawing hunger much controlled.
Why the birth, then, of such a light?

Days leave their delicate cherry scent,
under streets a rich-leafed forest grows,
new constellations in the firmament
and clear the heavens the summer knows.

And so the wonderful draws closer still
to dwellings fallen, filthy and ruinous,
unknown to any, an immemorial will,
what was long desired has come to us.

Completing the Translation of Akhmatova's Poem

That's not too good, of course. More importantly, the original Russian poem is in trimeters, which should at least find an echo in our rendering. We have to cut the extra syllable:

A sold-off cheap decade,
black death before our eyes,
to gnawing greed betrayed.
Why does this light arise?

The wondrous comes closer still
to huts filthy and ruinous:
so will the unknown fulfill
the millennia for us.

That's a rather free translation, with some of Russian words and extra syllables missing. A slightly more faithful rendering is the following, though less pleasing as verse: tertiary rhythms are not much used in serious English verse:

A plundered and lost decade.
Black Death unfurled in sight,
to hungry gripes betrayed.
Why are we shown such light?

What's wonderful comes closer still
in houses filthy and ruinous,
to the unknown, wholly unknown, will
come millennia desired by us.

2. Analysis of the poem "Everything is plundered, betrayed, sold" by Akhmatova. Short article in Russian.

3. Analysis of Akhmatova's poem "Everything is plundered, betrayed, sold..." Another school article in Russian.