All the Bright Contagions

Beautiful, mischievous and charming: Patrick Staunton is sufficient of a portrait artist to recognize trouble in the beautiful wife of his wealthy employer, and hardly needs the warning of mafia connections from an old Polish friend. 'Of course you will fall in love with me, I guarantee it', Natalie Stumpfl tells him at a Frankfurt nightclub, and remorselessly Staunton is drawn into her scandalous past even as he begins to understand the roots of his own tangled relationship with women. 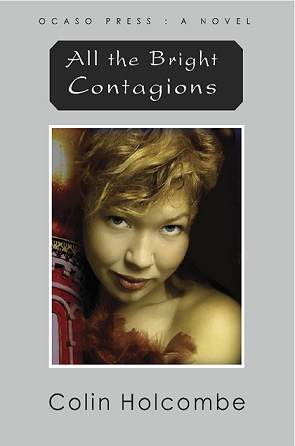 He closes his eyes to the murders of his father and girlfriend, and to the money-laundering activities of his employer, blindly following Natalie through Spain, the art-world of England and Russia. Will she leave the husband she despises, or does she despise all men, allowing only women to be fully intimate with her thoughts?

In stopping his headlong descent into crime, Staunton crashes the car in which they are travelling, and is arraigned for attempted murder. A celebrated court case brings out the shadows of Natalie's past as Staunton tries to secure the affections of a woman who is both his despair and continuing inspiration.

'Patrick, I am only alive when I am with you. Have you not noticed that? That I laugh and chatter and am happy. Does that not matter to you?'

'I'm not going to hurt Sompong. She's been through enough.'

'There are many types of love.'

I remembered my father, whose love for Hugh had destroyed his marriage. I thought of Georg and the betrayal of Renata, from which such a miserable existence followed. Of Rowena and Jerry, of Christine and her family. And of the violence that war does to our affections, or their slow suffocation under political repression.

'So what are we talking about?'

'It is you that have the independence now. You have the freedom to ask me.'

'After I've spoken to Sompong.'

Yes, talk to Natalie, about a life that hadn't yet begun, or might never begin, being undermined by Natalie's deceptions, by concern for Sompong, and by involvements with other women whose lives remained shadowy possibilities. But why take a step so against experience and common sense, and for prospects that were no doubt as illusory as anything else with Natalie? Because it completes a picture that was drawn at the beginning of this story, when I came to Botes in search of new opportunities? I think more because it gives me back that other kingdom, glimpsed in childhood, but now filled with the shapes that Natalie has renewed with all the bright contagions of her imperative needs and longings.

No doubt that lies far into the future. More than Georg realized, all our creations are shifting and unfathomable. We are only bodies, an assembly of muscle, organ and nerve fiber through which we give ourselves a home in a world infested with matter that is no more selfless than our own. Natalie didn't smile when I took her hand, nor the whole time we walked slowly to the car. 'If you want to', she said again, but I wasn't listening, only sensing we had already embarked on a bewilderment of our own making, on a ordinary day in London, those first castles still lifting and filling around us with the promises we shall one day have to call our lives.

You can download the free novel in pdf ebook form here.