Russian Poems: Annensky: Among the Worlds


Innokenty Annensky was an early Symbolist poet, publishing little in his lifetime but becoming an important influence on Akhmatova, Mandelshtam and others. {1-3} The anguish and torment (muka, toshka) of his physical life also run through his poetry, giving it a Baudelaire-like preoccupation with the fabric of existence, often with the same response in spleen and boredom. {2} 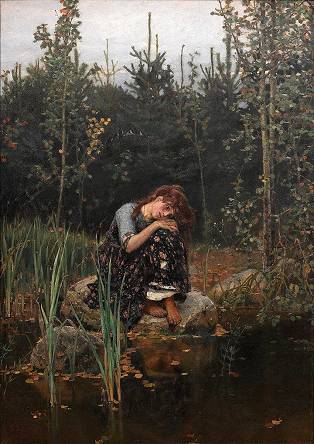 These elements are present in his best-known poem, ‘Among Worlds’, which has been widely translated, {4-8} but often sentimentalized into a regret for past love. It’s not quite that, {2} nor really comparable to Pushkin’s I Loved You. {8}

The Russian text is:

The poem is in pentameters, with alternate masculine and feminine rhymes:

The TTS Audio Recording indicates the assonance in the simple musicality:


Interpreting Annensky's 'Among the Worlds'

Our first need is to understand the poem. The word-for-word Yandex translation is:

Among the worlds, in the twinkling of the luminaries
Of one Star I repeat the name…
Not because I loved Her.,
It's because I languish with others.

And if me doubt it’s_hard,
I by her one search answer,
Not therefore that from it light,
And because, that with her not need light.

Anatoly Liberman’s literal translation of 'Among the Worlds' is:

Among the worlds, in the twinkling of the light Star, I repeat the name . . . Not because I loved it, but because I’m languishing with others.

And it’s hard for me, I’m the one looking for an answer, Not because it’s light, But because she does not need light.

And his verse translation:

Amid the worlds, ’mid luminaries’ gleam,
One Star I know whose name I keep repeating.
It’s not that of my love for Her I dream:
It’s that with others all is mirthless cheating.

And when oppressive doubt I have to fight,
Her answer only have I sought and heeded.
It’s not that She is emanating light:
It’s that with Her around no light is needed.

That’s a very fair guess at the meaning, which Symbolist poems don’t readily give up. Звездa (star) is a feminine noun, and ‘her’ appears in both stanzas, but who the woman was we don’t know. We might suppose Annensky is thinking of some star of the ballroom, but he was not a frequenter of high society but a retiring scholar, poet and translator. We need to look deeper into Annensky’s aims and approaches.

The ‘Pishi-Stihi’ site explains that the star was indeed a personification of hope and faith in eternal values to this most lonely of men, one to whom women remained an abstract ideal. {10} The uNotices site {11} says a good deal more. Annensky’s works combined the lyrical poetry of Pushkin and Tyutchev with psychological insight. The works were often mysterious, but the mystery in this poem does not lie in complexity, cipher and semantic vagueness, (a feature of French Symbolist poetry) but in a special psychological sharpness that is born from nothing but ‘verbal dust’. To be specially noted are:

1. The anaphora: Not because I loved her, / but because I'm languishing with others ... repeated with Not because of Her light, /And because with Her there is no need for light ...
2. The loneliness of the poet: I'm angry with others, doubt is heavy, I beg the answer, no need for light.
3 The capitalisation of Star, Her, and Her. She is important, irreplaceable.
4. The musicality of the piece.
5. The poem’s tight-knit nature: no word is superfluous.

In other worlds, their stars yet flickering,
there’s still a name my calling covers.
It's not that love for Her's continuing
but more I'm languishing among the others.

It's hard for me, who's lost in painful night,
yet she's the answer to this hesitation
from one who was perpetual light,
and in herself beyond all admiration.

This is unattractive for many reasons: rearrangement of the lines, expansion of sense and the heavy, unconvincing rhymes. It seems better to reverse the masculine and feminine rhymes in translation, and for three reasons. It's fairly intolerable to the English ear to round off a stanza with a weak, feminine line. Secondly, there are comparatively few rhyme words available in English for the particular line. And, thirdly, previous translations {4-8} haven't been successful in doing so: all add words to meet the rhyme needs, and these words damage the poem's simple fabric.

So, continuing with the swapped rhyme schemes, we can get a bit more musicality and avoid the more obvious rhymes with: (2)

Among the worlds of glittering luminaries,
there’s still a single star whose name I see.
and not because the light of loving carries,
but simply as all others weary me.

When painful tedium afflicts the living
she alone I sense to answer right:
it’s not because of any light she’s giving,
who was and is herself perpetual light.

But the first stanza has a name 'I see', and the second is a bit over-clever. We still haven’t got to the heart or essence of the poem, its Symbolist belief that matters can only be hinted at, and that ‘truth’ lies in the multiple associations of words, not in anything tangible that can be extracted and analyzed. As is often the case, it’s best to go back to the most literal translation, and try to construct something nebulously close to the simple words. (3)

In other worlds, among the luminaries,
there’s still a Star I name for everything,
it's not that any love for Her still tarries,
but more with others I am languishing.

It’s hard for me, who in this doubt is living,
but She’s the one who yet might answer right,
and not because of any light She’s giving,
but more because she does not need the light

The translation is fairly close to the original, replicating its features, though the lines are not particularly evocative or musical in English. We can of course combine versions (2) and (3), and move words around, to make a more attractive English poem, but not everyone would accept it as a proper translation: (4)

In other worlds, in momentary luminaries,
there's one I'd duplicate in everything,
and not because the light of loving carries,
but more that others leave me languishing.

It’s hard for me, who in this doubt is living,
to find the one who yet might answer right,
and not because of any light she’s giving,
but more because She is perpetual light.

There are other possibilities:

There's still one Star whose name I'd replicate / but more the others I would deprecate.

One star whose name I call continually / but simply as all others weary me.

A more correct but not very attractive version of the previous is: (5)

Among the worlds of flickering luminaries,
there's still one Star I'd name continually,
and not because of light that loving carries,
but simply since all others weary me.

It’s hard for me, who in this doubt is living,
but She’s the one who still might answer right.
It's not because of any light She’s giving,
but more because She does not need the light.

Alenushka by Viktor Vasnetsov. 1881. Tretyakov, Moscow. Viktor Mikhailovich Vasnetsov was a painter best known for historical and legendary scenes representing Russia's colouful past. Vasnetsov researched his subjects carefully, but added a certain poetry and carefully designed atmosphere to the historical accuracy. The result had a large impact on Russian landscape painting, which typically combines 'realism' and 'mysticism'.

Vasnetsov in fact started as a member of the the Wanderers, a progressive art movement that depicted local genre scenes, but moved on as the public turned against such a prosaic, social art. Additionally, he was also one of the first painters (as opposed to artisans) to create theatre backdrops, which in its turn encouraged the Russian Revival. {1}