Form and Spirit in Chinese Poems

Poems occupy a very high place in Chinese culture, and are cultivated more generally and more assiduously than in the west. Poetry was expected of educated men, both to know the classics and to turn out appropriate verses as occasion demanded. Poetry thus interpenetrated life far more than in western societies: it was not a special gift but an everyday social accomplishment. Lin Yutang indeed saw it as replacing religion, which in pre-Revolution China was more a cleansing of man’s soul, an awareness of the mystery and beauty of the universe, and a feeling of tenderness and compassion for one’s fellow-men and the humble creatures of life. Religion was not adherence to a faith so much as a continuing inspiration and living emotion. 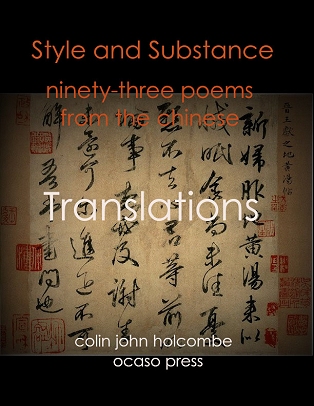 Poetry thus healed the wounded soul, and through its practice taught enjoyment in the simple things of life, a sane ideal for the Chinese civilisation. Sometimes it appealed to their romanticism and gave them a vicarious emotional uplift from the humdrum workaday world.

Sometimes it appealed to their feeling of sadness, resignation and restraint, thus cleansing the heart through an artistic reflection on sorrow. Often it taught them to listen with enjoyment to the sound of nature around them, to the sight of cottage smoke rising in the evening, and the smell of fields and woods after rain. Above all, it taught them a pantheistic union with nature, a sense of eternity in the fleeting lives of humankind.

Poetry was particularly attuned to the Chinese language, which thinks in emotional concrete imagery and excels in the painting of atmosphere. The language has a genius for contraction, suggestion, sublimation and concentration, and even its prose tends to be pithy and to the point. In art, said Bertrand Russell, the Chinese aim at being exquisite, and in life at being reasonable. Chinese poetry is refined. It is never long, and never very powerful. But it is eminently fitted for producing small gems of sentiment, and for painting with a few strokes a scenery alive with rhythmic beauty and informed with spiritual grace. Chinese scholarship emphasized the unity of knowledge, and in pre-Revolutionary days was unconcerned with the narrow specialisations of science. Poetry was essentially thought coloured with emotion, and the Chinese thought about everything with emotion. The Chinese language is crisp, and poetry needs that crispness. Poetry works by suggestion, and the Chinese language is full of contractions that mean more than what the words strictly say. Poetry should express ideas by concrete imagery, and the Chinese language revels in word-imagery. And, finally, the Chinese language, with its clear-cut tones and lack of final consonants, retains a sonorous singing quality, something without parallel in non-tonal, western languages.

We can overdo the visual aspects, but Chinese poetry does conjure specific images, indeed leaving exact interpretation open very often, so that the reader has to meet the poet halfway. Even in Chinese painting, and many poets were also superlative painters, scenes were impressionistic, so that in seeing the roof of a distant monastery lightly indicated, for example, the connoisseur would imagine the sound of temple bells. Of Wang Wei it was said that ‘there is poetry in his painting and painting in his poetry’, and Wang Wei indeed excels in descriptive landscapes that can be read imaginatively and visually.

From this impressionistic technique of suggestion arose what might be called symbolic thinking. The poet suggests ideas, not by concrete statements, but by evoking a mood which puts the reader in that particular train of thought. The thoughts are often indefinable, much as are the opening bars of an opera, and the connection between the outside scene and man’s inner thoughts is not logical but symbolic and emotional, in fact called ‘hsing’ in Chinese and employed well before Tang times. That pantheism is achieved by paralleling nature and human action in the poetry, and by investing natural objects with human actions, qualities and emotions through pointed metaphors, like ‘idle flowers’, ‘the sad wind’, the ‘the chaffing parrot’, etc. Old palaces may be called ‘heartless’ because they do not feel the sense of fallen grandeur or register the poet’s poignant regret.

Both aspects, a humanising of landscape (ching) and a reflection of  human emotion (ch‘ing) in landscape, are two poles about which Chinese poetry oscillates, and which allows it to be called carefree and unrestrained (hao fang) or restrained, tender and resigned (wan yüeh). Li Bai best exemplifies the first and Du Fu the second, but there are legions of poets who added their personal colour to all the shades in between.

Aesthetics recognizes several essential characteristics of artworks: beauty in form, faithfulness in representation, autonomy and emotive expression. All are prominently displayed by Chinese poetry, and so afford ways of both assessing our understanding of a Chinese poem and then crafting that understanding into an acceptable translation. Each characteristics must be present. A word-for-word transliteration might correspond to faithfulness in representation, but, if the other aspects were largely missing, which is often the case with the American free-verse model, our rendering would not be a translation in the full sense of the word but only a crib made for various personal or academic purposes. To see what's packed into an ostensibly simple Chinese poem, we might look at 'Leave Taking' by Li Bai (701-761):

Blue mountains, stagnant: north, the outer wall:
the river, winding eastward: an inward blaze of white.
Here, at this place, we make one final parting.
Like tumbleweed whirling ten thousand li, a fall
bewildering as the thoughts like clouds go scattered on.
So sets the sun on long acquaintance: light
and then darkness. We wave our farewells, horses starting
to neigh to each other, distantly, till each is gone.

This is one of Li Bai’s poems made famous by Ezra Pound’s translation, but closely studied by Chinese scholars, who note that by following the Lushi composition rule of harmony between the outside landscape and correspondent inside feelings and emotions Li Bai evokes the poetic mood with perfect imagery. In the first four lines, Li Bai describes the setting, and in the second four lines expresses correspondent feelings, which are 意 and 情. Moreover, he weaves each line correspondent to the next line for the aesthetics of balance: he arranges the blue, mountain, stagnant, north, and outer wall correspondent to white, river, moving, east, and inner wall, respectively, in the subsequent line.

Li uses a number, once in the third line, and then uses another number, one person in the fourth line. He also employs a Yin-symbol of a cloud in the fifth line, and then introduces a correspondent Yan-symbol of the sun in the sixth line. He also describes a movement of a waving hand in the seventh line, and then fills the empty space with a sound of hsiao. Finally, he builds up a flowing cadence by utilizing four tonal accents in each line and, simultaneously, makes the sound of the last letter in every even line to form an exact rhyme. Through perfect manoeuvring of the formal rules of Lushi verse, Li conveys an unusually deep range of feelings, including sorrow, loneliness, emptiness and mourning. The original is rhymed xaxa xbxb, and the translation abcad bcd.