Blok: I Foresee You


Alxander Blok's 'I Foresee You' gives translators a great deal of grief: in understanding the poem, devising an appropriate form, and finding acceptable rhymes. 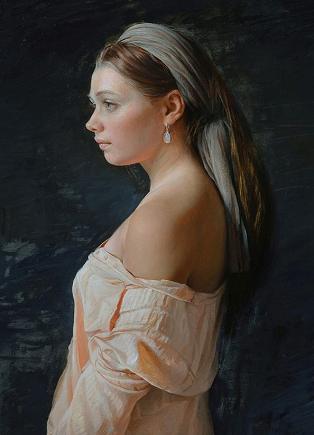 Contrary to first impressions, this is not a conventional religious poem, but a reflection on his forthcoming marriage to Liubov Mendeleeva, a childhood friend and daughter of the celebrated chemist. Blok saw her as the incarnation of divine love, embodying a purity that conjugal relations would only spoil.


Most writers learn to keep art distinct from life, but Blok never did. Nor, brought up in the most rarefied of university circles, did he acquire much everyday common sense, causing his wife to leave him. Liubov returned to this most sensitive and intelligent man, but was pregnant with someone else's child. To these strains in the marriage, Blok himself added his own flagrant affairs. Moreover, unreal as this conception of pure womanhood proved to be, Blok was only 21 when he wrote the piece, and the Symbolist concept was common in Blok's circle. In short, we have to take the poem as it is, and do our best for it in the translation.


Analysis of I Foresee You

The poem is in slightly irregular pentameters and hexameters, rhymed as follows, where the feminine rhyme is shown in upper case:

Six renderings are given on Ruverses. I give the first two stanzas of each:

The skyline is on fire, and it's extremely clear.
I wait for you in silence with pangs of love and rue.

Foreseeing you, as years are passing by —
Your image is unchanged in my perception.

I cannot bear the lucid, blazing sky,
And so I wait — in love and in dejection.

The whole horizon is aflame — impossibly sharp,
And mute, I wait, — with longing and with love.

I have forebodings of Thee. Time is going,—
I fear for all that in Thy face I see.

The sky’s aflame, intolerably glowing;
Silent, I wait in love and agony.

The distance is in flame — and clear one as glass,
I, silent, wait — with sadness, love and pain.

All the horizon on fire — impossibly bright,
And mutely I wait — in love and longing.


One: Getting at the Meaning

The poem was written in 1901, and looks forward to marriage with his childhood friend (1903) and expected dedication of his 'Verses About a Beautiful Lady' to her (1904). Blok was an adherent of Vladimir Sergeyevich Solovyov's philosophy about the Eternal Feminine, where the "Beautiful Lady" is a symbol of beauty and goodness. In his cycle of poems, she is called "Her" the Daughter of Light, the Mysterious Maiden, Eternal Love, Bright, Quiet, Mistress of the Universe...all of which Blok thought he had found in Liubov Dmitrievna Mendeleeva, whom he had known since childhood, but with whom he became especially close in 1898. Unfortunately, this worship of female beauty excluded conjugal relations, and Liubov Dmitrievna, increasingly exasperated with her famous husband, also took up with the poet Andrey Bely, and then left Blok altogether. Blok seem not to have anticipated these problems, but seems only concerned that his future wife may change her idealized form before marriage and dedication of his life's work to her.

The Young Symbolists, to which Blok belonged, as well as to the Decadents, adopted Nietzsche's idea of a superman, but, unlike the superman, did not set themselves up as an enemy of the common crowd, but genuinely wanted to save humanity and the world. They welcomed the 1905 demonstrations, therefore, but rapidly became disenchanted with the 1917 Revolution and its unavoidable reality. Taking the poem’s two-line stanzas in turn:

Introduction: sets the scene: the poet worries that what he sees in his beloved's face may not last.

The poet looks to the future, which he sees as bright and joyful. Fire is a symbol of victory, the triumph of light over darkness, a symbol of purification, as well as a symbol of household wealth, which explains the author's expectation of a quick betrothal to his beloved. Silence is a sign of agreement, of humbly awaiting events.

Again his worries come to the fore, and his beloved may not share the poet's worldview.

Indeed the poet is waking to a bold suspicion that his wife will indeed change from what it used to be.

The suspicion is now a mistake and does seriously threaten their marriage. The poet will fall from his lofty ideals and experience great sorrow.

The sky (his prospects) are still bright, however, and the poet will continue to put his wife on a pedestal. Her radiance is near, though the doubts return.

We should note the cyclical nature of the piece, the emphatic epithets, the rhetorical exclamation and the tight coherence achieved by alliteration, etc.

The poem is written in mixtures of pentameters and hexameters, in places a little irregular, though not strictly Dol'nik. The form is an essential feature of the poem, and needs to be retained in the translation.

Rhyme has caused some translators a good deal of trouble. As always, in poetry and translation, rhyme has to appear natural, indeed inevitable, and most British poets have used well-tried conventional rhymes that do not draw attention to themselves.

So what do we write, pentameters or hexameters? I suggest the former. Hexameters may be natural in Russian but they are exceptionally difficult to handle in English, tending to be rather stiff and heavy, the last things we want with Symbolist poetry.

Moreover, as I've often remarked, it's generally wiser to translate for sense rather than transcribe individual words. If we first write simple pentameters with age-old rhymes we will avoid the contrivances that plague renderings 1, 2 and 5 (plus 3 and 6, which don't rhyme at all) and not write the haphazard 'free verse' of the wrong line length in rendering 6. I suggest we do the translation in two stages. First as regular pentameters:

Of You I have forebodings: time passes on,
I fear whatever in Your face appears.

The whole horizon flames: Your face draws near
though You may change the way You look to me.

Audaciously may all be changed, I fear,
and your usual features then cease to be.

Then, sorrowing, how low I'll fall,
and how fatal will that dreaming have come to be

yet sky's aflame and radiance is all
though You may change the way You look to me.

Line 4 is contentious. И молча жду, — тоскуя и любя literally translates as 'and silently I wait, yearning and loving', but most translators have sharpened the longing. Bowra has 'Silent, I wait in love and agony.'

Then, because the original has 5, 5-6 and 6 stresses to the line, because we need variety in phrasing to express matters more emphatically, and because we need to bring the rendering closer to the Russian, we can write:

Of You I have forebodings, but time moves on,
I fear whatever in Your face appears.

Clear, unbearably, has that horizon shone,
I wait in silent longing, love and tears.

The whole horizon flames. Your face draws near
though You may change the way You look to me.

Audaciously you raise the very thing I fear,
when Your appearances will cease to be.

Oh, then and sorrowing, how low I'll fall,
and terrible the dreaming come to be,

yet with horizon blazing will the fire enthrall,
though You may change the way You look to me.