Symbolism in literature was a complex movement that deliberately extended the evocative power of words to express the feelings, sensations and states of mind that lie beyond everyday awareness. The open-ended symbols created by Charles Baudelaire (1821-67) brought the invisible into being through the visible, and linked the invisible through other sensory perceptions, notably smell and sound. Stéphane Mallarmé (1842-98), the high priest of the French movement, theorized that symbols were of two types. One was created by the projection of inner feelings onto the world outside. The other existed as nascent words that slowly permeated the consciousness and expressed a state of mind initially unknown to their originator. {4-5} 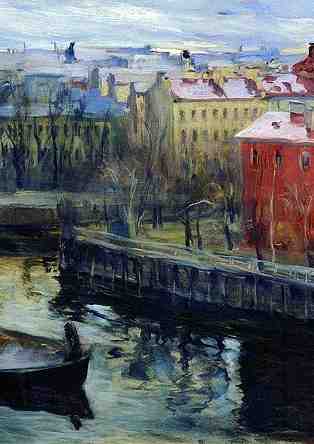 Like their French originators, the Russian Symbolists also wrote verse as something aspiring to music, but broke into two factions. Some, like Bryusov, saw Symbolism as a purely literary movement. Others, notably Vyacheslav Ivanov, Bely and Blok, believed Symbolism was a mystical religion to which poets served as high priests.

Blok was the greatest of the Symbolists, using metaphorical language of marked originality to convey spiritual and religious experiences, and with the images possessed of multiple meanings to express the link between the visible and invisible worlds. {4}

The notion is not difficult to understand. Words do not get their meaning from definitions or dictionaries but from their social purposes, Wittgenstein was to argue, from the practical context in which they are employed. Many nineteenth century also thinkers rejected the Enlightenment's notion of progress and abstract categories, and spoke instead of a Volk, a people — something that was not rationally grounded or justified, but grew from feelings and traditions previously overlooked. Social life was indeed analogous to organic growth, and aspects of social life were related to each other like functions of a living body. Herder developed this notion, relating earth to the cosmos, man to earth, man as a social and historical being. History was the growth of a single, marvellous tree whose branches were the cultures of mankind.  If all reality is fundamentally one, and the Divine is present in all its manifestations, then what occurs in history is Revelation. Individual conscience may be fallible, but it is the role of man's moral sense to penetrate deeper into the nature of all that exists. The sense of the dark and hidden, the feeling of dependence and awe, and a worshipful acceptance of the fullness of being, are the attitudes which put religious man in touch with the Divine. The Slavophils in Russia of the 1830s and 1840s also believed in the primacy of the moral and religious law, the ancestral tradition and the spontaneous sense of the right and just over the written laws and regulations of the state. {5}

Words were natural intermediaries in this process, and could yield their shadowy and larger meanings  if used appropriately. Blok saw art as an element in cultural history, and the latter also had a religious dimension — which in Blok's case was a mystical love for Divine Wisdom. He began to interweave love, art and dissident views into his duties as the high priest of Symbolism, engaging in affairs — which, when reciprocated by his wife, ended in disillusionment and wrecked his first marriage. The Beautiful Lady of his early poems gave way to correspondences taken from contemporary Russia, often with urban, everyday and dispiriting imagery, for which he had an innate sense of the appropriate. Blok first welcomed the Revolution but grew increasingly depressed and finally silent over its reality. The stern necessities of a communist regime fighting for its life with harsh decrees became very different from the artistic and highly-cultured society in which he was reared, and was worlds apart from the social realism it advocated. To the new democratic purposes of the common man, Symbolism had become a reactionary bourgeois art form. {6}

The verse is close to iambic tetrameters, rhymed aBaB, but the occasional extra syllable means it's probably better seen as dol'nik verse:

A TTS Audio Recording of the opening stanzas:

Symbolism is the most difficult style to translate because the meanings that in one language produce a musical and evocative phrase will probably not do so in another, i.e. literal translation will generally lose the poetry. The loss is particularly the case with second stanza we could render as:

The night far out above the street
is hoisted to a dead man’s guise,
a poor sick man where poison, sweet
and perilous, still fills the eyes.

But that, I think, personifies the night too much, where the literal meaning is:

We don't really know if the poor sick man is the poet or just the night sky, and it seems better to keep that ambivalence:

Answering to a dead man's gaze,
the night extends above the street:
and dull the poor, sick eyes that blaze
with poison that is sharp and sweet.

We also have the Dol'nik question, but here it seems wise to let the verse have an idiomatic vitality, rather than introduce extra syllables. The poem is then:

Let the moon shine out and bring
a happiness to life together.
In my soul of love the spring
will not undo the stormy weather

Answering to a dead man's gaze,
the night is stretched above the street:
and dull the poor, sick eyes that blaze
with poison that is sharp and sweet.

Though vain is passion, in the frost
of crowds and early dawning mists
I wander as a soul half lost
but find one cherished thought persists.

Let the moon shine out and bring
a happiness to life together.
In my soul of love the spring
will not undo the stormy weather

Osip Emmanuilovich Braz (1873-1936)  had a colourful life, much of it spent outside Russia. He studied painting in Odessa, and then in Munich (1891-1893), where he attended the Academy of Fine Arts. After Germany he went to Paris and the Netherlands, studying and collecting paintings, thence returning to Russia and studying in the workshop of Ilya Repin (1895-6). For the next thirty years, Braz turned out portraits of fellow artists, including the poets Leonid Pasternak and Sergey Ivanov, plus prominent figures of Russian culture.  There were also landscapes of France, the Crimea, and Finland, and from 1900 to 1905 he gave lessons in his studio on the Moyka River. {2}