A Book of Places Collection of Poems

The hundred odd poems take the reader through various settings in London and southern England to Iran and north Africa, to south-east Asia and Oceania, back to Europe and thence to Latin America. 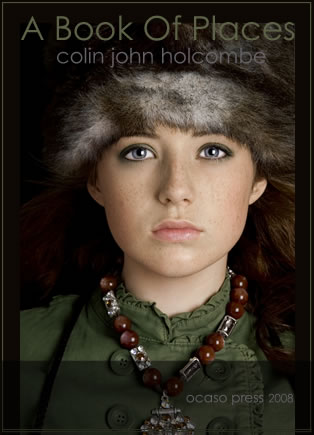 There are poems set in academia and military establishments, in high society and among ordinary folk, in cafés, nightclubs, churches, hospitals on the streets of tropical cities, on desert roads and the lush jungles of Indonesia. Now included are a few poems originally appearing in The Nutcracker, Small Talk, Julia Caesar, Aries Rising and Planet Earth collections.

Anyone who enjoys the romance of travel will like these poems, which exhibit an unusually wide range of style, from free verse to tightly rhymed forms, all characterize by scrupulous craftsmanship and a keen ear for the possibilities of English meter.

As for the ineffable, there were the clouds only
that on some days hung in high-wrought splendour, casting
an aspect of sadness on the scenes beneath.
Yet here and everywhere was England: ordered, rollered
into farms and parklands, shelving to the Thames
which, upstream silver dimpling into water-meadows
or threading into inlets, here on the village settles
an air of foreign occupation. It lines up boatyards
and small bridges, reflects the waterside hotels;
for visitors it shimmers, backdrops picnic lawns,
jostles the odd pleasure craft, plunges, legend-pooled,
to runs of tench and perch.
All this is thematic,
and was. Stanley Spencer, painter and iconoclast,
traced each day with eye and brush the solemn glory
of his God. He painted in vast canvases
the Thames rolled back, from its cramping gravels the dead
awakened, tumbled out in dawn-pale multitudes
of children, postmen, vicar, schoolmistresses, the baker. . .
The vision, roundly drawn, composed as of the weather
with its mildness and forgetfulness, the public
accepted in large commission. More followed. He married,
was successful. Working on altarpieces, however,
he pierced the body to its ribald cloak of flesh,
painted his own in every jubilant particular,
then a friend's. All still, he saw, the progeny
of God.
The public disagreed, bought nothing. By turns
he lost his wife, his friend, the cottage and commissions.
He painted on. Became obsessive: abroad a celebrity,
at home a bespectacled recluse. Eventually God left him.
In the iron-stained gravels one stripped December day
they buried him, a pauper with a civic pension.
Years pass. At the request of visitors the council
open a museum, which vies now with the Sunday funfair.
And distant from the village, far from his demise,
unruffled and unconcerned by it, the huge clouds rise.