The play opens in 41 BC, when Antony and Octavian share the rulership of the Roman world with the third triumvir, the inoffensive Lepidus. Antony is tasked with bringing order to the eastern provinces, and creating some defence against marauding Parthian horsemen who regularly invade Syria. Octavian is in Rome, consolidating his hold on Italian politics and finding land and money to pay his troops. Octavian is Julius Caesar's adopted son, but much Antony's junior partner in years and military experience. His current problem is Sextus Pompey, Pompey the Great's son, who has turned pirate and withheld the grain supplies from Egypt so necessary to Rome's survival. Peace between the parties is made in Brundisium (40 BC), and the pact strengthened by Anthony agreeing to marry Octavia, Octavian's long-suffering sister and another pawn in his political manoeuvring. 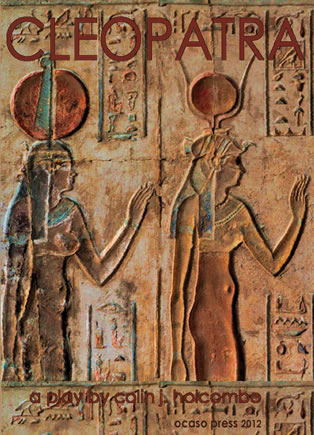 Cleopatra is in Egypt, to which she fled when Julia Caesar was assassinated in 45 BC. She has taken no new lover, but rules her country competently, knowing there are always new claimants to the throne, especially her half-sister Arsenoë, then residing in Greece. Cleopatra VII is a Ptolemy, the Macedonian rulers of the last and richest Hellenic kingdom to remain outside Rome's clutches. Cleopatra has to balance the unruly passions of her polyglot subjects, who would welcome a recovery of the former territories of Judea and Syria, with the iron reality of the times, the aggressive expansion of the Roman state.

Cleopatra and Antony's passion was real, but it was political considerations that brought them together and forged their common destiny. Antony was impetuous by nature, and saw in the 36 BC Parthian adventure a way of becoming the undisputed leader of the Rome world, outdistancing the claims of Octavian, a consummate politician but poor soldier. The adventure failed. Antony could not take the Persian city of Phraaspa, lost his baggage train and was forced to retreat, his army being further reduced by Parthian hostilities, thirst, hunger and disease. Octavian launched a propaganda war against Anthony, who was obliged to return hostilities by transporting a combined Roman and Egyptian army to Greece, protecting the coast with a string of forts but keeping his fleet safe from attack in the Ambracian Gulf, where the village of Actium marked its entry to the Ionian Sea. Agrippa, Octavian's talented admiral, who had outwitted Sextus Pompey, first seized Anthony's Greek forts and then blockaded Anthony's fleet and army at Actium. The armies saw only minor engagements, but the skirmishes did not favour Antony, who suffered continual desertions as the hot summer wore on. He was forced to break the blockade, securing the escape of Cleopatra and a few of his own galleys but leaving the main part of the fleet to be captured or surrender. His army under Canidius at Actium was instructed to march to Macedonia, but yielded to inducements from Octavian, who then had Canidius executed.

The end came a year later, in 30 BC, when the combined forces of Octavian converged on Alexandria. After several one-sided engagements, Anthony committed suicide to avoid further bloodshed, as did Cleopatra a few days later. By tradition her death was by snakebite, but poison seems more likely. The son of Caesar by Cleopatra (Caesarion) and Antony by Fulvia (Antyllus) were quietly murdered, but Cleopatra's daughter with Antony (Selene) survived to make a marriage with the learned Juba II of Mauretania, and the royal couple also took in Selene's brothers (Alexander Helios and Ptolemy Philadelphus), who then disappear from history. The play's ending looks on to the vision of Anthony and Cleopatra, which was to create an eastern Roman state, an aim achieved with the foundation of Constantinople in AD 330 and the Byzantine Empire, which lasted to AD 1453.

Act One: Scene I

What has it come to, that this braggart vies
with once-high Hannibal to block supplies?
The Senate orders but it's Sextus rules
the crossways of our scattered world, and schools
a simpering prudence in us lest we rue
more depredations when our grain fall due.
Where is the old command that arms had won,
where we but wished it and the thing were done?

We stand upon a troubled world that finds
10. Olympus even in its several minds.

So grows survival in the ravening jaws
of Roman justice bent on private cause.

Choose Antony beneath an eastern sky
or have our own good consul bleed us dry.
Soon comes that worst of things, a civil war.

It's Antony who has the conscience more,
and with his wildness and his drinking bouts
more given to openness and inner doubts.

Except that roisterer is never strong
20. enough to choose a course or hold it long.
His path's quixotic and can only fare
as some rich costume that an actor wear
for one scene only. Now a king, and then
most ruffianly of blood-besplattered men.

Such is the heritage of dragon teeth,
those ruinous conflicts Caesar sowed beneath
the ordered running of the state. Our wives
are sullied, properties, our very lives
are put at hazard by ambitious men
30. that we shall serve, and have to, and again,
for all Ammonius steer a quiet course.

My views are heard, perhaps, but have no force.
No threat to anyone, nor is my life
a pledge to party or a loving wife.
My wants are simple, and my one small room
is apt as fortress or eventual tomb.
Sweet is the morning's sunlight, bliss that falls
the same on hovels and on proud men's halls,
but all we cherish, this bright world of mind,
40. is winnowed far from us, and hard to find.