Climbing Through: A Poem on Mountaineering

Life changes for Davie when he stalls on a challenging ascent and is written off as a competent climber. True, he marries his girlfriend Deborah and they have a child together, with another expected soon, but the sense of failure eats into his character, turning the natural leader into a silent introvert continually brooding on what went wrong. 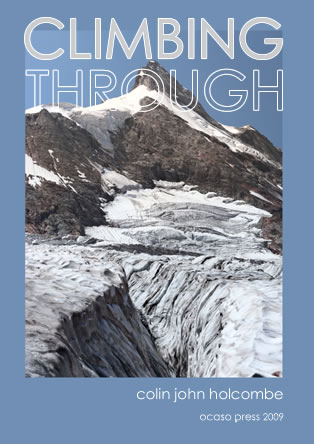 When his old climbing partner is killed on attempting a solo climb on the same mountain, Davie resolves to undertake a solo climb himself, against good mountaineering practice and Deborah's pleadings to put the family first. Davie succeeds in the climb, but Deborah never forgives him for risking their future happiness. The two gradually drift apart, and Davie comes to see why climbing is so important to him, more than anything else in the world.

In this extended poem of fifty stanzas, the mountain becomes a metaphor for inward determination, exemplifying that need so many sportsmen feel for an integration of body and mind, where outward challenges serve to discipline the body and make it fully responsive to its psychological needs.

Life's not delusional, but sometimes finds
a curious lodgement in its different minds,
and did on the occasion of that note,
the 'summit conquered' message left the day
that Alan fell in coming back. He wrote
just name and date, of course, and didn't say
'If I have climbed it solo, so can you'
but hardly had to when my name was scrawled
across the note in capitals. I took
the message calmly though his death recalled
a small, neat entry in our climbing book.
I nodded, saw the party to the door,
and Deborah shut the past out as before.

The long months passed. I thought on it, the fall
they'd got no warning on, no mobile call
that he was missing even. 'Broke the rules
right properly did Alan, wasn't found
for days: another of those hare-brained fools
who can't accept how difficult is ground
up there. Or seems to some of us.' I thought
of Alan Shawcross as I'd known him then,
my earliest climbing partner, awkward cuss
who kept repeating: 'Dave, you'll climb again,
you know you will: you're one of us.'
But he had gone, as though that mountain brought
more wayward danger on us than it ought.

We grow on past such idiocies, I told
myself: the rain, the early starts, the cold.
Our life was easier then, not on the go
as now from dawn to dusk, though happy to
with one more toddler on the way to show
whatever happened we were still that two-
some they remembered, that close partnership
that rose to challenges they'd have to face.
Perhaps the house was shabby, and could do
with paint and furniture, a toy-strewn place
for Sam and his new playmate — yes, that's true,
but still it offered us, within our reach,
a happiness to share in, each with each.

We both were PE teachers, different schools,
with mine more occupied with grades and rules
but in the both of them you felt the pledge
of health in bodies bred from healthy minds.
That was the least of it, their heritage,
what any course of exercising finds:
that subtle intercourse of the lungs with breath,
and suppleness of skin with borne-out sense
of balance in the middle way which Greeks
admired and trained for in their track events —
which every pupil learns, attests to, speaks
the truth of, hopefully, though couldn't know
what part is truth and what more outward show.

I doubt events had undermined my strength
one jot in what I did, or that full length
I'd go to get their talents used. Most boys
who treat the workouts as another class
can have no notion how the body joys
in constant drill and exercise, which pass
insensibly into a self-regarding
need to make the most of discipline
in track events, gymnastics: burst and rest.
It's not the conscious mind or state it's in
that tells the whole ensemble what is best,
but both together, interlinked by trust
to live and move in tandem, as we must.