I hope these poems will speak for themselves, but, if they prove baffling, it may help to know that they attempt to do four things:

1. Describe some aspect of coin that evokes a flavour of the times they represent.

2. Say a little more than is needed for simple description, i.e. build on the larger responsibilities inherent in the words, creating a penumbral echo of meaning that further develops the historical themes noted above. 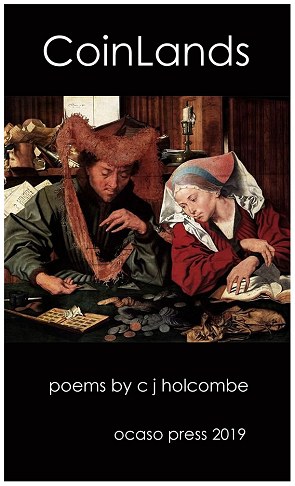 3. Draw on the approach of the earlier Geoffrey Hill, with its broken rhythms and white-space patterning. Unlike his work, however, the poems both start and end with material circumstances, i.e. do not indulge in Hill’s abstruse speculations which usually enclose lacunae of meanings, either because Hill has not rounded the circle of his thoughts or (as Postmodernist theory asserts) because meaning is inherently fragmentary and incomplete.

These poems are not Postmodernist, but make their meaning through the verse structures that draw the sense together.

4. Explore the possibilities of the rhymed hexameter, a challenging but rewarding medium in English.

Bar the first and last poems, which provide a background to my early coin-collecting days, each piece is a tightly compressed meditation on the coin illustrated. Much could be written on every exhibit, many thousands of words, no doubt, but the text accompanying the coin should provide entry points, and anything obscure can be checked on Wikipedia and the like.

Stress verse, six syllables to the line, is used throughout, and the rhyme scheme follows that of the Shakespearen sonnet. Because the rhythms are often irregular and broken, I have made the end rhymes conspicuously heavy, giving the poems a solidity they would not otherwise have.

The flare and morbid sadness of the streets at night,
existences as thinly meshed as pocket-knives:
from drab, suburban Britain in its war-time blight
we looked to vast encompassings in other lives.

For us it was a ringing of pocket money into fragrant lands
of books and thick-bound catalogues with their spectral friends:
with ghosts on long-scuffed pavements, where each journey stands
upon departures into manhood’s lettered ends.

What rich perplexities were in their ornate flans,
in rulers’ names and dynasties unknown to us ―
the cities, minting places and their tribal clans
in lives so fleeting otherwise, and silent thus.

Between the head and rim was not an empty space
but radiant benediction from a distant place.

Worse in villages, but now, in their thin-walled towns
awaiting the hooves of conquest, a rallying call
rises on the evening as each prospect drowns
in silk- and blood-dressed warriors, wading tall.

Earth that was niggardly is glutted: the small spade coins
observe no splendid obituaries and are not read.
Here life is arbitrary, fragmented and nothing joins
the living to their forebears but the short-stemmed dead.

All in time dwindle to an interrupted line,
residues of corruptible dynasties that are almost lost
into the seal-script characters that would define
themselves as ghosts of empires and of endless cost.

Ignorance and absence in these slender blades:
blusters of arrows in intermittent fusillades.

Reigning ever beautiful in this rich land
of terraces and river-watered slopes of simmering heat
between the nomadic peoples ever close to hand
and the murmuring southward fields of fabled, thick-sown wheat.

Demetrios: the headdress of the elephant
proclaims him forever triumphant, though the reverse flan
set out the legends sideways, as though words were scant
acknowledgement that here was one, solitary man.

Who passed as others pass across this continent
of hot impermanence, of sects and strange belief.
Perplexing the fabled blaze as empires came and went,
yet always incantatory, intense and brief.

Here too the Zeus-annointed came in wind-snatched song:
an Alexander, the god-like, who did not live long.

Those wanting the numismatic background will find the following useful:

Cribb, J., Cook, B. and Carradice, I. Coin Atlas: The World of Coinage from its Origins to the Present Day. MacDonald Illustrated / Spink, 1990. A scholarly index grouped by country.

Plant, R. Arabic Coins and How to Read them. Spink, 2000. A simple but handy introduction.

Davies, G. A History of Money from Ancient Times to the Present Day. Univ. Wales Press, 1996. Much detail on western banking and coinage matters.