Eugène Fromentin was that most unusual of creatures: a successful genre painter exhibiting regularly at the Salon, and a prose stylist of the first order. He wrote only four books: Un Été dans le Sahara (1857), Une Année dans le Sahel (1859), Dominique (1863) and Les Maîtres d'Autrefois (1876) but all were accomplished, Dominique being warmly praised by the likes of Flaubert, George Sands, Gautier and Sainte-Beuve. 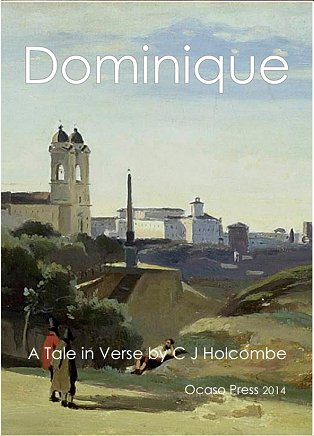 Yet the novel seems not wholly successful. Its power of evoking the moods of nature, its depiction of youth's painful infatuations and its exquisite sensibility of style have never been seriously questioned, but over the plot there hangs a large uncertainty. Why don't Dominique and Madeleine, having exhausted themselves in their long struggle with propriety, finally consummate their love?


Is it cowardice, prudence, high-mindedness or a penance for Fromentin's own transgressions in a youthful affair on which the novel was loosely based? So the novel remains, the equal of Turgenev in its sensitive depiction of the human heart in love, its follies, raptures and despairs. In the verse translation that recreates the novel I have simply supposed that Dominique represents the artist's vocation, of creating imaginary worlds but living largely elsewhere, in what passes for our mundane reality. It will help to read the verse tale with that view in mind.

There's Monsieur Dominique, the doctor said,
adopting much the strategy as ours.
I looked, and by a puff of smoke was led
to see his neighbour two fields off. For hours
we closed or circled round, and each could hear
the other calling dogs to fetch or heel,
but every time our varying paths drew near
the surly fates held off, refused to deal.
My dogs then raised a bird that flew his way.
Your shot! I called out, lest, on waiting, both
would miss. He fired, and after some delay
emerged from vines and tangled undergrowth.
Forgive my deputizing, which I hope is cause
to make this fine cock partridge rightly yours.

I saw a well-made man, suntanned and tall,
of forty odd, but with a youthful air.
Some pleasantries were said, and I recall
my thinking something in the manner there
did not accord with rustic, southern earth
of vineyards, farms and sun-warmed heath,
for all that gun-crest spoke of local birth.
For like our consciousness they stayed beneath
the hurtful memories that shade the past.
He's not the simple countryman he poses
as, the doctor offered me at last,
and that the least enquiry soon discloses.
But what he sometime was I doubt he'll say,
for lives reduced are apt to stay that way.

I paid my duty call that self-same night,
and found him much at home, by happy chance
beneath the splendour of the moon's full light
that blessed his vineyard's end-of-harvest dance.
We spoke of shooting, vintage, crops. The biniou wailed
and interrupted any words except
that Paris with a wistful note prevailed
like childhood promises we haven't kept.
Later came an invitation, where I met
the happy household of Les Trembles. She,
Madame de Bray was charming, would have let
the conversation amble naturally
but Dominique, while still our well-bred host,
remained apart from that, a smiling ghost.