A Storm in the Evening Sky by Afanasy Fet

'A Storm in the Evening Sky' is one of the simplest poems, but illustrates Afanasy Fet's (1820-82) approach: a minimum of verbs and clauses, the piling up of nouns and adjectives and short, simple sentences without conjunctions (parataxis) {1} 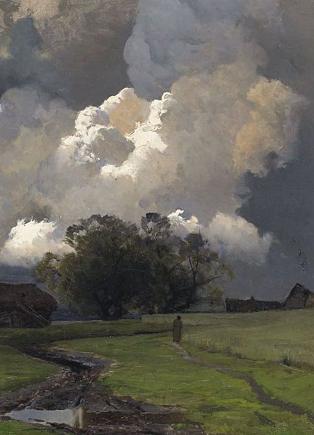 A 'Storm' in the Evening Sky' is a well-known little piece, and shows the extent to which Fet would upset the poetic expectations of his day to get certain effects. We analyze the poem below, but will later have to consider the bulk of Fet's work, which can pass from the simplistic to the over-simple.


The TTS (text to speech) recording is:

The poem is in dactylic trimeter, rhymed as follows:

Ruverses have two translation of this this poem, one by Don Mager, and an older version by O. Elton. I give the first stanza of each translation in turn:

Storms in the evening skies,
The din of a sea gone mad
Storms on the sea and broodings,
Heavy the pain as I brood —

Storm in the skies in the evening.
Noise of the wrath of the sea;
Storm on the sea, and the thronging
Thoughts that are torture to me;

The literal translation is:

Storm in the evening sky

Storm in the evening sky
Seas of angry noise —
Storm on the sea and thoughts,
A lot of agonizing thoughts —

Storm on the sea and thoughts,
Chorus of growing thoughts —
Black cloud after cloud,
Seas of angry noise.

Not only words, but whole lines are repeated. The end-rhymes are insistent, not to say heavy, and there are also starting rhymes: Бу́ря threes times and Моря twice. Even the words that do not rhyme are echoes of others: вече́рнем with Чёрная and возраста́ющих. Of the seven nouns in the poem, four share the stressed 'u', and two the stressed 'o'. All the nouns, moreover, are either monosyllables or bisyllables with the stress on the first syllable. {2}

What was the purpose of such word play? Probably an increasing personification, as the poem moves from observation (lines 1 and 2) to effect on the observer (lines 3 and 4) that intensify through lines 6 to 8. We should also note dumy (ду́мы), associated with man (the 'thinking reed in Pascal's famous formulation), which is relentlessly hammered home in dum (дум) and its rhymes. Sound, syntax and meaning are so closely interwoven that we cannot entirely distinguish human form non-human, the poet's troubled thoughts from the deafening storm as the poem proceeds. {2}

The poem, written in 1842, was considerably ahead of its time. Just as the Barbizan school gradually promoted landscape painting into being the main subject of interest, so Fet made sense impressions a theme in themselves — hence his importance to writers like Turgenev, Chekhov and Bunin. Not for nothing did Bunin entitle one of his more memorable stories 'A Cold Autumn', quoting from Fet's 1854 poem Какая холодная осень!..

Renderings are easily written. A somewhat literal version is:

Storm in the evening sky
Noise of the angry sea —
Storm on the sea and thoughts,
Unsettling the thoughts in me —

Storm on the sea and thoughts,
Chorus of growing unease —
Black cloud after cloud,
Incensed are the angry seas.

Storm in the sky at evening,
Noise of the angry sea —
Storm on the sea and reasoning,
Painful the uncertainty —

Storm on the sea and reasoning,
Chorus of growing unease —
Cloud after cloud is deepening,
Incensed are the angry seas.

Or we can write something that more echoes Fet's approach:

Storm in the evening sky

A storm in the evening sky,
lashing of angry seas —
a storm on the sea and thoughts,
upending of certainties —

A storm on the sea and thoughts,
thrashing into more unease —
growing dark into darkened cloud:
sea's gathered cacophonies.

These little poems and their translation are harmless diversions. But what are we to make of the bulk of Fet's work? One of Fet's better known poems has been translated as the following by Richard Gustafson: {4}

There is a sad birch
Near my window,
And by the frost's fancy
It is attired.

The ends of the branches hang
Like bunches of grape, -
And its whole funeral attire
Is joyful to my glance.

I love to watch
The play of dawn upon it,
And it will be a pity, if the birds
Shake off the beauty of the branches.

This is not to question Dr Gustafson's translation in a study that may still be the best we have in English on Fet's poetry, but the poem is coming perilously close to kindergarten verse. Even the nine translations that appear in C.M. Bowra's A Book of Russian Verse {5} — and all from translators with a mastery of traditional verse that is largely lost today — are only pleasant trifles. Why nothing more adventurous? Fet was hardly a timid soul, but, as Mirsky remarks, 'In his student years he was, like all his contemporaries, expansive and naively open to generous and ideal feelings, but later on he disciplined himself into a guarded reserve that had all the appearance (and a good deal of the substance) of callousness.' One can at least sympathize with critics who expected more at a time when Russia was experiencing the growing social unrest that would overthrow the government in the 1917 Revolution.