The Odes of Horace —  a free pdf ebook of the poems with facing Latin text, notes and references — returns to the aims of earlier translations, which was to reproduce in English some of the intricately musical expression that Horace brought into Latin. 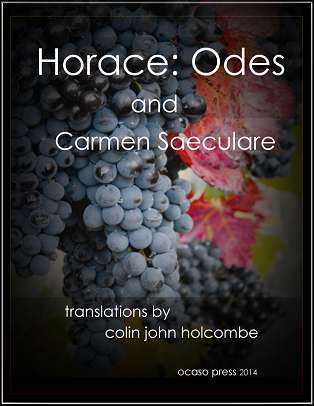 Quintus Horatius Flaccus was born in 65 BC to a freedman in Venusia, southern Italy, who gave his son the best education his limited means could aspire to, sending him to Rome at the age of twelve and then to Athens. When twenty-one, without a day's military training, the young man enlisted as an officer in the Republican army, apparently serving without disgrace until the defeat at Philippi. With the general amnesty that followed, Horace returned to Rome and took a modest post in the Treasury, which he retained for seven years.

In the spring of 38 BC Horace was introduced by Virgil to Maecenas, and was nine months later admitted into his celebrated circle of writers. Around 35 BC he collected his compositions in a first book of Satires, which exhibits the urbanity, quiet humour and common sense that distinguish his best work. A second book of Satires was just as accomplished, employing lively hexameters for easy dialogue with himself and his own affairs.

The following Epodes (c. 29 BC), criticising the lack of civic duty among contemporaries, was marred by flatness and artistic vulgarity, however, perhaps in an effort to flatter Maecenas, who had given him a farm in the Sabine Hills some fourteen miles from Rome. It was a substantial affair, with eight slaves and five tenant properties attached, and the financial independence allowed Horace to work in his own manner. Seven years later, in 23 BC, when he was forty-two, the poet collected the eighty-eight pieces in three books or scrolls of what he will always be remembered for: the Odes.

Other Roman poets, notably Plautus and Catullus, had imitated the Greek lyric verse forms, but no one before had used them so widely or successfully. Horace adapted the forms for the social life of Augustan Rome, and his Odes were not generally on ambitious themes: no epics or extended disquisitions, but 'occasional poems' on friendship, love, conviviality, patriotism, morality and day-to-day incidents, all treated with a wise and slightly self-deprecating modesty that Horace made his own. Repeated constantly are the uncertainty of life, the need for moderation, and the joys of tranquillity and contentment. Horace has therefore none of the depths and brooding pity of Virgil. Beside Catullus, he seems flat and tame. But Horace appeals to a wider circle than either, and his 'golden mediocrity' produced a sane, balanced and often pleasing self-honesty in phrases that have served as proverbs to the educated classes ever since.

The free horace odes are in pdf ebook format.

What slim, rich-scented youth, on roses lain,
now courts you, Pyrrha, in the grotto's shade?
Why fasten each blonde skein
of hair into that modest braid?

Unless for one who learns that gods may change,
and even faith must meet adversities
when sudden storm clouds range
across the dark, tempestuous seas.

Yes, he will love you in those golden hours,
for ever beautiful in that rapt gaze.
But swift the light wind lours
on innocence in that soft haze.

Your looks deceive him and outdazzle day,
but more through grief the powerful sea god roves.
With votive hung, I pay
my penance in these storm-drenched clothes.

The snows are fled away, the fields new grassed,
and trees are filled with leaves' rebirth.
The streams, diminishing, flow quietly past,
and in its turn is changed the earth.

In blatant nakedness the Graces play,
and with the Nymphs are chorusing:
recall, as hour and year remove the day,
in time there passes everything.

Cold melts before the western winds, and spring
is soon on summer's traces, then
comes autumn with its ripe fruit scattering,
and lifeless winter's chill again.

Though moon on moon makes good the heavens' waste,
we go on deathward still, and must
with Tullus, and with Ancus lie, and haste
with good Aeneas into dust.

Who knows what time we have, if gods on high
will add tomorrow to our wealth?
Take all the hand can grasp, for why deny
your soul what heir will grasp himself?

When you are dead, Torquatus, and must meet
the courts that splendid Minos holds, no stir
of eloquence, or family, or good may cheat
that fate, or make you as you were.

Diana left the pure Hippolytus
where hell with darkness ever reigns.
Nor from best-beloved Pirithoüs
could Theseus loosen Lethe's chains.

Most poems today, and therefore translations, employ "free verse" — generally syllabic verse, stress verse and/or prose, in some mixture or variety, with rhyme absent or indifferently used. In contrast, this version goes back to what earlier translators always recognised, that Horace is to be prized for his pleasing expression more than for his rather conventional thought, and that some highly-finished form of English verse is required to convey his intricate style.

For all their metrical polish, Latin lyric poems were probably spoken and not sung, though some, like Horace's Odes 1.10 and 21, may have been written for musical accompaniment.


Translators generally arrange the Odes in four-line stanzas after the German scholar August Meineke, who noticed that most poems are divisible by four. The arrangement works well for most but not all poems. Ode 4.8 has 34 lines, for example, though some believe lines 17 and 33 are spurious. More importantly, the content or grammatical structure is not always neatly packaged by the four lines, and in a few cases (e.g. III 12) seems closer to a three-line composition. However fashioned, any transcription of the Odes can only be an approximation. Latin has to be construed, i.e. words rearranged and prepositions added to be intelligible in an uninflected language like English, and that rearrangement destroys the literary fabric. In the Odes, moreover, the fabric is built of memorable phrases carefully arranged in Greek measures, where words are clearly chosen for their sonic properties, and then woven into sentences in far-from-usual speech patterns. Free verse, the usual medium of contemporary poetry, is not appropriate for so artificial a style, and syllabic verse has little shaping power. Any rendering should ideally convey in the English tradition what Horace conveys in the Latin. The style nearest to his in English is the eighteenth-century verse of the Augustan school, but that now seems rather stilted: a restricted vocabulary, personified abstractions, and frequent word inversions needed to meet the rhyme requirements of limited stanza forms. What I have done here is reemploy those cadences, metrical devices and aural subtleties in more free-running lines that are nonetheless organized in rhymed stanzas individually tailored to the Latin measures. The result is a reasonable indication of the sense, shape and appeal of the originals, but not of their compact phrasing or quantitative metres, which English, by its nature, cannot emulate.

Some of the Odes, like I 11 and I 18, use the same measure throughout: these are called stichic. In general, however, Horace uses combinations of measures, his favourite combinations being the Alcaic, Sapphic and five types of the Asclepiadian.

Horace uses the Alcaic for his more weighty and dignified poems. The effect, as L.P. Wilkinson {13} puts it, is to create the sensation of a gathering wave in the first two lines, a thundering fall in the third, and a rapid, often delightfully smooth, backwash in the fourth. I've adopted a 5 5 5 4 stanza here:

Once bred to hardship, let the boy advance
until his wartime training take its course,
and check with cavalry and deadly lance
the Parthians' ferocious horse.

The Sapphic is the lightest of Horace's strophes. The stanza lends itself to neat stanzas with rather end-stopped lines — a feature which Horace exploits in the Centennial Ode. I've aimed for the most concise measure possible, using a 4 4 4 2 stanza throughout for consistency. That requires some compression and attenuation of meaning in the Centennial Ode and the Sapphic poems of Books 2-4, but the gain is a lapidary terseness, as here in I.2:

Such snow and hail has Jove hurled down
upon our sacred hills, defied
by his fierce hand, that our vast town
lies terrified.

The Greater Sapphic, a larger measure, is employed in Ode I 8:

Lydia, by the gods above,
why do you burden Sybaris with so much love?
He, so tolerant of sun
and dust, the sunny width of Campus seems to shun.

The five Asclepiadean measures (their numbering differs between authorities) are broadly similar:

The first Asclepiadean imparts a proud and dignified movement, and Horace uses it three times, all of them commemorating his poetic achievement. I've adopted 5 5 5 5 stanza here:

Maecenas, of true regal stock the heir,
a friend to glory in, a strength to trust:
While some in charioting make play of dust
Olympus showers on them as they fare

Forever Tyrrhenian Seas oppose the pumice shore:
so mix your wine, and curb your hopes as best you may.
For even as we're speaking, time fleets on, and poor
are still its credulous descendents. Seize the day.

May that powerful Cypriot queen,
and stars of Helen's brothers, brightest seen,
where Aeolus winds have been,
let but Iapygas intervene

A calm and sedate measure used for Ode IV 5, which commemorates the blessings of Augustus' rule. I've adopted a 5 5 5 4 stanza here:

Bounteous son of gods, too long away,
who best defend the kith of Romulus;
from wise assemblies, come, make no delay
but swift return as promised us.

What slim, rich-scented youth, on roses lain,
now courts you, Pyrrha, in the grotto's shade?
Why fasten each blonde skein
of hair into that modest braid?

There are several other strophes, employed occasionally by Horace.

I've adopted a 5 5 4 stanza for the translation: it's a rather smooth, if not monotonous measure:

How put out are the girls allowed no play,
nor drink of sweet dark wine, but fear all day
a lashing from their uncle's tongue.

The First Archilochean is used in Odes I 7 and 28:

Let some of Ephesus and Mytilene sing,
Rhodes or Corinth with its double seas:
say which of Bacchic Thebes, or Delphi's Isle is king,
or like the Thessalonian Tempe please.

The Second Archilochean is used in Ode IV 7:

The snows are fled away, the fields new grassed,
and trees are filled with leaves' rebirth.
The streams, diminishing, flow quietly past
and in its turn is changed the earth.

The Third Archilochean is used in Ode I 4:

Before Favonus winds, the bitter cold retires.
Dry keels are hauled across the sands.
The flocks no longer keep to fold, or ploughman fires,
and frost is gone from meadow lands.

The Hipponactean is used in Ode II 18:

No ivory or gold emboss
the splendid panels of the house I own,
Hymettian timbers do not cross
from arch to pillars hewn of rarest stone.