Saw It All: A Verse Satire

In this tale for our times, where the Civil Service has become a political machine, an ambitious young protégé of Tony Blair's finesses the concept of 'spin' and does his master's bidding through the Whitehall corridors of power. In this he is joined by his secretary, Fiona, a beautiful woman out of our hero's social league but one who knows advantage when she sees it. 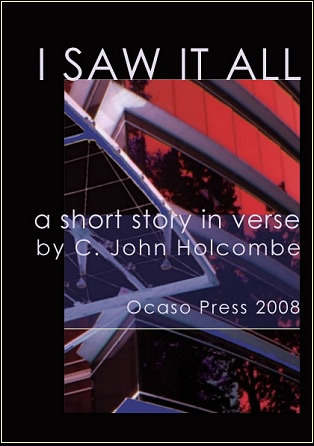 Only one obstacle stands in the way of our hero's climb to power, the wily Permanent Secretary, and Sir Roderick is not a loyal Blairite, though too astute to say so. He will have to go, decides our hero, but how? By gaining access to what Sir Roderick knows and writes, which can only be through the connivance of his Personal Assistant.

So begins the second of our hero's affairs, which leaves him physically and financially exhausted as Blair still hangs on to power. And then Sir Roderick tumbles the situation, no doubt helped by his PA, who is no more loyal to her lover than she is to official boss. In this grey world of contemporary politics what shines out are the sharply-etched portraits of the power brokers and their penetrating comments on life in twenty-first century Britain.

I saw it all: the judge's tone
from condescending fall to quarried stone:
The defendant will answer to the questions put.
I tried, more laughter, and was probed again:
lamentable to watch a tenderfoot
in courtroom manners pit his acumen
against the courtroom bullyboys in words
of explanation, point out all he did
was publicize the post, no more than that.
Against the regulations, but a bid
to stay abreast of where his game was at.
He used one woman badly where the great
impose their vast illusions on the state.

My stomach clenched. I heard the gallery
fall silent as the eyes bore down on me:
Unanimous, your Lordship — guilty.
It was done. Completely. I could lodge appeal,
and have my case reviewed, but bit by bit
the courts would let it drop: an imbecile
would know society had little time
for idiocy like mine. In going down
the narrow stairway to the courtroom cell,
I'd feel the weight of precedent, the Crown
loom high above me, and the pungent smell
of cold grey concrete hit me: what I'd face
unless and quietly I left this place.

What could I do? Silvered Sir Roderick's head
inclined itself towards me, though had said
but little, teasingly, as I had done
when first they brought our friends in from the Yard:
who went through noting how the place was run,
to whom give preference, whom press hard.
Two months, and slowly, week by week,
I went on charming with a devilish glee:
That's clearly possible, but I can say
no hint of that was authorized by me.
They opened notebooks, closed them, glanced away.
No: no one bothers with a stray remark
for all it light up, like a match, the dark.

Yours is a difficult and onerous task,
gentlemen, no doubt, but you will ask
for any help you need. Here nothing's lost
or can be covered up. We've been on through
a sea of correspondence-at some cost,
I'd add, to schedules we were working to.
They'd smile. I'd smile. A pause, and then I'd ring
the bell and in would come my secretary,
to pose at them, pour tea, hand biscuits out:
the well-endowed Fiona, fragrantly
she'd drift in front of them, in place throughout,
as friend and more, and put a hint across
to treat with deference her helpful boss.