Bely, Blok, Ivanov and Annensky are often grouped under Symbolist Idealism. {1} The poets were Idealists in seeing grounds for hope in the social and political turmoil around them, and Symbolists in a mysticism that drew heavily on Baudelaire and Mallarmé: words were symbols whose significance could only be found in the activity of writing. Viacheslav Ivanov, called 'Viacheslav the Magnificent' was the 20th century master of the grand style, and added erudition and polemics to the idea that literature was a religious activity, in his case Christian but with strong dash of happy paganism. In the 1890s, Ivanov repeatedly visited Italy, studying Renaissance art and Catholic mysticism. The sonnets in particular were also influenced by the rugged nature of Lombardy and the neighbouring Alps.

Ivanov’s poems were often majestic, solemn, and declamatory, resembling 18th century odes but studded with erudite references to the classics. 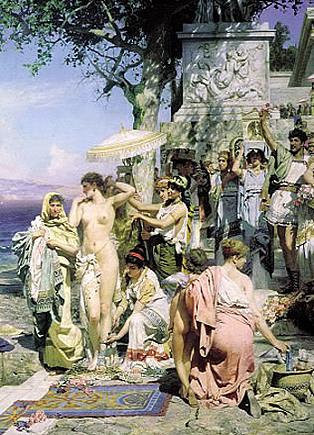 The poem comes from the cycle of Italian Sonnets, where the ancient gods are imagined to live again, or be still living. Ivanov was a master of the magnificent, and here he is picturing an altar to Dionysus (Evius) in an ancient theatre on Sicily (Ausonia) surrounded by the sea (Pontus). {1}


Melpomene is the Greek muse of tragedy, and Tartarus rules the underworld of the dead (here volcanic depths) where sinners are judged. Our rendering must clearly aim for something equally majestic and imposing.

The poem is a sonnet: iambic hexameters rhymed aBBa cDDc EEf GfG, where the feminine rhyme is shown in upper case:

The only rendering I have to hand is that by Evelyn Bristol, who has aimed for a close rendering in stanzas of the correct shape but unrhymed. {1} I give her first stanza:

Ausonia still is dark, but eastern skies turn red.
And snowcapped Etna sends an amber smoke ascending.
Its snow turns pink and burns. A purple light does shimmer,
Descending from its head, like unction fit for kings.

The Symbolists relished mystery, but the poem's difficulties are easily cleared up:

Line 3: одноцветный means monochrome and I propose to use 'unbroken' in place of Bristol's 'shimmer', thereby also suggesting that the process is continuous, from antiquity.

Line 9: Bristol translates В обломках спит феатр as 'In shards the stage sleeps'. I propose to translate the clause as 'these sleeping shards of stage'.

Line 13: волшебный круг пустынь, literally translated, is 'the magic circle of deserts'. Bristol has 'desert arc.' The reference is either to Mount Etna, I think, to areas of past lava flow around the summit that are desert (i.e. barren and support no vegetation). Or to the amphitheaters of Greek theatres. We cannot use 'magic' because 'magic circle' has other connotations, but 'crags of dusty circles' may serve.

14. дышащий под вертоградом плена., which Bristol renders as 'beneath a garden trapped'. вертоградом is the difficult word, which means 'helipad' now, but something like 'green city' then. I think Ivanov is here referring to Taormina, Sicily's famed tourist spot, as it was in Greek times, i.e. fresh and thriving. I propose to employ 'alive in green captivity' to emphasize that the past was still alive for Ivanov.

The translation is best done in phases. First to get the rhymes:

Beyond a dimmed Ausonia, the eastern sky looms red.
The smoke from snow-capped Etna rises amber-brown.
The snow reflects those colours; unbroken mauve runs down
as though with oil anointed stood that kingly head.

Through long groves of oak and silent fields it's come,
then on through olive groves and dawn-grey shores it flows,
so thence into the Pontus an airy blueness goes,
as the ruins can shimmer through their blessed propylaeum.

The music's gone, but from these sleeping shards of stage
forever smouldering is soul rising from the snow
for you, come east with day, to this most holy age.

As ever from your citadel: Melpomene
mourns Evius, but crags of dusty circles show
a Tartarus alive in green captivity.

And then to improve the rhythm, sense and phrasing:

Though dark is far Ausonia, the eastern sky is red,
and from a snow-capped Etna rises amber smoke.
The snow is bright. As though the purple colour spoke,
there pours out rich anointment of a regal head.

Through groves of oak and silent fields that colour's come,
and on through olive groves and dawn-grey shores it flows,
thence into Pontus, as an airy blueness glows
about the brilliant ruins in their blessed propylaeum.

No music here today, but on this broken stage
the soul's forever smouldering, rising from the snow
for you, come east with daylight, to this most holy age.

Thus mourning in your citadel, Melpomene,
is Evius, but crags of dusty circles show
a Tartarus beneath in green captivity.

Some tweaks to the poem's sense have been made, most notably in line 9. The earlier 'sleeping shards of stage' has been replaced by 'broken stage', which is the general sense of the Russian. The 'sleeping shards' doesn't make much sense in English, and phrases like 'broken, sleeping stage' are probably worse. The general aim is to make a decent poem, and not something that is all too obviously a translation, where what works in Russian no longer works in English.

As I see it, good translations are more re-creations than transcriptions. To get merely pleasing verse, however, which is not to be sniffed at, we work with close transcriptions of the individual Russian words, arranging and shading their meanings with all the craft skills available.

We have to check for style. Mirsky {2} says of Ivanov: 'His verse is saturated with beauty and expressiveness; it is all aglow with jewels and precious metals; it is like a rich Byzantine garment. "Byzantine" and "Alexandrian" are two very suitable epithets for his poetry, for it is all full of the products of past ages, very scholarly, conscious and quite unspontaneous. Ivanov is the nearest approach in Russian poetry to the conscious and studied splendours of Milton. In his verse every image, every word, every sound, every cadence are part of one admirably planned whole.' Have we reproduced that? A little perhaps, but the splendour of Milton? We have to try again, and since the rhymed hexameter is so stiff in English, perhaps try the pentameter:

Though Ausonia is dark, the sky is red:
a snow-capped Etna plumes in amber smoke
as though on snow a purple colour spoke
in rich anointing of a kingly head.

Through groves of oak and silent fields it's come,
through olive groves and dawn-grey shores it flows,
thence into Pontus, where a blue haze glows
about ruins in their blessed propylaeum.

No music now, but on this shattered stage
the soul is smouldering, rising from the snow
where, east with day, you near this holy age.

Sad your citadel, Melpomene,
as Evius is, but broken circles show
deep Tartarus in green captivity.

Perhaps a bit better, though we've lost a few Russian words. It's time to look further at what other translators have done. An attractive rendering by Markov and Sparks {3} uses different rhyme schemes. Their rendering of the first stanza is:

The eastern sky behind Ausonia' dark grows red,
The amber smoke rises above Mount Etna's snows
Which glows and burns . . . Jewel-like, flowering purple flows
Like regal unction out, from its fiery head

Copyright also lets me give the rhyme schemes in toto: red snows flows head     fields dim skim yields     silent eternal triumph    Melpomene circle captivity. We have a couple of approximate rhymes (silent & triumph and eternal & circle) but all very acceptable, I'd have thought. With that rendering in mind, we can write something a little closer to the Russian:

Beyond a dimmed Ausonia, the eastern sky is red
and smoke from snow-capped Etna rises amber-brown.
The snow reflects their colours; unbroken mauve pours down
as though with oil anointed rose that kingly head.

On through the groves of oak and silent fields it's come,
and then through olive groves and dawn-grey shores it flows,
and thence to airy Pontus the misted blueness goes
as ruins glimmer through their blessed propylaeum.

The music's gone, but on this sleeping, broken stage
the soul's forever smouldering, rising from the snow
for you, come east in triumph, to this most holy age.

Though mourning in your citadel, Melpomene,
is Evius, those crags of mystic circles show
a Tartarus still breathing in green captivity.

I hope this shows the value of consulting previous renderings. None of my lines copy those of Markov and Sparks, but their rendering did suggest useful rhymes, and get me to look more closely at the Russian. Translation is a cooperative affair, not a competition.