Bely, Blok, Ivanov and Annensky are often grouped under Symbolist Idealism. {1} The poets were Idealists in seeing grounds for hope in the social and political turmoil around them, and Symbolists in a mysticism that drew heavily on Baudelaire and Mallarmé: words were symbols whose significance could only be found in the activity of writing. Viacheslav Ivanov, called 'Viacheslav the Magnificent' was the 20th century master of the grand style, and added erudition and polemics to the idea that literature was a religious activity, in his case Christian but with strong dash of happy paganism. Generally his poems are not difficult, but 'Transcende te ipsum' needs some explication. 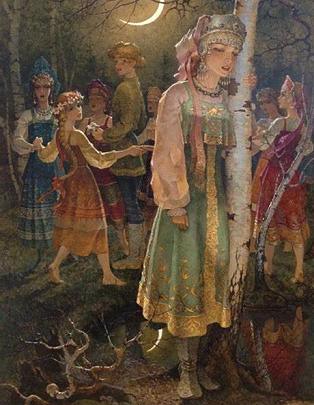 The phrase comes from St. Augustine, where transcendere is used in two contexts: in the platonic ascent of the soul towards God, and in the end of that ascent, which is God himself. {2} Sophia is wisdom, or the love of wisdom, female when personified. The Biblical Rachel was the favourite of Jacob's two wives; Leah was his unloved wife.

Making Sense of the Russian

The poem is a sonnet: iambic pentameters rhymed AbbA CDCD eFe gFg, where the feminine rhyme is shown in upper case:

The only rendering known to me on the internet is an attractive one by Professor Pamela Davidson. I give her first stanza:

The regal serpent has a two-pointed tongue;
The angel of Impulses has two wings.
To a parting of the ways your soul has come:
The ruler of this path is Rachel; and of the other — Leah.

A metred but unrhymed version is easily written:

The royal serpent has a two-forked tongue,
the angel ruled by impulse has two wings:
your soul is at the parting of the ways,
one led by Rachel, and the other Leah.

But since the original is a sonnet where rhyme is usual, I think we should respect the form. Our first need is to understand the poem, however, which is compressed and rather gnomic in places.

Making Sense of the Russian

Armed with the information above, we can write a prose rendering of the Russian:

The royal serpent (in the Garden of Eden) has a two-forked tongue;
The angel of Impulses has two wings.
Your soul has come to the parting of the ways.
one leader of this path is Rachel (contemplation); and the other Leah (action)

As two reins obey the bit,
So to one is (given) action, to the other good dreams.
Her name (i.e. her of the good dreams) is Renunciation, — whose business
is Detachment. Eternal Sofia (wisdom)

gives light to both. One (Leah) says ‘Transcend
yourself, embrace yourself in the infinite.'
Rachel says: "Transcend yourself, sink into yourself."

(That said,) She (Rachel) loves the other/alienated in the One,
Leah, however, loves the Divided/Separate One.
But both are bent over the dark (sinful, ignorant or unwise) deeps.

I doubt if Ivanov wanted to be entirely clear, but this interpretation is broadly in keeping with the more literal rendering by Professor Davidson, a Russian scholar and specialist in Ivanov's poetry.

The regal serpent is a fork-tongued sayer,
impulse's angel has a two-winged gaze:
your soul has reached the parting of the ways;
one's led by Rachel, and the other Leah.

As two-ways pulled the bit is by the reins,
to one goes action and to one blessed dreams.
One's Repudiation. The other gains
release from Contemplation. Sophia streams

out light for both. Transcend yourself, one cries:
dissolve yourself in All. But Rachel says,
diminish self that all division dies.

She loves the One that's lost into the All,
and Leah loves the One not All. Unless
they span the dark beneath they both may fall.

What is this riddling poem saying? Probably something along the lines that humankind must choose between a life of action (suitable for most folk) and one of contemplation (the few who practise art as a religious pursuit). Wisdom is needed in both walks of life. Indeed the two reach similar ends. By earnestly thrusting your self forward you will rise above your individual nature and reach God by appreciating the infinite bounds of the real world. By contemplation and sinking deep into yourself you will also reach God, if only by realizing that you cannot in the end lose your individuality. Both paths are built on and underpinned by the darkness of sin and ignorance.

My rendering is a little free, especially in the last two stanzas, but I have tried to make a poem of the translation, and in the manner of the Russian Symbolists.