Summary of the Poem

This translation of Jayadev's Gita Govinda into modern English verse is offered as a free pdf e-book, with notes and commentary.

The Gita Govinda — a cycle of Sanskrit songs, commentaries and invocations depicting Krishna's courtship of the cowherdess Radha — was the most popular and influential poem to emerge from medieval India. The text was added to temple inscriptions, set to music, choreographed for dance, and studied as a religious text. Contemporary poems, recitations, songs and dances point to its continuing popularity. With frank and tender lyricism, the Gita Govinda explored the many aspects of sexual passion, from first awakening through fierce regrets and jealousies to the rapture and contentment of bodily possession. On one level it narrates the loves of Radha and Krishna as simple cowherds, but the poem also celebrates nature's regeneration through sexual congress, the interplay of the human and divine, and the profound mystery of erotic experience. 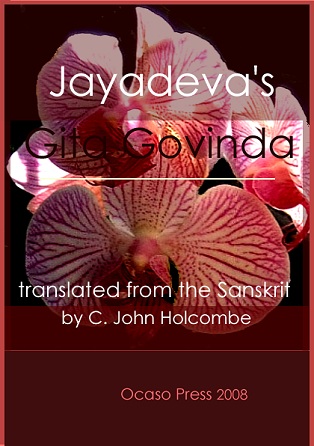 The poem can be dated to the twelfth century and was almost certainly written in north-eastern India, as it shows familiarity with Jagannath sects in Orissa and mentions fellow poets at the court of the last Hindu ruler in Bengal, Maharaja Laksmanasena (AD 1175-1200).

Many lines of evidence point to Jayadeva being born in Orissa, probably in Kenduli Sasan village, which lies in the Prachi valley of the Khurda district of Odisha, then under the rule of the Ganga dynasty king Chodaganga Deva.

In Orissa Jayadeva probably continued to live, the Laksmanasena connection possibly arising over confusion with another poet of the same name in Bengal. If, as some scholars believe, Gita Govinda was first performed on the Srimandir and the coronation of Kamarnava as the crown prince in 1142 AD, the Laksmanasena lines must be a later interpolation. Whatever the details, Jeyadeva appears by this interpretation part of the Oriya culture that built the erotic temples of Konark, Puri and Bhubaneswar. Poets are chameleon characters, however, and Jayadeva himself is reputed to have been a saintly ascetic induced to settle by marrying the temple dancer, Padmavati, and take up writing the Gita Govinda.

The latter was apparently a model wife, modest and devoted to Jayadeva, and very different from Radha, who is the typical heroine of classical Sanskrit poetry: proud of her heavy breasts and hips, consumed by longing, but also playful, sulking, jealous, tempestuous and despairing. Krishna is the eternal male: urgent and charming and uncommitted. Radha submits to his entreaties, but feels abandoned when Krishna returns to his other women. The ten long parts of the poem that separate Radha's first submission to her final reconciliation with Krishna, in which the lovers declaim and despair, appearing to say a few verses to each other or sending the go-between to plead their cause, allow Jayadeva to explore the changing moods of attraction, which are both natural to the situation, and what audiences expected. Krishna repents, longs for Radha, commiserates with her distress, waits for her, makes her jealous, importunes and praises her, enjoys and assures her of his love. Radha sulks and despairs, wastes away, flies into tempers, rails at Krishna, consents and finds joy and contentment with him.

Religious Dimensions of the Gita Govinda

With Jayadeva's poem became the focus of a religious sect in India. Buddhism and Hinduism sought to release the enlightened from worldly illusions through renunciation, meditation and physical austerities. Particularly to be avoided was carnal pleasure. In Gita Govinda, however, Krishna embodies the erotic sentiment, and in that sense the cowgirls serve him with rapture and unselfishness. Jayadeva developed the aesthetic experience of love, and the songs typically end with dedications to Krishna, which urge readers to cultivate an appreciation of a taste that is both mental discrimination and physical relish. The two are inseparable, each growing from the other. The poem combines the sweetness of the experiences described, the poetry itself, and the joy that devotees find in relishing Krishna through the text. Indian theologians took this concept of taste further, seeing the lover as someone lifted from the particular into an abstract and universal experience of love, which is the ultimate joy or beatitude, a taste of Brahman itself. The aesthetic experience became a religious one, a state of total absorption in, devotion to and enjoyment of Krishna.

Jayadeva brought song into classical Sanskrit verse, and developed the association with a beauty not easily matched in English. While the prose meaning of Gita Govinda can be brought over reasonably well, despite many ambiguities in the Sanskrit text, and the restricting form of English stanzas, the aesthetic qualities that make Gita Govinda supremely worth reading have to be created independently. Classical Sanskrit poetry was sonorous, repetitive, ornate, formal, ambiguous, and conventional. Its long lines with their various but intricate quantitative metres have no counterpart in English, any more than our explicit words have a religious dimension. My solution has been to use English verse devices to explore a text winnowed down to the bare bones of its Sanskrit meaning. A particularly harmonious line in the Sanskrit does not necessarily find its echo in the English translation, therefore, nor the other way about, though the Sanskrit will always tend to be the more beautiful, as its harmonies exceed even those possible in ancient Greek. In short, this translation stresses the literary more than scholarly or religious aspects, but the Appendix does provide a commentary, suggest what has been lost in the rendering, add a note on metrical issues, and list works for further reading.

With clouds the sky is thickened, and the woodlands
darken with Tamála trees. Tonight
comes someone leading home a doubting Rádhá
near the Yamuná, by Nanda sent:
from each path wandering, from wood to bower,
to win her Mádhava in honeyed sport.

As speech's deity adorns this house
by grace of Padmávatí's turning feet,
and prince of wandering poets, Jayadeva,
tells of Vásudeva and his Shrí.

If, passionate for Krishna's mind,
you're keen to learn the arts of love,
then hear the coaxing eloquence
of Jayadeva's tender verse.

Umápatidhara causes words to bloom,
Sharana dazzles with his lightning thought.
Dhoyí's lord of poets, Govardhana
has his love skills, Shrutidhara fame,
but Jayadeva is both deep and pure.

When world was water, you became
a tireless vessel of the Vedas.
You, in Pisces form, Keshava:
conqueror of the world, Hari!

When this heavy earth you carried
on your callused tortoise back,
how venerable you were, Keshava:
conqueror of the world, Hari!

A blemish on the hare-marked moon,
the earth became as on your tusk:
you held us when a boar, Keshava:
conqueror of the world, Hari!

With nail on lotus hand you cut
the bee-like Hiranyakashipu.
What a lion-man, Keshava:
conqueror of the world, Hari!

A marvellous dwarf, Keshava, you
outwitted Bali: from your toenail
water poured to bless the people:
conqueror of the world, Hari!

Bhrgu's lord, you made in blood
of Kshatriyas the people bathe.
As evil left, the heat declined:
conqueror of the world, Hari!

In Ráma's body, you have hurled
around you heads of Rávana,
a blessing of the war, Keshava:
conqueror of the world, Hari!

You carried beauty as a cloud
and shone as wielder of the plough
that struck with fear the Yamuná:
conqueror of the world, Hari!

Kind as Buddha, you refused
to take the sacrificial life
of animals despite our customs:
conqueror of the world, Hari!

In Kalki's body you became
a sword to scourge the foreign people,
comet-like in fire, Keshava:
conqueror of the world, Hari!

You, in a decad form, Keshava,
are the comfort of our life.
Hear the poet Jayadeva,

Sources and references are given in the free e-book.