This translation into modern English verse of Kalidasa's Meghaduta is offered as a free pdf ebook, with notes and bibliography.

The  Meghaduta or Cloud Messenger is a masterpiece of Sanskrit literature, and was composed by the court poet Kalidasa some time before AD 634 in northern India. A Yaksha or nature deity begs a passing cloud to carry a message across the subcontinent to his grieving consort in the fabled city of Alaká. Under this fiction, Kalidasa presents a sympathetic portrait of northern India, and weaves in the various moods of love traditional in classical Sanskrit poetry. 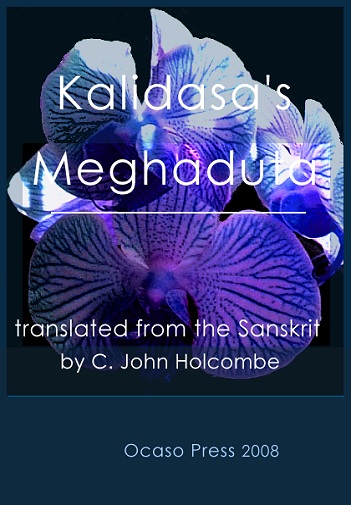 Early translations sacrificed the meaning to the exigencies of English verse. Later translations are close to the prose sense of the Sanskrit, but employ free-verse styles that give no hint of Kalidasa's elevated and harmonious language. The version here is taken from the standard 1912 Hultzsch text.

It employs accomplished English verse to render the simple magnificence of the original while remaining faithful to the meaning.

About its author, who wrote five or six other great works, little is known, but he may have served one of the pre-Gupta rulers of northern India at Ujjain. The poem is written in unrhymed stanzas of four lines in the slow-moving Mandakrata measure. Many translations exist, generally in the style of their period, some being designed to help Sanskrit students understand the grammar and vocabulary of Kalidasa's elevated and harmonious language. The work here adopts the 1912 Hultzsch text, and uses five-line stanzas of rhymed pentameters to render the simple magnificence of the poetry while remaining faithful to the prose sense. The few occasions where my intrepretations differ from those of previous translators, or I have been unable to fully encompass the meaning in a particular stanza, are noted in the Appendix, which also contains a short treatment of metrical issues, an introduction to Sanskrit poetry, and a glossary of unfamiliar words and allusions.

Although we read Kalidasa for the beauty of his poetry, any decent translation will contain many unfamiliar words and concepts, plus references to India's customs, religion, geography and animal life that illustrate and extend the narrative. Hence the ebook's notes, where it should be remembered that Kalidasa is India's Shakespeare, with a critical literature to match. Much is disputed: authenticity of texts, interpretation of lines, even the identity of some plants, places and animals. The reader will catch hints of such controversies on Internet sites, though most are the concern of scholarly journals. More in evidence on the Internet, and well worth following up, are photographs and details of places mentioned in the text, and proper treatments of Indian customs, religion, and mythology. Examples:

Stanza 1 Yakshas were nature deities, a class of semi-divine beings, benevolent and inoffensive generally, who attended Kubera, the Hindu god of wealth. Why this Yaksha was banished from home and consort in Alaka, we are not told, only that he had been negligent in his duties. The Ramagiry, or Rama hills, were probably located in east-central India at Namtek, in present-day Maharashtra, which was a popular place of pilgrimage allowing devotees to practise penances in hermit cells, monasteries or secluded glades. Sita, identified as the daughter of Janaka, a brave king of Mithila, is the faithful wife in the popular Ramayana story, who remains true to her husband Rama through appalling hardships.

Stanza 2 Ashadha is the lunar month of June-July. I have omitted emaciated from 'wrist'. The translated last line is rather condensed or unclear in the original, and I have added 'in heat' to draw out the meaning: the elephant-shaped cloud, in seeming to butt the mountain, reminds the Yaksha of past love-making.

Stanza 3 The general meaning is that a cloud, which brings thoughts of rain and so disquiet or happiness to the ordinary viewer, here causes the Yak-sha to remember his consort who loved to cling to his neck. I have read meghaloke as 'not-of-this-world-cloud', rather than the more usual 'cloud-seeing', to link the cloud's form with the insubstantial nature of memory. The King of Kings is Kubera, the god of wealth or treasures.

A year from amorousness: it passes slowly.
So thought a Yaksha by his master sent,
for scanting duty, to the Rámagiry:
to mope in penance groves as banishment
by rivers Sítá's bathing there made holy.

Áshádha's ending on the mountain found
him weakened, gold ring slipping from his wrist.
And mixed his pleasure as a cloud came down
so playfully to hug the summit mist,
as elephants in heat will butt the ground.

In tears withheld he took his fall from grace,
from wealth attending on the King of Kings.
The otherworld that brimmed in cloudy air
was still discomfort when far longing brings
a breath to hold him to that neck's embrace.

With now the rainy month stood close at hand,
to fresh Kutaja blooms he adds his plea
and asks most courteously the cloud bring news
of welfare to his loved-one — words that she,
revived to hear of him, will understand.

How can a cloud so moving, mixed and got
of water vapour, fire and wind be used
by Yaksha appropriately as messenger?
But he in eagerness and grief confused
mistakes as sentient a thing that's not.

Such clouds the ending of the world presage;
you minister to form at will. Though kin
I plead for are by power detained, better
to be by majesty refused than win
an approbation of base parentage.

I ask you, shelter from the sun's fierce glare,
as one apart, beneath Kubéra's sanctions,
to bear this message to a loved one waiting
in Alaká, where Shiva on those mansions
sheds garden's moonlight from his forehead there.

For you the women look through tangled hair
with men-folk travelling and take their cheer
from unions urged on by your path of air,
while I still distant and to blame appear
a hapless prisoner to another's care.