Events, places and personalities of the First World War that brought the old regime in Europe to an end. Each of these hundred linked sonnets presents a vignette of some aspect of the war through the eyes of its participants, mixing contemporary accounts with modern views on its causes, consequences and lasting repercussions. 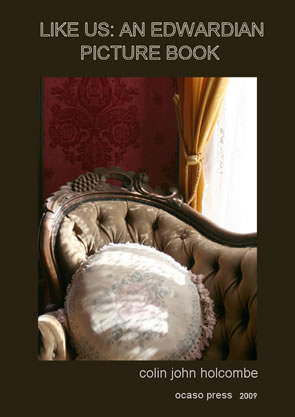 The Great War marked the collapse of the old world order, and the beginning of the modern state. Much of what we take for granted grew out of the bloodbath of those years, and we cannot understand ourselves unless we see modernism as a reaction to its horrors. Lost irretrievably in five short years was a belief in social norms, in the rule of reason, and the fundamental decency of human nature.

War's blunders and nightmares have continued to haunt us, giving an air of unreality to our high-tech conflicts, our art-forms, and our failing political systems. Art turned inward, and gave its practitioners a privileged vantage point, where their iconoclasm, experimentation and wide-ranging allusion became the hallmarks of authenticity.

Here the journey is unwound, and traditional verse explores the issues that continue to vex us in contemporary events and literature.

Like us they had their purposed, fitful schemes,
their bouts of passion and their loneliness,
and no more fanciful than ours were dreams
of modish parties at the new address.
Their laughter used our very words, though those
were not so compromised, and not in fee
to purges, wars and holocausts, could pose
throughout as breathy, sun-blessed honesty.
True, that old man of the sea in pink
still placed his burden on the continents,
but this they rose to and at times could think
was God-inspired, or honorable at all events.
Poor as many were, they still could bear
their name with dignity in common prayer.

Old embassies of sense, the delegations
of high-plumed officers that nodded head
towards equalities in other nations,
whose honour held to what was said
in ball or conference or tête à tête
as much as any brandished, ink-bound creed
of treaty conjured by the balding set
of politicos and ministers — indeed
was preferable, and forged the personal bond
in men who never lied and never cheated.
True, they fenced a little but, au fond,
were honest, principled, and so were treated —
if to a world brought up on different rules
becoming out-of-date and dangerous fools.

Strange sores and sicknesses, the children born
with gross deformities, dioxin sprayed
on half a country and another sworn
to secrecy with not a red cent paid.
The rain of phosphorous that rots the bones,
uranium that with a bitter taste
infests the craters left by passing drones.
For all once-living that is fretted waste
inhabiting the scattered, cloth-strewn stones,
for idle parables in levelled ground,
companionable with them, and the fading groans
of men expiring where they are not found:
we pray for soldiers shipped across the sea
on statesmen's promises that could not be.

Across that blighted interval of time:
depression years, fresh wars, misshapen hopes,
religion in itself but antique rhyme,
and goodness pummelled on the blood-soaked ropes,
we look upon the world which once we were,
a warm and settled one, of human scale,
where truth was knowable, and would incur
a lifetime's following though could well fail.
We're better paid, and cared for, entertained,
but sow our furrows in a stranger land
to reap, pass on or squander what we've gained
from that invisible, obedient hand,
and know the high forgiveness before
can bring no shadows back from that dark shore.