A concise guide to the schools of literary criticism: some seventeen schools are noted in this 150 page free guide, and ten schools covered in some detail — traditional, the New Criticism, rhetoric approaches, stylistics, metaphor approaches, Poststructuralist, myth criticism, Freudian, Jungian and fractal approaches. All are illustrated with a worked example and supported with extensive book and Internet references. 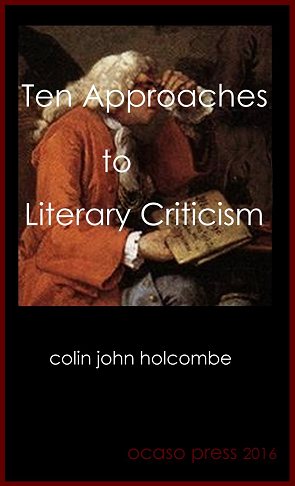 Literary criticism is not fashionable today, and has been replaced by theory in many university departments. What does continue to be written tends to concentrate on established figures. Nonetheless, a true appreciation of the great torrent of work that pours off the small presses generally needs something better than today's reviewing, which is often partisan, shallow and/or doggedly optimistic.

Literary criticism requires many skills, but those which the practicing poet needs to acquire are close reading, explication and evaluation. And the first two because most poems fail through lack of care. The originating emotion still clots the lines or, in striving for originality, the work becomes muddled, pretentious or incoherent.  Poems grow through evaluation, that dialogue between what has been written and what was originally hoped for, between what the poems say now and what it might with further work. Literary criticism helps the poet see his work as his readership will, honestly and from many viewpoints.

But the critic's eye is a rare gift, rarer than sainthood, Housman thought, and matters have lately become more problematic. Criticism is not fashionable, and has been replaced by literary theory in many university departments. The criticism that continues to be written naturally concentrates on established figures. The remainder, the reviewing/criticism appraising the great torrent that pours off the small presses, is often partisan, shallow and/or doggedly optimistic. Even the aims of criticism seem somewhat doubtful. No single critical approach seems invariably successful, and insights from differing approaches do not necessarily cohere. Nothing brings finality of judgement, moreover, and one critic's findings can be undone by another's ingenuity. Much more damaging, the premises even of literary theory have been uprooted by radical theory.

What does evaluation hope to achieve? There are many schools of thought, but all take as their starting point the analysis of the reader's or listener's response. Poems may be complex, requiring a good deal of explanation or even correction of corrupt scripts, but there has to be an immediate impact of some sort: not very strong, and not blatantly emotional necessarily, but something that allows the critic to ask: how is this obtained? how significant is it? how does it compare with similar works? No impact and there is nothing to analyze. The work has failed, at least where that particular reader is concerned, and no amount of critical cleverness, literary allusions and information will bully him into responding to what he cannot feel.

But who is the reader? Each and everyone, as Stanley Fish might claim, or Milton's "select audience though few"? Poets may not make money but they still have outlets to consider. Whom are they writing for - the editors of leading magazines, friends, society at large, or themselves? And to say something significant about the world around them, to resolve personal quandaries, to gain a literary reputation with those who count? In an ideal world all aims might be served by the one work, but the world is not ideal, and aims needed to be sorted out.