The Madness of Summer: A Novel

At the Buckmayne annual pageant, where he appears as the well-known and much-liked local archaeologist turned TV personality, Steven Whittaker stands on the brink of a brilliant career. True, there was his Jill, his ambitious wife, who is suing for divorce over some misunderstanding with the Lawley sisters. And the sisters, the alluring Penny and bewitching Imogen, seem bent on casting spells over him and the ancient Dorset landscape as midsummer approaches, no doubt egged on by the Pagan Historical Centre, whose helpers are turning up ever more unlikely finds at the dig Whittaker supervises. Nothing he can't sort out, he assures his TV film director, his Head of Department, who has never hidden his dislike of Whittaker's teaching methods and his pied piper influence on students, and even the surly Ned Barnes who wants a new age festival on the dig site 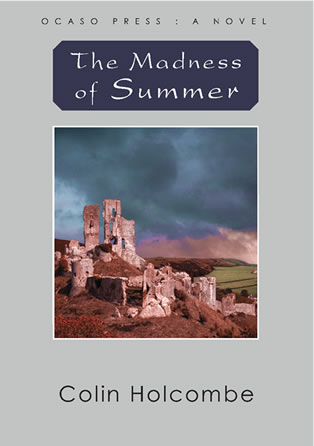 One by one the strands of Whittaker's sensible life come apart as Dorset folklore intrudes into and reawakens his unfinished business with Penny Lawley, with that disastrous school trip, and with his own future that lies buried at the Leyton Rings excavation.

After the performance I saw my family off and returned to the Buckmayne Community Centre. Chairs had been stacked away, and a crowd pressed round the makeshift bar. Martins brandished our drinks.

'What was that again?' I said when we clinked glasses.

'Whittaker, my dear boy, I was asking about the woman you were avoiding earlier.'

Martins pulled out a notebook. 'Celia the fairy was played by . . . '

'Played by Imogen Lawley, who looked ravishing in a lavender-blue number. Any more charmers you know?'

'Penny Lawley. In white over there, talking to the vicar. She was the shepherdess.'

'I do know my Iolanthe. In fact I'll go over to have a word with her now, which will let you get back to the sister.'

'Imogen can ask me any time. But hark, the damsel approaches.'

'Imogen,' I said when she stood in front of us, 'this is Joel Martins, director of Casebook Films. Imogen Lawley, reporter on the Dorset Times.'

She surveyed the plump figure with its tangled mop of graying hair. 'Doesn't look like a film director to me', she decided, staring up through those extravagant lashes.

'Very true,' conceded Martins, seeing Imogen pose in exasperating innocence. 'But we have to employ the most unlikely types. Even Stephen here is going to be a star of the small screen. History in the Community, Time and Tradition. We haven't decided on a title yet. Depends on what we find locally. Could be quite rewarding, wouldn't you think?'

'I don't know what you mean, Mr Martins.'

'I mean you should come for a screen test.' He gave me a flustered look before turning back to the woman who smiled at him indifferently. 'With your sister. We need local people.'

'Good God, Whittaker. Is the place overrun with talent?'

'Whole tribe of them', I said gloomily, wondering if Martins knew what he was taking on. But in fact Melissa had married and moved away, to Ludlow or somewhere, the smart wife of an accomplished country lawyer. Penny was the left-over, the damaged goods, and only Imogen could be called shameless, the vamp with the pale green eyes and snub nose. 'Excuse me, you two', I said. 'Ought to circulate.'

'Who now?' said Martins, reaching for his notebook.

'Ted Ten Percent. Imogen will explain.' The woman gave me an open stare: Imogen with the tight hold on life, who gives exactly what she promises.