A play in verse that brings to life the turmoil of Mary Stewart's last years in Scotland.

By circumstances, character and upbringing, Mary was incapable of ruling her inheritance. She had none of the political cunning, the dissimulation, or the ruthlessness needed for such difficult times. Though she had arguably the greater claim on the English throne, through her grandmother, Mary made no moves to threaten Elizabeth, accepting the Protestant conversion and pointedly not supporting the Catholic aristocracy—a policy of even-handedness that eventually cost her the support of the Catholic nobles and so the throne. 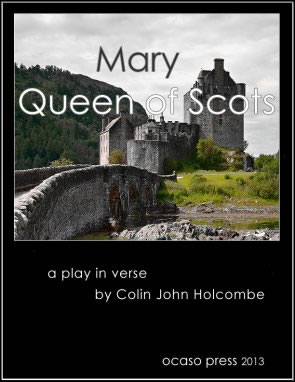 Mary made serious mistakes. Her first was to choose Lord Darnley: a good-looking young man with claims to the English throne whose arrogance alienated the leading families —which is no doubt why Elizabeth sent him. But Mary fell in love with the preening youth, married him and had a son before his less savoury aspects became impossible to overlook.

Bothwell and other nobles murdered the offender, possibly with Mary's connivance. Bothwell then kidnapped Mary—with what acquiescence again isn't known, but requiring a hasty marriage to preserve Mary's honour. Yet Bothwell was no more acceptable than Darnley had been, to the nobles, the populace and probably to Mary herself in time. An uprising against the two followed, the promised support from the Hamiltons and others never appeared, and Mary was forced to surrender for Bothwell's safe passage from the battlefield.

The rebels reneged on the terms of surrender, imprisoned Mary in the Douglas stronghold at Lochleven, and forced her to abdicate. From here, in yet another reversal of fortune, and with the help of her gaoler's dashing young brother, Mary escaped, raised an army and seemed likely to regain her throne. But treachery once again intervened when Argyle went over to the other side. Mary fled the battlefield and took refuge with Catholic lords in south-west Scotland, where she made another of her ill-judged decisions. She crossed into England and threw herself on the good offices of its queen. But Elizabeth refused to meet her, illegally kept Mary a prisoner for eighteen years, and allowed her to be drawn into the treasonous Babbington plot, for which Mary was executed at Fotheringhay Castle in 1587.


The play is issued in free ebook format, and includes notes on the characters and historical setting. The text may be used free of performance royalties if the author is acknowledged.


Act One Scene One (Opening)

Our countrymen have done their sturdy best
to make our new-found queen come warmly dressed
in dance and piped parading through these halls
as cannons echoing from harbor walls.

What this high-born beauty comes to, all the same,
are realms that hardly know their sovereign's name,
to whom the office of a settled court
is foreign to them as a well-phrased thought.
There are no law-courts here or government
10. save what the lords can say or may relent
in punishment and so have wrongs redressed.
By wealth and family is worth assessed.

She is a Guise, and that high ducal race
was never slow to claim its lofty place.
She is a queen, moreover, born to rule,
and no doubt headstrong but is not a fool
in ways of statecraft. Even Catherine will
have taught her something, no doubt teaches still
in closing France to her as though she wed
20. the least of her ill-favoured brood instead.

I see the Stewarts more, that dream-led race
that counts on fortune, is more apt to chase
the bubble apparitions of the hour
than plan and soberly secure its power.

She was the foremost in the Valois hope
of wooing subjects for their threatened pope.
Some great flower she was to all of them,
who looked for offspring from that grafted stem.
That was her purpose; to that glorious role
30. she was committed, body, heart and soul.
No other gifts or handsome, manly guise
have ever captured Mary's topaz eyes.
She loved that poor, weak stammer, that still-
a-boy, with all the ferment of her girlish will.
He was her heart's own need for warmth and show,
and other forms our Mary does not know,
or does not seem to, though that startling prize
may fall as thunderclap to opened eyes.
Let's hope her options are presented well
40. for with epiphanies she may not tell
the good from falsehood, and so hurt the State
by choosing spinster-like, in haste and late.

But all this comes from what is strange and far
to us, from strained imaginings, if such they are.

It was the wedding brought her out, a bloom
that had been cultivated in a shuttered room
but then was scattered on the genial air
of Paris, that could only gasp and stare.
In that she learnt her beauty and her charm
50. could win all others over, and disarm
the most inveterate of bitter foes.