Euripides did not hold public office more than was obligatory in the Athenian state, and our certain knowledge of him is very slight. He was born around 430 BC into a relatively wealthy family, wrote some ninety-two plays, won first prize on four occasions, and died in Macedonia in 406 BC. 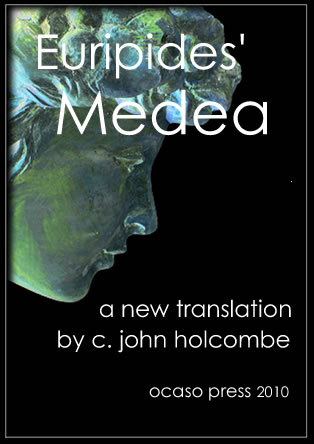 Medea was put on in 431 BC, together with his Philoctetes, Dictys and The Reapers, but won only third prize, losing out to work by Euphorion and Sophocles. There are several manuscripts, each with their textural issues, but all descend from a compilation of Euripides' plays made by Alexandrian scholars around 200 BC.

The Medea legend was well known to Greek audiences. After the voyage of the Argonaughts, and the dangers which the love-smitten princess helped him escape, Jason married Medea and brought her to Iolchus, fleeing to Corinth when Medea contrived to have King Peleas murdered by his own daughters. Unfortunately, though she had borne him two sons, Jason then threw Medea over for Glauce, the daughter of Creon, King of Corinth. The repudiated wife plotted revenge, and, as the play opens, faces exile for speaking against the royal house. But Medea extracts a stay of execution from Creon, and then the promise of sanctuary from the visiting Aegeus, King of Athens. Apparently to win over Glauce, who would persuade Creon not to exile her sons, Medea sends the princess a robe and a golden chaplet, which the gullible woman dons and dies from in great pain. Creon tries to save his daughter, but he too perishes. In a final revenge, Medea kills her own children, and escapes to Athens in a winged chariot provided by her ancestor, Helios, the sun god.

But Euripides went further than portraying a barbarian sorceress who escapes punishment. He made her murder her own children, which was not in the original legend. Revenge can be a reckless emotion, and Medea's actions sweep up the innocent with the guilty. She sacrifices not only those whose murder will hurt Jason most, but her own happiness thereafter. A woman who lacked husband, children or homeland was to Greek eyes someone who barely existed, and Medea is an exile in many ways: by leaving her native Colchis, by being banished from Iolchus and then Corinth, and by possessing barbarian blood and passion in the Greek lands of reason and moderation. Moreover, if Medea becomes the personification of the Greek hero, she is denied a cause beyond her own passions. Her intelligence, political skill and strength of purpose would have equipped her superbly to serve as the dictator Greek city states sometimes installed in periods of extreme danger, but her sex would have equally disbarred her from the role, as would the consuming passion that wreaks destruction on all it touches.4 How many of our cherished ideals - democracy, freedom from terror, equal opportunity - also lead to disaster if pursued to the exclusion of everything else. Medea is an unsettling play, and still relevant to our times.

Though one of Euripides' masterpieces, the piece is not without its problems: a key section that may not be by Euripides, Medea's disclosures to the Chorus when secrecy was essential, and the savage triumph of Medea that closes the play. No modern piece would flout naturalism like this, but few perhaps look on life as did the Greeks: inescapably tragic but made tolerable to us by its beauty. It was Euripides' craft that brought Greek audiences to accept and be reconciled to the brutal and uncertain world around them, and it is essentially that poetry I have tried to echo in this fully rhymed translation.

Would the Argo at the Simplegades' jaws
had never journeyed on to Colchis shores,
nor ever trees cut down from Pelion's glen
had made fit oars for heroes, those first men
who sought for Peleas the Golden Fleece.
For then Medea, on her wild caprice,
would not have travelled to Iolcus towers,
nor shown, for love of Jason, those fierce powers
that made the Peleas daughters parricides -
10. from which, in quiet Corinth here, she hides.

Once settled, though, she led a careful life,
was popular with all as Jason's wife.
She gave him sons and counsel and support
and he in turn behaved as husbands ought,
since lives that would be blessed and trouble free
need marriage partners bound in harmony.

Now everything's disrupted. Jason's spurned
his wife — my mistress — and their sons, upturned
all principles to take the daughter's hand
20. of Creon, ruler of this Corinth land.
Medea, furious and nothing loath
to raise up Gods, reviles that wedding oath.
She will not eat but wanders round in pain,
retires to weeping, has that grief sustain
a deadly fury at her husband's ways,
though to the ground she turns her vengeful gaze,
as deaf to friends as is the sea-bound stone
except to bend her snowy neck and groan
for father, country and ancestral house
30. she lost eloping here with her false spouse.

How bitterly she's come to understand
the sense in staying in one's native land.
She shows more hate for sons than any should,
and nurtures plans in which there's nothing good.
I know her ways, and that tempestuous heart
will not put up with her low husband's part.
She's much more likely to thrust home the sword
in her own vitals than live on ignored.
Or she will creep up when they sleep alone
40. to strike at Jason, or at Creon's throne,
and kill the princess and her family.
Much, much more she'll do, and no calamity
should make her challenger suppose he's won
before her dangerous enmity is done.

The free Medae by Euripides is in pdf format and includes a glossary and references.