This edition of the poem is the first full English translation since Julia Soskice's rendering of 1929. The free pdf ebook contains an Introduction, Biography, a literal version, full Russian prosody, notes and references. 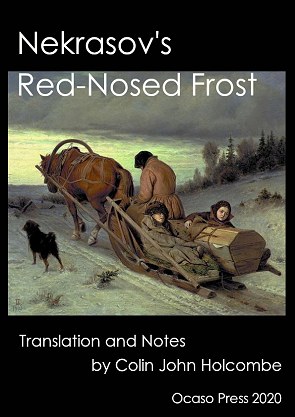 Nekrasov's poem is prefaced by a dedication to his sister, and then divided into two parts. The first is entitled The Death of a Peasant, and describes (with some flashbacks) the death and burial of the peasant Prokel, his parents and wife Dar’ya attending. The second is entitled Red-Nosed Frost, and describes the death of Dar’ya, again with flashbacks.


At his best, Nekrasov is incomparable, writing with intense humanity, often with biting satire and savage invective. He was also able to incorporate colloquialisms and slang into his verse, compose in loose ternary measures, and carry off such incongruous matters quite naturally.  Whatever the faults, there are poems that only Nekrásov could have produced: The Pedlars, Who Can Be Happy in Russia? and Red-Nosed Frost.

Nekrásov's constant theme was, as he put it, 'the suffering of the Russian people' and in Frost the red-Nosed he gave an everyman status to Russia’s peasantry.  Red-Nosed Frost is the most literary of Nekrásov’s works — in the Dedication,  the idealisation of Slav women, in the depiction of General Frost and the elegiac sections that end the poem. Contrast these with harsh realism in opening sections, the folkloric elements in Part Two, and the many vignettes of peasant life, and Nekrásov’s strategy becomes clearer.  It is one of collage, of adding a thickness of narrative with varied themes and styles. Where Pushkin would have seamlessly woven in the needed elements, Nekrásov juxtaposes different styles and episodes, giving a cinematic sharpness to the poem, as though the world is seen from different perspectives, with some of the inconsequentiality of real life.

The free e-book in pdf format.

Opening of Part One: Death of a Peasant

A roan mare stuck there in the snow:
two pairs of feet in bast-cold shoes
and sled with cloth-wrapped coffin show
what wretched things she has to use.

The woman’s old, large mittened, tries
to clamber down and urge on horse.
The icicles that rim her eyes
disclose that frost is out in force.

With that sketched in, as poets may,
we change the scene and back may go,
to when both hut and village lay
beneath a heavy pall of snow.

A hut: whose corner holds a calf,
the bench a corpse, not yet interred.
Around it thoughtless children laugh:
a woman’s sobs are barely heard.

Her needle tacks a funeral shroud
from fabric scraps she has to spare.
Like rain in prospect, and unbowed,
unnoticed is her weeping there.


To three hard fates their futures run:
the first be husband to a slave,
the second mother such a one,
the third be one until the grave.

And all these heavy lots from birth
have women born of Russian earth.

The ages may correct their crimes,
the world has altered many times,

but God forgot to change but one:
the harshness of a peasant’s lot.
Decayed their beauty, strength undone:
such is the future Slavs have got.

Unfair descendent of that fate
that you have borne unseen, unheard:
a conflict from that desperate strait,
yet of that grievance not a word.

But you will tell me all at last —
who were my friend from childhood years —
the long fatigue of centuries past,
today’s enactments of your fears:

And he would lack a living heart
who shed no tears for your sad part.