An introduction to the poetry published by Ocaso Press. A good selection of poems, some complete and some excerpts, that illustrate the styles, variety and themes of Colin Holcombe's work. The poems are not grouped by date or appearance in collected form, but so as to provide some continuity to enjoyable reading through themes that progress from childhood through love in its all its forms, to society, travel, history, the miseries of war and oppression to the thoughts that close off our human existence — broadly speaking: there's considerable overlap. All the collections are represented, but the bulk has gone to the more successful pieces. There is also a succession through the book from simple, song-like pieces to more serious and denser poems. Many poems are too long to be printed in their entirety, and are given as short excerpts. 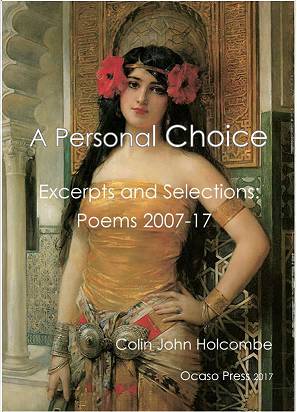 This is poetry as it once was, before Modernism imposed its narrow filters: an attempt to express the elemental human condition, memorably, eloquently and truthfully, through a wide breadth of subject matter, search for beauty of phrase, and deliberate verse craftsmanship.

The poetry is not simply a return to the past, however, but a return from the past in themes and treatments that Modernism has chosen to ignore.

One such is the preoccupation with contested social issues, doubtless unwelcome in state-funded academia, but strongly present in pre-Elizabethan, Augustan and Romantic poetry. Second is the development of strict forms into believable voices. Third is the emancipation from indrawn Modernist preoccupations to a keen animal appreciation of the world, the bodily happiness of being alive. Also included are excerpts from verse tales and play, matters not seriously attempted since the nineteen thirties, when poetry was an extension of good prose, not the wholly different animal that today caters for a shrinking segment of the book-reading public.

Some 120 poems are represented, introduced with a review of contemporary poetry difficulties. A free pdf ebook.

One has had enough in the end of the grand
addresses, of Pont Street Dutch and the high rents,
the flaunting oneself before the stretched-out limos,
and marquees shimmering behind the week's events.

Enough of Greenwich, or of Hampstead even, where
the erudition is bred of a foreign earth
and the air is unhealthy with such fumigation,
though rain runs briskly through the rollered turf

Hounslow I came to, where the twinkling gravels
of the Thames and its poplars and the light blue sky
were rinsed for the first time, where yeoman farmers
brought in their produce to suburbs that lie

Now gardened and contented in priveted
decency, each with a garage and buttressed wall,
where the small man held castle, and the living
could turn to stone slowly at the twilight's fall.

Half mythic are these Downlands, where a steady fume
of cloud will lift all day and fade into a tranquil
blue. A wealth of pasturelands, of ragged trees,
and incandescent rapeseed interspersed with wheat,
that forms a counterpane to realms beneath, that chalk-white
world of towering, gold-torqued men who charioteered
across the warm abundance of their breathing earth.
Each day a lived inheritance, a born again,
till brute extinction met them with the glittering legions.

To misplaced reveries are gone their soft white bones.
Whole armies of shadows together inhabit the standing corn.
Red blusters of poppy are seeded on the sacred wounds
and at evening the warriors encircle the hill forts and couch-
grass knits a restless silence over unkempt tombs.

Swollen as they are and part of earth-time, the tusks,
femurs and molars - huddled together in fissures,
in long loams, in gravels well-pummelled - canticles
of enamel moving with the rivers that brought them,

grinding south and south, with the ice-blocks floating:
the auroras of winter canopied in their small brains,
the husks no doubt also of summer in their soft hides,
only we cannot see them, all that hugeness gone

greedily but without stain into the heavy tills -
the Gipping, the Chiltern, the Lowestoft drift:
tough, glutinous blanketings that the great bones
work in and founder, and are never released from.

For imponderably they are of this time and this place,
uncomfortable or diminishing as that may be,
in docks or foundations of industrial buildings,
things that are nondescript but carefully planned.

As such these pantechnicons of the flood,
ruminating and then melting into the tundra,
may almost be part of our own tenured lives,
integral with the weather in this late warm spell.

The world is how we know it, what we wake
to in each opened moment of our lives
which otherwise are obdurate if not opaque

to all embodiments of goods and wives,
that blessed enabling that is always ours,
as promised surely as the pilgrim strives

to reach those self-delighting, heavenly powers
that rise instinctive in the air we breathe,
the light perpetual out of noonday hours.

With this I take my final parting, leave
to you this world of wonders, pray my tongue
was ever honest with you, will bequeath

a swelling sense of happiness among
the brethren of our faithful here below,
in harmony with what the angels sung.

Which we may hear, if listening as we go
about His purposes, and quietly trace
the lineaments beyond this world we know.

So blessings of His word, and may His grace
attend you always as you journey on
to sense the forwardness of that far place

that's ours in majesty, when all is gone
from us, our breath, our bodies, those we love:
and we but paths on whom His mercy shone.