Jean Racine was born in 1639, orphaned at a young age, and brought up on charity. He was given a first-class education by the Jansenists at Port Royal, and spent a further two years at their college of Beauvais. Rejecting their austere teachings, however, Racine began writing for the theatre in 1660, and by the time of Phaedra (Phèdre), performed in 1677, had nine plays to his credit, several of them masterpieces of the French classical theatre and containing some of its greatest poetry. The play was poorly received, however, and Racine retired to marriage and a court position, though returning a decade later with two further plays: Esther and Athaliah. 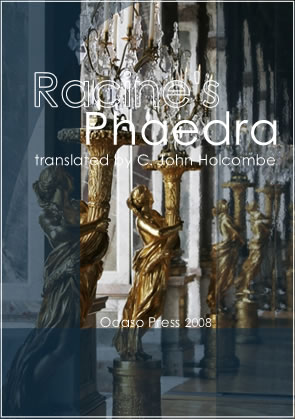 With a character described as voluptuous, uneasy and jealous, Jean Racine was an ambitious courtier, an astute businessman, and a frequenter of actresses, but he was also a childhood believer in the Jansenist doctrine that man is a miserable creature saved only by God's grace, and playwriting seems no longer to have interested him in later life.

Theseus has been gone six months from Troezen. In his absence, Queen Phaedra fights a guilty passion for her stepson, Hippolytus, and he nurses a secret love for Aricia, a princess of Athenian (enemy) blood, to whom Theseus has forbidden marriage. When news comes of the death of Theseus, Phaedra, urged on by her nurse Oenone, declares her love for Hippolytus, but is rebuffed. As acting ruler, Hippolytus then releases Aricia from her marriage restraints, declares his love, and the two reach an understanding that Aricia will return to claim the throne of Athens. Phaedra, endangered and humiliated by her rejection, resolves to become ruler in Troezen to protect the child born to her and Theseus. The wandering Theseus unexpectedly returns. Oenone accuses Hippolytus of an attempted rape, and the enraged Theseus calls on Neptune for vengeance. Aricia and Hippolytus agree to marriage and exile together. Alerted by the suicide of Oenone, and Phaedra's behaviour, Theseus now reconsiders, but the curse cannot be undone. A monster rises from the sea to terrify the horses of Hippolytus's chariot and drive its rider to his death. Theramenes, Hippolytus's tutor and friend, returns to describe the frightful scene. Phaedra confesses her sins, dying by poison. Remorseful and of sounder mind, Theseus makes Aricia heir to the throne of Troezen.

The free ebook in pdf format includes the French text, glossary and references.

HIPPOLYTUS
I leave, Theramenes: my course is set.
No more in pleasant Troezen will I let
myself be agitated by unease.
I start to blush at idleness that sees
my father's six month's leaving us has led
to unknown destinies for that dear head,
which places yet unknown to me may hide.

THERAMENES
Then, Prince, where look for him? I've scoured each side
the oceans bounding Corinth for some word
10. of Theseus, what was rumoured, who had heard.
My search to calm your natural fears has led
to shores where Acheron fades into the dead.
I've called at Elis and from Taenarus
surveyed the waters swallowing Icarus.
What makes you think that through some happy place
the steps of our dear hero left their trace?
Perhaps the king, your father, is not prone
to have the secrets of his absence known
and while we tremble for his life he stays
20. in blessed tranquillity, in hiding plays
with some new love who cannot yet suspect. . .

HIPPOLYTUS
Now, good Theramenes, show more respect.
Our king renounced such errors with his youth,
and that once dangerous obstacle to truth,
his fateful, wandering heart, is as the throne,
bestowed on Phaedra, and on her alone.
As I too, leaving what I cannot face,
return my duty to its rightful place.

THERAMENES
Since when, my lord, would you avert your gaze
30. from childhood's peaceful haunts of happy days?
Which you prefer, I've seen, indeed have sought
above the stir and pomp of Athens' court.
What peril - worse, affliction - could you fear?

HIPPOLYTUS
Those happy days are gone. All changes here
since gods have sent to us across the sea
the child of Minos and of Pasiphaë.

As the racine's verse characteristics page indicates, the French alexandrine is nothing like the English pentameter. The difference can be heard in this recording of Phaedra, the famous section where the queen denounces her enemy (Act One Scene 3, lines 269-316):

Note the varied pacing, both in the reading and the translation, essential to the effect. The free ebook includes the French text, glossary and references.