Alexander Pushkin was born in 1799 to an ancient aristocratic family and died of a duelling wound in 1837. In that short and often thwarted life, Pushkin modernized the Russian language, widening its vocabulary, removing archaic terms, and employing tones of address that would make Russian a fit vehicle for a century of poets, novelists and short story writers, many of them deservedly world famous.

Published in 1827, The Gypsies is the last of Puskin's southern cycle of romantic narrative poems, and the most popular. 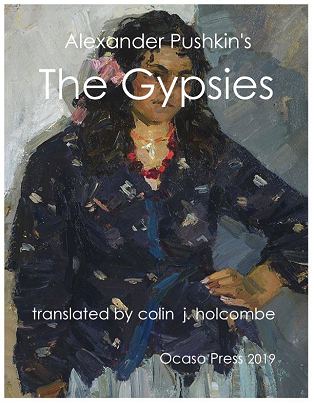 In it Pushkin moves away from the earlier influences of Byron and Chateaubriand, and fashions something cooler and more exact, a style that will serve him well with the later Eugene Onegin and The Bronze Horseman.

'among the greatest works of Püshkin. . .

The Gypsies are not treated realistically but merely as ideal representatives of a natural state of human society. . . a strong affirmation of freedom. . . and patently a plea for anarchism. It was Pushkin's first attempt at tragedy and one of his greatest. It is less easy to do justice to its poetical beauty, and speaking of it, one is too likely to forget the lesson of restraint that is the best lesson to be learned from Pushkin. The verse, less fluent and voluptuous than in The Captive and in The Fountain, is tighter, fuller, and more saturated with complex expressiveness. Such passages as the old gypsy's tale of Ovid, the end of the poem (with the speech of the old man on Aleko's murder), and especially the epilogue, are unsurpassable summits of poetry.'


Excerpt (Opening of The Gypsies)

The gypsies in their noisy way
that far through Bessarabia roam
are camped across the river, stay
in threadbare tents that make their home.

5. But they are free: the heavens keep
their welcome for this peaceful race:
between the wagon wheels they sleep:
the folded rugs give each his place.

A fire burns: around the blaze
10. are people on their dinner bent.
In open fields the horses graze;
a tame bear’s loose behind the tent.

The steppelands come alive with sound
when on the morrow all are found —
15. while children cry, and women sing —
to exit from their camping ground
to beats the marching anvils bring.

For now there’s only silence where
the night for nomads takes its course.
20. The bark of dog or neigh of horse
comes thinly through the steppeland air.

The lights are doused, and everywhere
a calm collects. The moon is bright.
The camp beneath its heavenly care
25. is flooded with a silver light.

But one old man is not asleep
and from the warmth the ashes keep
still gazes from his tent to see
across the steppeland's distant sweep
30. the night mists glimmer hazily.

There went his daughter, far from sight —
so much in love of freedom grown
she often wandered on her own.
She will return, but now the night

35. is dark about him, moon foretold
to leave its cloudy-pillared state,
yet no Zemfira comes, and cold
the scraps of food left on his plate.

The extensive references for this entry can now be found in a free pdf compilation of Ocaso Press's Russian pages.