The speaker is Hushang ibn Dilawar, ruler of the small sultanate of Malwa in what is now Madhya Pradesh in north-central India. Hushang came to the throne in AD 1406, inheriting the kingdom from his father who had declared himself independent of the Sultans of Delhi after Tamberlane's invasion of 1398. Hushang introduced a policy of religious toleration, encouraged sufis and Islamic clerics to settle in the kingdom, and employed many Rajput (Hindu) soldiers in his army. Most of Hushang's wars were with neighbouring sultanates, but he is shown in the poem as a typical Islamic ruler — dispensing justice at the durbar, maintaining a splendid court, and in extending the power of Islam. 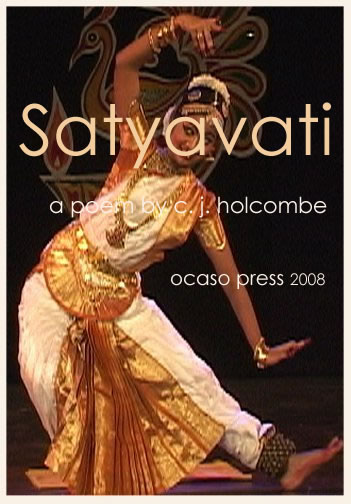 India has many poems telling the love of Islamic rulers for Hindu princesses, most of them ending badly. Hushang's misfortunes stem from his character — his distrust of Satyavati's brother, whose death he engineers, his massacre of Chatrapati's court, and his attack on the stronghold of Satyavati's family at Ujjain.

The Rajputs practised sati, and Satyavati's death is likewise inevitable: she dies by taking powdered diamond.

The poem is available as a free ebook in pdf format.

The durbar's ended and the hours,
stiff and yellowed in this heat
as calico or sun-browned wheat,
repose as supplicants — asleep.

I leave for prayer and soft impress
of bodies as the years are shed
in ministrations, tenderness:
the hot breath falters on my head.

And afterwards there's music, delicate
as midnight dew-pressed in the grass,
or ripples in the fountains lingered
over as the night winds pass.

In all India Oudh for evening,
dawn, Benares, shimmering white,
but dusty as it is Mandu
withholds its splendour for the night.

Hushang ibn Dilawar.
Sharp Sword of the Sultanate,
Pillar of the World and Faith,
And not in all a poppy-weight

of what I would be were my fate
in just relation to my state,
or if the plucked sarangi spelt
the syllables that choke the heart.

Wide are my realms — hot, mellow
wheatlands, thick with cotton and
with saffron, pomegranates, yellow
citrons: scented all of them

with pungent odours of the fields,
with smell of rodents and of oxen,
and cool that every coppice yields
in steeps of quietness and shade.