This second book of That Still Abiding Fire is again modeled on Dante's Divine Comedy, and also uses the terza rima form that generates terse expressiveness if handled correctly. But here hell is more contemporary — not some bottomless pit where sinners are treated to ever more diabolical torments, but the world around us, how we adulterate and ruin what should be beneficent and beautiful. 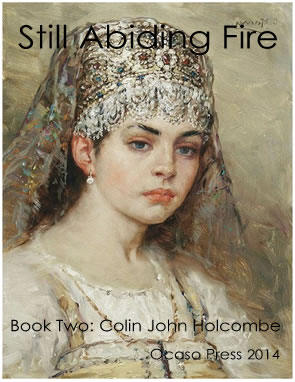 This, the most uncomfortable section of the series, describes the miseries of war and civil unrest. As before, the sections are built around characters, some actual and some fictional, but all are telling real stories. We move from the Mongol conquests and their impact on the Muslim world, to journeys of the Buddhist monk Huanzang, and then to the Vietnam War. Power misused features in the next section, the war in Afghanistan and its perpetrators, Bush and Blair. Next comes the holocaust and Nazi medical experiments, and then, via Saint Francis, the Crusader conquest of the Holy Land.

The conquest of the New World forms the next section, and this is followed by the civil wars of nineteenth century China. To bring us up to date the poem ends with the Mexico drug war and contemporary business practices.

My name in Vietnamese means sparkling pearl,
but also fragrance in the falling rain,
with all things delicate, a little girl

who, yet more distantly, may hear again
her mother talking to her, saying: far above,
the high moon watching us must also wane.

So choose, my child, my sweet, my little dove,
a simple countryman, when never die
the Mekong river lands, to which your love

will come as evening mists, where green fields lie
both thick and comforting, and where the toes
can root their thoughts in fertile mud. The sky

will bring us rain in season; wind that blows
is moist and open-mouthed; our ancestors
will whisper softly to us while there glows

the warmth of green within the bamboo floors
of granaries, and we can hear the fish
that glint and waver as the sunlight draws

itself to darkness and we eat our dish
of smells and quietness as the evenings bid
us help our countryman. We did not wish

a hurt to anyone. It's true we hid
our patriots beyond the reach of plane
or gun just as the Buddha would amid

our living consciences, when we attain
a sense that all are brothers. Smoke and heat
then come, and sudden soldiers. No explain

why buffaloes be killed, or why must treat
us all like criminals when no one spoke,
or tie our headman up and beat and beat

with rifle buts until his old bones broke.
The more I cannot tell of: mother say
the moon abandon us poor river folk.