Translating the Elegies of Sextus Propertius

The Elegies have seen several translations in recent years, and another needs to explain itself. In this version I have tried to:

1. Improve on the felicity of previous work, creating something that can be read with pleasure as a contemporary English poem.

2. Produce a close rendering that echoes the terseness of the Latin text using techniques that are largely traditional but also draw on the work of Modernist poets.

3. Identify the important features of Propertius's work, relating them to Latin elegy in general and ensuring those features are carried over into the English translation.

4. Discuss previous translations, particularly matters of technique, showing how the artifice of a high tradition requires a quieter and more conservative style than is usual today. 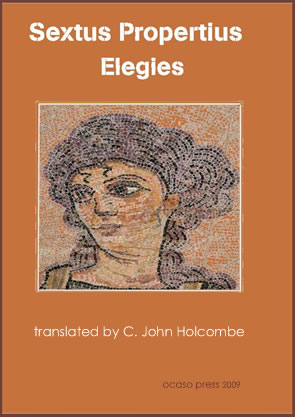 Those who care for verse, however, and prefer the renderings of Pound {9} and Lowell {13}, for all their shortcomings, will want something better, a translation that hints at the poetry. That in turn requires a style unlike the demotic free verse of today, and a return to the close argument and elevated language by which Propertius succeeds in the Latin tongue, i.e. a rendering that:

Says what the Elegies say.

Employs the rhetorical structuring by which Latin poetry is built.

Reflects the style, tone and diction of Propertius.

Portrays some of the characteristics that distinguish Propertius from other Latin poets.

Transposes the verbal felicities of Propertius into equivalent English achievements.

Because Latin is a compact language, where much can be expressed with few words, the rendering will need the longer English verse line, probably the hexameter or the pentameter. By experimenting I have found that pure hexameters give an undistinguished verse with no sense of the original couplets. Rhymed pentameters require a lot of work — the Elegies exceed four thousand lines — and produce something that lacks urgency. Unrhymed pentameters provide a supple verse but again with no real sense of the original couplets. That leaves the hexameter plus pentameter and the hexameter plus tetrameter. The first is the quieter, more flexible and more accommodating to the sense: an important consideration. The second emphasises the couplet division by running together lines of different length and nature. The unhurried hexameter, which tends to break into 2:4, 3:3, 4:2 or 5:1 rhythmic units, is quickly rounded off by the succeeding tetrameter, a strongly coherent line in English.

There exist of course passages where neither possibility will fully capture the sense, the two most grievous being:

Was it for ornament the Dioscuri twins
for Phoebe and Helaira burned? (1.2.15-16)

Where the Latin mentions Leucippus and the Dioscuri twins by name:

Not so did Phoebe, daughter of Leucippus, set Castor aflame, or her sister Hilaira, do to Pollux with her ornaments.

Where the Latin is much fuller:

You would not be known in your patch of earth: Ilium would be a matter for few words, and you too, Troy, twice seized by the Oetaean deity.

A similar problem arises with the proper names, which Latin accommodates readily but iambic metre does not. What reads smoothly as elegiac couplets may become congested in translation:

But why use a regular form at all? The current preference is for free verse, and readers may lack the training even to hear traditional forms properly. If most translations from Pound onwards have adopted some form of free verse, why try to put the clock back?

There are several reasons for doing so. Firstly, the original is in a tight form and, though regular English verse sounds nothing like the Latin, a faithful translation will bring over as many of the original features as possible. Secondly, the Elegies are written in an elevated style, and this is the domain of traditional verse, not of free verse that engages more directly through contemporary words and speech patterns. Thirdly, free verse is the more limiting style, and previous attempts have not overcome the need for everyday naturalness, either sacrificing the meaning to deft phrasing (Pound), or vice versa.

Because any version is a fusion of styles, those of author and translator, it may help to know the aims of this rendering:

1. Write a compact, quiet and well-mannered verse, using simple techniques to bring out the properties of words, notably vowel harmonies and wide-spaced alliteration.

Make sad no more my grave with weeping, Paullus:
those deaf shores will drink your tears unmoved.
Prayers may change the gods above, but, Charon paid,
the path is fixed unalterably. (4.11.1-4)

2. Increase the marmoreal nature of the verse by writing a strict iambic wherever possible, only varying this as outlined in 6. below.

3. Make the hexameter-quatrain a complete unit, the metre continuing seamlessly across the couplet.

4. Where appropriate, to increase pace and variety, allow the sense to continue across couplets (which in Latin are more self-contained.)

Think how the untilled soil throws out its brilliant hues,
and ivy spirals by itself,
how pretty strawberry trees will grace deserted hollows,
and water, untaught, find its course. (1.2.9-12)

5. Use a strict and emphatic metre in didactic passages, or those of simple description:

Tarpeian Jupiter resounded from bare rock,
unknown our cattle to the Tiber.
Remus's the house that soars with flights of steps:
one hearth was all the brother had. (4.1a.7-10.)

6. Shift the stress to words that reinforce the meaning, i.e. let the lines lose their regular iambic metre and approach stress-verse, in these cases:
a. emotionally charged passages:

b: where the verse echoes a choral measure:
I am the first, priest of the clear fount, bringing to Latin
sacraments a Greek song. (3.1.3-4)

7. Vary the: a. precision of beat: from a sharp impression:

Stranger, what you see as mighty Rome was grass
and hills before Aeneas came. (4.1a.1-2)

to an only faintly sensed metre:

Was it because Jove took that wild shape from your features
you became a haughty goddess? (2.33A.13-4)

b. arrangement of constituent units:

Make sad no more my grave with weeping, Paullus | those
deaf shores will drink your tears unmoved. 5:5
Prayers may change the gods above | but, Charon paid |
the path is fixed unalterably. 4:2:4
The god of that halled gloom may hear | but his dark door
will give no passage to our prayers, 4:6
and when the dead wind through the Underworld | a pall
of white shuts off the burnt-out pyre. 5:5
So howled sad trumpets when the threatening fire was thrust |
beneath the bier and bore me off. 6:4 (4.1.1-10)

8. Make sure the lines are properly cadenced, adopting a more free verse approach only for the emotionally-charged passage:

Nestor's pyre was lit, though had his fated age
been met by guard on Troy's walls
he'd not have seen his son Antilochus interred,
nor cried out: 'Death, why come so slow?' (2.13.45-9)

9. Employ a natural word order wherever possible, while still allowing some reversal to maintain the cadence of lines and accommodate the proper names that Latin allows so readily and English does not. An unnatural word order sometimes appears, most notably:

But in mitigation it should be said that elegiac Latin verse itself often uses anything but natural word order. Here:

10. Retain the more striking characteristics of Propertius's verse: abrupt switches to mythological examples, elision, sudden moves from third person to second, frequent starts in medias res, omission of the verb 'to be', and employment of the historical present for vividness.

11. Allow the iambic metre to indicate the pronunciation of proper names, but also show the main stress by a line over the vowel concerned where uncertainties can arise. For example: Calliope, pronounced Calli'ope with stress on the 'i' and not the 'o', is shown as Callïope.

I have limited myself in this January 2014 revision to rephrasing the translation a little, and to making rather more factual corrections than should have been necessary. Though the aims of the original version seem justified by results, this is probably not the approach I'd adopt today. Propertius seems one of those authors where translation divides into correct but not very pleasing renderings, and improvisations in loose English styles. The second approach now seems the more promising, or at least something closer to that of my Georgics translation, where the hexameter is replaced by short, individually cadenced units that aggregate to Latin line lengths, i.e. a free verse patterning within a formal verse envelope. Though the verse in this rendering does rise to the occasion in some of the more famous elegies, much is still too uninspired, stiff and mechanical.

Partly this reflects the original text, which itself becomes rather mechanical after Book Two, though the Latin retains many pleasing effects that do not carry over into English equivalents. There is also the fragmentary and sometimes uncertain nature of the reconstituted text, indeed becoming more fragmentary as scholarship proceeds, which often spoils any emotive shaping that could be drawn from individual elegies: fragments remain fragments.

But the real reason, beyond my own individual failures, is probably the refractory nature of the Latin, the sheer detail and allusions that Propertius packs into his dense lines. How that is to be overcome I frankly do not know — beyond skimping on detail and leaving out the more cumbersome names, as Pound and Warden were apt to do — but one solution may be to abandon the search for English equivalents to classical verse forms, and strike out in new directions altogether, which current translators may be now attempting.