Tranters: A Cautionary Tale in Verse

The whole lot of them were chancers, good-natured philanderers who take up various trades in London but who never settle, being always attracted to women and their mysterious ways. But Charlie Tranter does settle, and balances family life with innumerable affairs, until he gets into one scrape too many. He is away on the usual fling when his wife and young kiddie perish in a house blaze. 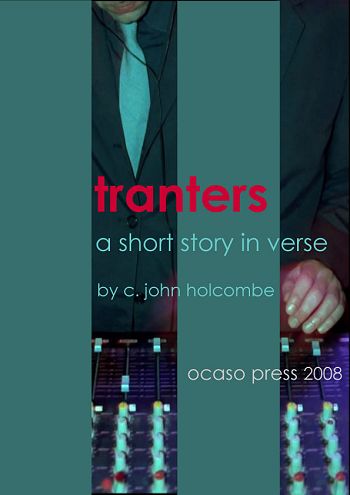 The local press go to town on the episode, and Tranter loses his job. But not for long. Irrepressible as ever, he is soon a rep travelling in ladies underwear, and the pattern of conquests begins again over the southern counties of England. Slowly, however, our ladies man begins begins to tire of his feckless life, and starts to escape by reading.

Now he remembers his childhood hopes, and dreams up a New Age religion, which is phenomenally successful, as only someone of Tranter's salesman's gift could make it. The reprobate has a vision of a someone waiting for him, his elusive soulmate, and he travels with her to a castle in the darkest Carpathians. When the dancing ends, and Tranter returns to everyday reality, he finds his devotees have had that vision themselves. What does it mean, and how will Charlie Tranter make good on his misspent past?

All their famed lives they were drifters,
Feckless from the start.
No rich man in the cherry stones, but choosing
The rough trades and the mart.

All was their brimming oyster which
They left in dawn-white heaps,
And women trashed in their bridal sheets
Others had for keeps.

Poised to be irregulars,
Pressed and abruptly gone:
Down highways where always were soft voices falling
Convivially and on.

The dark trees spread in their eyelids,
Evening wraps the skin
And windows will light them from highways and byways,
And warm smiles let them in.

This little Tranter went to Haymarket,
This one to the Scrubs,
And this one in laughter ran all the way home with his
Takings from the pubs.

Now don't you ever be like them said
My strait-laced Auntie Jane.
You can make yourself a real life and a half
With brawn and tad of brain.

And so I did: no dunce in class
I went to the local tech.
And for every success at board and bed
The Council sent its cheque.

But who will find me a good goer,
And who a young bride?
Who will take me beyond the natter and tether,
The dreaming world aside?

The high-steppers dangled such darkness
Of hair and glittering breasts:
And always such tempests and spangled tears as I
Plumbed their treasure chests.

Peerless of Peckham, despair of Ruislip,
The pride of Kensal Rise
And many and many a time the whole night long
I shut their fluttering eyes.

You can get to me on a Tuesday, or
Any day you please
We were married in June when even birds
Fell out of the sad trees.