Marina Tsvetaeva saw the world of art as the natural domain of a privileged elite, and spent the period of 1922 to 1939 abroad as an emigre writer. The 'Newspaper Readers' is a celebrated poem of Marina Tsvetaeva's (1892-1941) later years, showing her laconic exposition and broken prose sense to best advantage, is often cited as evidence of how novel Russian verse of the twentieth century can be, Stalinism or no Stalinism. Its short (trimeter) lines may ensure that rhyme is abandoned in favour on rightness of tone and word choice. Indeed, the poem seems so evidently made for free verse that anything else tends to make anything else seem contrived and inauthentic. Is that inevitably the case, or can rhyme — difficult though it is — contribute anything? In this worked example I look at the pluses and minuses of rhyme in Modernist works. 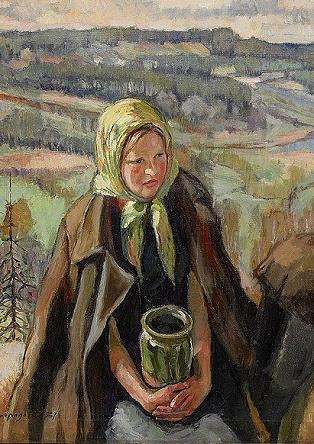 As Michael Watchet notes, {1} the poem contrasts the immediate gratification in meaning that a newspaper affords its readers with the subtle interplay of meaning, typography and sound that a Tsvetaeva reader has to grapple with. The poem is indeed set out like a newspaper column, tightly rhymed but with the sense repeatedly suspended and emphasized.

That repetition extends to rhymes and genders of words. It's a sophisticated exercise conducted in condensed, snapped off lines.

The poem is in iambic trimeters:

I have been able to find only two renderings, both on Ruverses and excellent in their free-verse way. I give the first eight lines of each.

The underground snake crawls,
Crawls, carries people.
And each — with his own
Newspaper (with his own

It crawls, the underground snake,
crawls, with its load of people.
And each one has his
newspaper, his skin

5. disease; a twitch of chewing;
newspaper caries.
Masticators of gum,
readers of newspapers.

Underground it crawls,
the snake, but carries people:
on its own it hauls
out newspapers for sheeple.

5. An irritable skin disease
with bone-white space conceders:
what mastic chewers squeeze
out for newsprint readers.

What readers have they got —
10. athletes, soldiers, the undead?
A skeleton but not
faces for newspaper spread.

It’s like all Paris dressed
from top to navel only.
15. Comely the girly breast
but leaves the birth bit lonely.

He lives with sister, says
he killed his father, sways,
blown up with pettiness,
20. to foul, drunk ways.

Are such folk followers
of sunrise or sunset? Do
such emptiness swallowers
read all newsprint through?

25. Not as slander, that is,
embezzlement, evasion,
lies sets in columns, gratis
of para's abomination.

Will, at those final Atonements,
30. when you stand before the Light,
you, grabbers of small moments,
believe the newspaper right?

Go, get lost, vanish!
Terrible maternal trash.
35. But is the Gutenberg Press
worse than Schwartz’s ash?

Better be body snatchers
than in some prurient infirmary,
be one of those scab-scratchers
40. finding news confirmatory.

Our sons rot in the mud
in their prime, great fighters.
Who corrupts their blood
but the newspaper writers?

and I stand before the face
50. — there is no emptier place —
or even of personal space
the news editor can grace
with filth.


Comments on the First Draft

1. First some general points. Tsvetaeva's piece is in strict iambs, but I have loosened the metre a little, to better encompass the prose meaning and to introduce a more provisional and relaxed tone. Is this correct? Probably not. Tsvetaeva's words are more scornful than this.

2. Tsvetaeva is fond of elliptical constructions, which leave only pointers or milestones to the full meaning. For that reason alone it seems wise to to reproduce the original typography. {3} The frequent repetitions also serve as rhythmic-intonations, transmitting the rhythm of the subway train movement, the poetics of the avant-garde (expressionism) and heightening the emotional tension. {4}

3. This is a best guess at the meaning, not of course by a Tsvetaeva scholar but by a jobbing poet. That may be acceptable for a first draft, but critical articles {3-4} then have to be consulted.

4. Lines 1-4. The snake is the Paris Metro, and although Tsvetaeva does not really make this clear, it's vital if readers are to visualize the setting. Critics also believe the repetition of lines 3 and 4 is important in emphasizing the repetitive nature of the news. Shambat's rendering reproduces the feature.

5. Lines 5 to 7 are enigmatic. Shambat and Feinstein largely reproduce the Russian, word for word. I make a stab at the meaning: the newsprint looks like ezcma; the bone is the colour of the newsprint 'white space'; masticate refers not only to the chewed-up appearance of the copy, but to what newspapers do with the original facts. This should be brought out more.

6. Lines 11-12 are complicated: a reference to how newsprint actually looks, how much of the news is faceless, i.e. churned out by anonymous journalist, and how its inaccuracies get more people arrested and killed. The previous renderings imply this.

7. The draft has made lines 13-16 more difficult than they really are. There is a sexual innuendo in the 'giving birth to newspapers', but it's not blatant. Women dress the way fashion dictates and the same unthinking attitude creates the herd instinct of newspaper readers. Previous renderings:

Which — entire Paris
From navel to forehead wears!
Enough, girl! You'll give birth to —
Reader of newspaper.

All Paris is dressed
this way from forehead to navel.
Give it up, girl, or
you’ll give birth to
a reader of newspapers.

8. Lines 17-20 are presumably nuggets of information to be found in the newspaper. They haven't been much commented on, but may exemplify dull and then scandalous lives.

9. The 'sways' in line 18 is important. Tsvetaeva is visualizing passengers swaying from side to side as they are carried, reading their newspapers, through the Metro. The rendering should bring this out more.

10. Lines 21-22 are probably social comment: do readers belong to the manual trades (who get up at sunrise) or to the partying bright young things (who come to life after the sun goes down)?

11. Line 29. Though clearly chosen to get the rhyme, 'atonements' is not the right word. Страшный суд actually means 'the Last Judgement', as Feinstein correctly renders it.

12. Line 34 (Стар материнский страх) is unclear. Shambat has 'Old is the mother's fear.' Feinstein has 'the old maternal terror'. Clearly the trash / ash rhyme is inappropriate.

13. Line 36. Schwarz's powder is gunpowder. The Abyssinian War had broken out, leading Tsvetaena to fear (correctly) that world wars were in prospect. {4}

14. The poem was written in 1935, at the beginning of the show trials that would lead to the Great Terror, where some 700,000 people were interrogated and executed by the NKVD. Though Tsvetaeva is really criticizing the Parisian bourgeoisie, the Russian show trials were a complete dereliction of journalistic integrity. Lines 45-53 are commenting on this. (And if Tsvetaeva is sounding self-righteous and unrealistic when dissent in Stalinist Russia was immediately fatal, she was also horribly prescient: no one is recorded to have failed to confess or implicated others under NKVD interrogation).

Underground it crawls,
the snake, but carries people:
on its own — it hauls
out newspapers (it hauls

5. out its own skin disease!)
with bones as white-space dividers
that mastic chewers squeeze
out for newspaper readers.

What readers — the old, the athlete,
10. soldier? — No features, no faces.
No years. A skeleton — complete
with faceless newspaper graces!

Which — is an all-Paris worth
of top to navel dressers.
15. Girl: stop! —
You'll give birth
to what the newspaper possesses.

— "He lives with his sister" it says —
"He killed his father" they sway —
puffed up with pettiness
20. in their lurching way.

Are such folk — followers
of sunrise or sunset? Do
such emptiness swallowers
read newspapers through?

And when the Last Trump comes,
30. when you stand before the light!
grabbers of minute's sums,
will you read newspapers right!

— Go! Beat it! Confess
a mother's fear is allowed us.
35: Mother! Is Guttenberg Press
worse than Schwartz's powders?

Best choose grave at once
than some prurient infirmary,
being the scab-scratching dunce
40. seeing newsprint confirmatory!

Each and every son,
who were prime of life fighters:
what has mixed blood done?
Newspaper writers!

45. What friends — to think then
when stronger these lines stand?
What do I think when
the manuscript’s to hand,

and I stand before the face
50. — there is no emptier place —
or even of personal space
the newspaper editors grace
with filth.

I'd say this rendering just about works, imparting a neat formality to the otherwise sprawling lines, but at the cost of semantic accuracy. It is not difficult to make a more iambic unrhymed version closer to the Russian.

Underground it crawls,
the snake and carries people.
All carry — on their own
their newspapers (their own

Which — is the all of Paris
dressed from top to navel.
15. Come on, girl! —
No birth,
please, for newsprint readers.

Sway — "He lives with sister" —
Lurch "He killed his father" —
they sway and lurch in vain,
20. pumped up with pettiness.

Are they — followers
of sunrise? Sunset? Does
swallowing emptiness
make the newsprint reader?

25. Newspapers — read slander.
Newspapers — embezzlement.
Whatever column — a lie,
Whatever paragraph — is worse.

And when the Last Trump dawns
30. you'll emerge to light!
You grabbers of small sums
who are the newsprint readers!

The grave's a better choice
than lewd infirmary
where you scratch at scabs
40. that make the newsprint readers!

Tell us why each son,
festers in their prime.
You have mixed their blood,
you, the newsprint writer!

45. Do we, friends — appear
the stronger for these lines?
What am I to think
with manuscript to hand?

Here I stand before the face
50. — there is no emptier place —
and tell you — not a person
the editor of news
but scum.

Note that this unrhymed verse is much closer to the Russian, which suggests we rework the rhymed version as:

Underground it crawls,
the snake, carries passengers.
On their own — each hauls
out newspapers (his, hers

Which — is an all-Paris worth
of top to navel dressers.
15. Girl: stop! —
No birth
for what such print possesses.

— "Lives with his sister" — sway —
"Killed his father" — press
So is their lurching way
20. pumped up with pettiness.

Are such folk — followers
of sunrise or sunset? Do
such emptiness swallowers
read newspapers through?

And when the Last Trump dawns
30. you'll emerge to light!
You grabbers of small sums
who are the newsprint readers!

The grave is best at once
than lewd infirmary
with scab-scratching dunce
40. and news confirmatory!

Tell us why each son,
festers in their prime:
what has mixed blood done?
Made writing news a crime!

45. Do we, friends — appear
the stronger for these lines?
What have we to fear
at manuscripts' designs?

and I stand before the face
50. — there is no emptier place —
there is no personal space
that editors must grace
but filth.

Is it best to start with an inaccurate rhymed translation or with an accurate unrhymed version? Trial and error is often the only way of knowing.