A true hexameter, with Latin verse structure replicated, cannot be written in English, but an approximation forms the medium of Longfellow's Evangeline, {23} one of his more popular poems.

In the Acadian land, on the shores of the Basin of Minas,
Distant, secluded, still, the little village of Grand-Pre
Lay in the fruitful valley. Vast meadows stretched to the eastward,
Giving the village its name, and pasture to flocks without number.
Dikes, that the hands of the farmers had raised with labor incessant,
Shut out the turbulent tides; but at stated seasons the flood-gates
Opened, and welcomed the sea to wander at will o'er the meadows.
West and south there were fields of flax, and orchards and corn-fields. 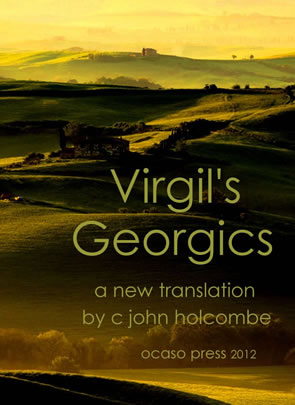 The difficulty, as Highet {24} pointed out, is that the style pleases no one. To English readers it sounds rather prosaic, each line unnecessarily hobbled with a final disyllable. English generally lacks spondees, and to classicists the disyllable pressed into service hardly matches what a quantitative language provides.

Something more than a careful quietness is difficult to achieve with this form, and it seems not to have been used to translate the Georgics.

Here only requirement is that the verse be a strict iambic, and that the lines invariably consist of six feet. It is the metre I've adopted for this translation, building on the free verse example given earlier. The hexameter is a difficult form, however, and requires a good ear for phrasing and wordchoice even to get the following, which has a natural but perhaps not very pleasing rhythm (from the Aeneid, by the classics translator of a generation back, Patric Dickinson): {25}

There are others assuredly I believe,
Shall work in bronze more sensitively, moulding
Breathing images, or carving from the marble
More lifelike features: some shall plead more eloquently,
Or gauging with instruments the sky's motion
Forecast the rising of the constellations:
But yours, my Roman, is the gift of government,
That is your bent — to impose upon the nations
The code of peace; to be clement to the conquered,
But utterly to crush the intransigent.

Aims of the Ocaso Press Translation

1. A few liberties have been taken in completing lines and phrases, but not so much that any short section, selected at random, could not be immediately identified with the original. The translation is as line for line as I can reasonably make it.

2. Occasionally I have had to add a word or lose one to keep within an acceptable hexameter form, but significant departures are very few and noted in the Glossary.

3. Virgil, and Latin writers of the period generally, do not employ striking images, but stock epithets. My policy here has been to:

a. Write a fuller line than the Latin strictly says on the rare occasions that space allows something more worthy of the original. Some examples:

1.313: the spring come blustering in with rainy showers

1.433 she sail the tranquil heavens with her horns undimmed

3.14-5: For where the broad and slowly winding Mincius
meanders through its water-reeded banks

3.144: where fields are green with moss and plumpest grass

3.333-4: where darkness seems to congregate
and give an air of holiness to shadowed depths.

3.521-2: nor can the water coursing through the plains
that falls as quick electrum over tinkling rocks.

4.30-2: a wealth
of thyme and savory that fills the air with pungent
scent, and violets that drink from bubbling springs.

4.63: or sound of flames when roaring through a furnace flue.

4. 466. from daylight's first of dawning till the day retired.

b. Respect the deeper sense of the original. In 1.450, for example, many translators have introduced the image of dancing, which is not appropriate to the destructive power of hail, and not one Virgil uses:

such pelting multitudes of hailstones will dance ratting of the roofs.

such showers of myriad hail
Will dance their pattering tap-dance on the roof.

when heavy hail comes down and rattles horribly on roofs.

c. Otherwise return the translation to a more literal rendering than those of my predecessors, though still aiming for a pleasing integration of sound and sense. So the opening to the famous praise of Italy:

But neither Media's wealth of citron groves,
Nor fair Ganges, nor Hermus rolling down
his golden silt, may vie with Italy's glory -
Not Bactria, no, not India, or all Panchaia
So rich in spicy sands.

But not the groves of Persia, that land of fabled wealth,
not the Ganges, nor that Asian river that's muddy with gold
may vie with Italy's excellence, no, not the Afghan's land,
not India nor the fabled place of sand with frankincense.

Not Persia with its sumptuous groves and soils, nor handsome
Ganges, nor the stormy Hermus with its gold
can match the fame of Italy. Not even Bactria,
India, nor Panchaïa with its incense sands.

4. Informal contractions of can't, 's, etc. have been used occasionally, which was certainly taboo a half century ago and even now is often thought to be too colloquial for Virgil. But it's little more than the elision of Latin, and to forbid its use is often to leave out words, as the English hexameter is never as terse as the Latin.

5. I've generally written a strict iambic, only breaking the metre for special effects. The impetuous chariot race that closes Book One: (1.510-12) where the extra syllables of 'oblivious' that have to be swallowed
echo the wild confusion of horse and rider:

as, from the opening barrier, the chariot
but races yet more reckless round the track, horses
oblivious of burden, rider's tangled words or rein.

The dreadful description of Cocytes, where the patterning is more free verse:

4.477-79: -all that the black mud
and loathsome reeds of Cocytes within the sluggish
waters of that hated lake bind fast.
And the 'singing' lines that end the work (4. 565-6):
So Virgil: a youth once dallying with shepherd's lays,
who sang of Tityrus beneath the beech tree's shade.

Often I've maintained the iambic across whole sections, following a feminine line ending with an opening trochaic on the next line. Continuity is the aim, the content being picked up by a sentence, developed naturally and handed to the next.

6. In contrast to translators from Dryden down, I've tried to avoid poeticisms and adopt Virgil's manner, which is to write sturdy sense and make what verse is possible by word choice and arrangement.

7. The content is sometimes carried over two or more lines, further than Virgil does, though I have generally tried to avoid too weak an ending for any particular line, i.e. not with an article, or even prepositions unless in idiomatic use. The English hexameter lacks the concluding spondee of the Latin, but, by way of compensation, can be fashioned into organized paragraphs in the matter expected of extended compositions. In lines 1. 63-70, for example, where my rendering forms phrases with these numbers of feet: 5. 7. 4. 7. 6. 6. 6. 6, the lines still conclude forcefully:

So where the earth is rich and heaviest | I'd have
the teams of oxen ploughing from the earliest months, | |
and, with the furrows heaped in lines, | then leave the force
of summer sun to crumble clods to dust.|| But should
the land prove unrewarding all the same, | it can
be laid in shallow ridges till Arcturus rise, |
for weeds will not there suffocate the smiling crops, |
nor moisture here evaporate from sandy soils.||

Nonetheless, the corresponding division by content in the Latin is quite different, the concluding spondees pointing the lines in a way the simple English hexameter cannot.

8. My aim was for an expressive and pleasing verse, but not one that replicates the features of the Latin, which is well beyond my powers. Where, for example, Virgil chooses his goddesses for the verbal patterns their names make, I have only (with difficulty) been able to retain the metre. 1.343:

And for the concluding lines of the Orpheus and Eurydice story (4. 523-7) I have had to employ quite different effects:

But even then, the head torn off from marble neck
and midway floating down the Oegian Hebrus stream,
the voice cried out : Eurydice, and from his ice-
cold lips and fleeting breath Eurydice was heard
reverberating and murmuring down the river's length.

And so on: Latin has many advantages over English verse.

Virgil's text can be condensed, gnomic in places, and what we understand of the Georgics as a whole determines how we translate individual lines. Generations of scholars have studied Virgil, and those interpretations, if coloured by the preoccupations of their times, are still relevant, making what is needed, it seems to me, not so much a strikingly original translation {31} {32}, but one of considered richness. The eighteeth century rhapsodized over the beauties of Virgil's landscapes. The nineteenth century spoke of Virgils brooding and intense pity for human nature. The twentieth century looked more closely at its ambiguities and relationships to other poets' work. All observations reverberate in the text, and problems appear with the simplest lines:

1.4: apibus quanta experientia parcis (literarily: with thrifty bees how much experience) has been translated as:

Lembke: how much practical knowledge to keep frugal bees.

I incline to Putnam's reading, not simply for the partnership of man and nature in the Georgics noted in the ebook Introduction, but because thrifty otherwise makes little sense. We have to change thrifty to something like fastidious. What trials are best to settle the fastidious bees? Is an attractive line, but a vast expansion of what Virgil wrote.

Further notes can be found in the ebook Glossary, but I have kept the annotation light, or (shades of Nabokov) it would swell to a book in itself, quite out of keeping with a literary translation. Also largely unnoted are the individual departures from previous renderings, though I have greatly benefited from reading the work, as from the academic studies listed in the References and Resources. To them all I owe an immense debt of gratitude.

References can now be found in a free pdf compilation of Ocaso Press's Latin pages.