Gavril Romanovich Derzhavin (1743-1816) rose from penniless obscurity to the highest offices of state, but is remembered today as Russia's greatest poet before Pushkin. By force of inspiration, this minor aristocrat completed the hopes of eighteenth century predecessors like Katemir, Trediakovsky and Lomonosov, and lived long enough to hear Pushkin recite his first poems, recognizing a talent that would usher in a new sensibility. Thew poet is best known for his odes, into which he packed a great deal of elegy, humour and satire. Though seeming rather high-minded and over-long, they are also exceptionally accomplished and powerful. 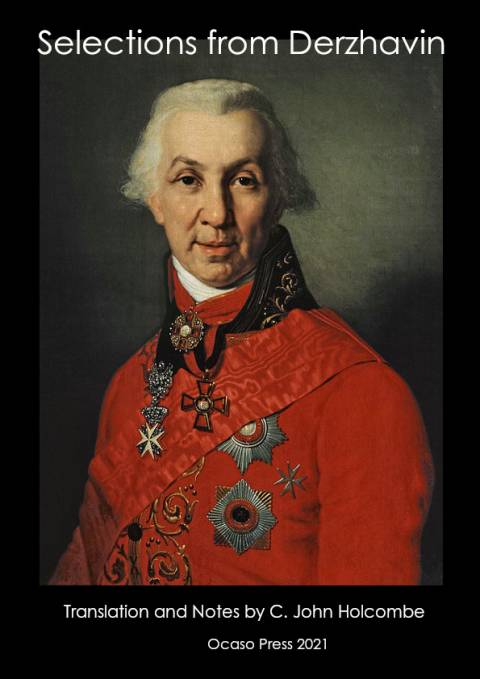 The translations in this ebook include all the more important odes, plus a selected number of shorter pieces like the 'Bullfinch' and 'Peacock. Also included are the attractively informal 'Invitation to Dinner', and 'Life at Zvanka'. The included biography is the fullest available online.

It was Derzhavin far more than Pushkin who created the writer's claim to be the social conscience of Russia. Ironically, the gift came from the poet's marked disabilities, the contrariness that so exasperated contemporaries expecting deference to wealth, social position and court procedures. Hemmed in by a social order to which he did not wholly belong, Derzhavin's own scruples became his lodestone, first in his Pugachev adventures, and increasingly in his writings. His first book, 'The Chitagalai Collection', published anonymously and at his own expense in 1774, followed an unusual order: translations of four of Frederick the Great's odes, then his own poems, plus a dedication to General Bibikov followed by one to the empress Catherine, but was otherwise modest and unassertive. Two important odes followed: 'On the Death of Prince Meshchersky' and 'To Rulers and Judges', the first having the blood-chilling note of great poetry and the second causing some censorship problems. Then came 'Felitsa' in 1782, which portrayed the empress as an exceptionally competent, hard-working and sensible woman.

A free ebook: translations of Derzhavin poems in pdf format.

Derzhavin Poems and Their Achievement

Pushkin and his contemporaries thought Derzhavin's ode 'The Waterfall' the greatest poem in the Russian language. It is exceptionally long, however, and is for the most part the standard piece, a three-year labour of love to the poet's hero and part patron, Prince Grigory Potemkin: foremost statesman and military leader. I have only given the opening verses, where Derzhavin appears in a different guise, as the keen student of nature, almost the Romantic poet of contemporary Germany or England.

Meaning is often compressed in Derzhavin's work, even tangled in places, but that semantic density can be further enhanced by rich colour imagery and sound effects. Russian verse subsequently took Pushkin's more mundane and useful route, but Derzhavin's rugged vitality was later of interest to iconoclastic poets like Mandel'stam and Mayakovsky escaping the effete world-weariness of late Silver Age poetry. His work gave orientation and stability in a world beset by revolution and fast-changing styles. Derzhavin was also the first major Russian poet to add everyday, mundane words to the literary mix, though Nekrasov probably found his own way to the practice.

Like many poets, Derzhavin was not a good judge of his own work. Much of his time at Zvanka was taken up with the Anacreonic poems, which show a sane and balanced sensuality, not always harmless, but indulged by his second wife. Worse, Derzhavin never tired of extolling the virtues of his tragedies, though they were not much liked at the time, nor treasured since. So straightforward a character as Derzhavin did not have the reading, balance and detachment needed for literary criticism, and he was often baffled by his contemporaries' single devotion to his odes. Yet it is these of the Derzhavin poems that tower over the two centuries of Russian poetry: rugged, individual and irreplaceable in the world-class literature that Russia was now beginning to produce.

Excerpt: On the Death of Prince Meshchersky

The voice of time, whose metal ring
perplexes with its frightful gloom,
yet calls and calls as though to bring
my life still closer to the tomb.
5. And light itself, the first we saw,
brought death's sharp teeth into our gaze.
The scythe-like lightning strikes, and days
are grain upon that threshing floor.

No destiny eludes those jaws,
10. no creature known can haste away.
In throne and cell the small worm bores;
to elements the tombs decay.
All fame will yawning time erase.
As rivers rushing to the sea
15. flow days and years, eternity:
that greedy realm not long delays.

We skirt that abyss all our lives
in which, at last, we headlong fall.
With life there's death, and all that thrives
20. is also under death's dark pall.
Cruel is death, and obdurate:
the stars are subject to its will:
the sun itself fades out to chill:
whole worlds will death intimidate.

25. Only we poor mortals have belief
in us ourselves, forever on,
but death comes quietly, like a thief,
and what was life is promptly gone.
He comes when we're afraid of none,
30. who know our ends are not yet soon:
like thunder heard in hills at noon
our flight to pride will come undone.

Son of easy pleasure's cause,
now where, Meshchersky, do you hide?
35. For you have left these living shores,
and on the dead must now abide.
This is your finger, yet there's no
occasion in that how? or why?
We only ever weep and cry,
40. 'we born into this world of woe.'

Comfort, joy, abundant love,
where mercy lived with shining health:
is not that chill of blood enough
that sorrow dim our spirit's self?
45. Where feast was once is coffin's pall,
where brightly spoke each laughing head,
the dead are howling to the dead,
and their last pallor looks on all.

It stares at all things, every king,
50. whatever be the power they held,
It sees each rich and pompous thing
as gold and silver idols felled.
It glowers at beauty, breath alive,
at mind in thought, at the sublime:
55. for those in pride who boldly climb,
it sharpens up its gleaming scythe.

In death, with trembling state and fear,
are pride and poverty combined.
We talk like God, but dust is near.
60. Today such flattering hopes we find,
tomorrow, where is man then cast?
And in an hour we barely miss
confusion enters that abyss,
and, like a dream, our age has passed.

65. And like a dream, the sweetest dream,
my youth has wholly fled away.
Now beauty seems an empty theme,
nor merriment has much to say.
70. Today I'm not so well-to-do,
nor thirst for honour as in days
so long debauched by love of praise,
yet still there calls the voice I knew.

But even courage knows its day,
the hoped-for glory fails its part.
75. Wealth and riches pass away;
the seat of passion, the flooding heart
will pass as all things pass. And we
with happiness less close to hand,
find all things false. From where I stand,
80. this doorway to eternity

pronounces all must die, today,
tomorrow, Perfiliev. Why grieve
that your fond friend went on his way,
and left the world we all must leave?
85. Life is heaven's brief, passing gift,
so make your peace both deep and sure:
ensure your parting soul is pure
and bless the blow of fate when swift.

Tsarina, wise, omnipotent
and of the Kirghuz-Kaisak race:
one whose powerful mind has bent
to find the path, the faithful trace
5. that Khlor, the young tsarevich
may climb the highest mountain’s reach.
Say, you whose rose can have no spine,
whose very virtue is designed
to captivate my heart and mind,
10. say how your counsel would incline.

Felitsa, give me sound instruction
in worldly opulence that’s true,
have the passions find reduction
and in this world be happy too.
15. How admirable is now your voice.
Your son escorts me in this choice.
Alas, my urge to fight but thins
against the vanities of wealth,
and if today I curb myself,
20. tomorrow I’m a slave to whims.

Unlike the mirzas in  your court,
you often go about on foot.
The plainest food is what you’ve sought
where honest fare is simply put.
25. Your hard-won rest is much the same:
you read and write by candle flame.
To us mere mortals from your pen
comes sensible but fervent bliss,
and even cards you choose to miss
30. as I do morn to morn again.

You do not care for masquerades
and to a club are quite unknown:
habit and custom, neither fades,
nor is there dancing by the throne.
35. You do not haunt Parnassus, nor
what séances are practiced for.
No eastern rule is in your gaze,
who traced an honest path, both whole
and modest. So your waking soul
40. but works for other’s useful days.

But I, of course, have slept till noon,
which fumes of pipe and coffee show.
My working day is one long swoon
within whose thoughts chimeras grow.
45. With captives under Persian skies
I arm myself in Turkish guise.
Still dreaming that I am the sultan
I make my piercing look oppress,
or captured by some other dress
50. will slip out quickly for a caftan.